In 1833, the Georgia Railroad was chartered in Augusta, Georgia, to build a railroad from Augusta to Athens with a branch to Madison. In 1835, the charter was amended to include banking. When the railroad finally opened in 1845, J. Edgar Thomson was the Chief Engineer and Richard Peters held the position of first Superintendent. At the time, several other railroads were then under construction. The Western and Atlantic Railroad had been chartered to build a line from 7 miles south of the Chattahoochee River, at a point called Terminus (present-day Atlanta) to Chattanooga, Tennessee (formerly known as Ross Landing). The South Carolina Railroad was constructing a route from Charleston, South Carolina to North Augusta, South Carolina (formerly Hamburg). The Memphis and Charleston Railroad was under construction from Memphis, Tennessee to Chattanooga. The Nashville and Chattanooga Railroad and the Louisville and Nashville Railroad were busy constructing rival lines between Louisville, Kentucky and Nashville, Tennessee. The Georgia Railroad made a decision to extend the Madison branch to Terminus (Atlanta), competing with the Central Railroad and Banking Company of Georgia (later known as the Central of Georgia Railroad), which along with the Macon and Western Railroad, were vying for traffic through Charleston's rival port of Savannah, Georgia. By 1850, this railroad had laid 213 miles of track and was up to 232 miles by 1860. At the time, goods from the Mississippi and Ohio valleys had to be transported by riverboat to New Orleans and then via coastal steamships around the Florida Keys to reach the larger populated cities in the northeast. Cross-country shipping by rail to the ports of Charleston and Savannah made financial sense. The banking business quickly saw more success than the railroad side of the company. The Georgia Railroad and Banking Company was possibly the strongest bank in Georgia for many years. The bank smartly bought controlling interests in the Atlanta and West Point Railroad and the Western Railway of Alabama, which provided a nonstop line from Atlanta to Montgomery, Alabama, although the Western Railway of Alabama was standard gauge (4' 8½"), while all the other lines in the south were broad gauge (5' 0").

During the War Between the States, the Confederate States of America kept a gunpowder factory in Augusta. Carloads of gunpowder were transported on the Georgia Railroad to various battlefields in the "Western Campaign." Even though the Civil War heavily damaged railroads such as the Georgia Railroad, management used their substantial resources to restore operations as quickly as possible. The Georgia Railroad temporarily abandoned the Athens branch in order to secure enough rail to re-open its main line. Returning Confederate soldiers received free rides home on the company's limited rail network. The company also honored all Confederate script issued by their bank, and not a single depositor lost their savings even though Confederate money had no value. It helped that the Georgia Railroad and Banking Company was strong enough financially to honor those promises. At the same time, most of the other southern banks were not accepting any obligations related to Confederate currency. This helped to solidify the bank's reputation as one of the premiere banks in the southeast well into the 20th century. Designed by architect Max Corput, the Georgia Railroad Freight Depot was completed in 1869 and is the oldest building in Downtown Atlanta. The company was later re-chartered as the Georgia Railroad Bank, then a subsidiary of the First Railroad and Banking Company, which ultimately opened banks in Atlanta under the name of First Georgia Bank. In 1881, Colonel William M. Wadley , president of the Central Railroad and Banking Company of Georgia, personally leased the railroad properties of the Georgia Railroad and Banking Company, including the Atlanta and West Point and the Western of Alabama. Wadley assigned half of the lease to the Central and half to the Louisville and Nashville. After the panic of 1897, the Central entered into receivership and its portion of the lease lapsed. The lease was eventually reassigned to the Atlantic Coast Line Railroad. In 1902, the ACL acquired controlling interest in the L&N, which meant the Georgia, the Atlanta and West Point and the Western of Alabama were to become non-operating subsidiaries of the Atlantic Coast Line.

When the Savannah and Atlanta Railroad was constructed, it connected with the Georgia Railroad at Warrenton, Georgia, and the Georgia Railroad now competed with the Central of Georgia Railroad for traffic to and from Savannah. Before long, however, the ACL came to dominate the Augusta interchange traffic through its Charleston and Western Carolina Railway subsidiary and the ACL's own spur from its main line at Florence, South Carolina, so the Georgia Railroad could now compete with the Seaboard Air Line Railroad and Southern Railway for traffic from Atlanta up the eastern seaboard. One unique feature of the Georgia Railroad and Banking Company’s charter was the fact that the legislature had given the corporation a tremendous tax break. Challenged many times in the courts, the company always won. The charter also called for daily except Sunday passenger service. Company attorneys advised management to maintain passenger service on all lines so as to not violate the charter, and the Georgia was one of the last railroads to operate mixed trains in the "Lower 48," well into the Amtrak era. By 1967, the Georgia Railroad reported 833 million revenue-ton-miles of freight and three million passenger-miles; at the end of the year it operated 331 miles of road and 510 miles of track. The Georgia Railroad was jointly leased to the Atlantic Coast Line and the Louisville and Nashville, and was co-managed along with the Atlanta and West Point Railroad and the Western Railway of Alabama. The three railroads were operated as a system and were commonly known as the West Point Route. 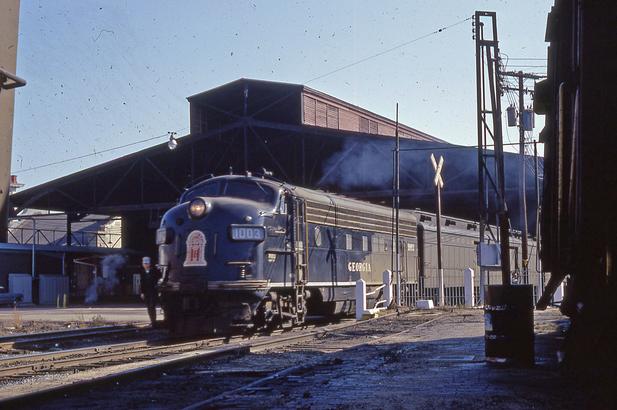