Green Bay and Western Railroad 2407, an ALCO RSD-15, at the Illinois Railway Museum.

A Green Bay and Western Slideshow.

Green Bay and Western Railroad
The Green Bay and Western Railroad (reporting mark GBW) was a Class I railroad serving central Wisconsin for almost 100 years before it was absorbed into the Wisconsin Central in 1993. The company was headquartered Green Bay, Wisconsin, and for much of its history the railroad was also known as the Green Bay Route. At the end of 1970 it operated 255 miles of road on 322 miles of track; that year it reported 317 million ton-miles of revenue freight.

Branch lines
Casco Junction - Algoma - Sturgeon Bay. See Ahnapee and Western Railway (Coming Soon)
Iola (Iola Northern Railroad) Opened 1893 from Scandinavia - Operated by the GBW and purchased by them in 1914. Abandoned October 1956. Note - The proposed extension to Prentice to connect with the Soo Line was never constructed.
Waupaca (Waupaca Green Bay Railway) Opened 1907 from Scandinavia. Purchased by GBW in 1922. Closed 1947 (Passenger traffic ceased some years previously). The Waupaca Line was promoted by local business interests to provide competition to the Wisconsin Central. The Waupaca Depot was unusual in that it was the former Evangelical Lutheran church.
Biron Branch Opened sometime between 1881 and 1896 from Wisconsin Rapids. Status 2011 - Open. Although only 2.2 miles long from Wisconsin Rapids it proved valuable as connection to paper industries.
Stevens Point (Stevens Point and Northern) Opened January 1882 from Plover. Purchased by GBW May 1896. Status 2011 - Open.
La Crosse Branch (La Crosse to Onalaska) 6.38 miles. Opened 1876. Abandoned 1922. Connected to main line via trackage rights over the C&NW from Marshland.

Frankfort services ended around 1980 and those to Ludington in 1990. 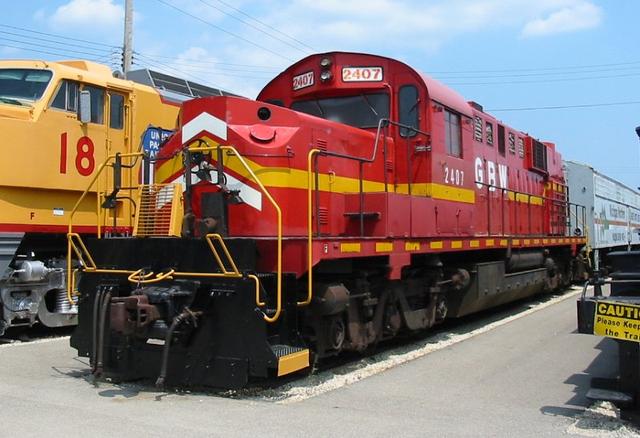