The Gulf Coast Lines
The Gulf Coast Lines (GCL) was a railroad system that comprised four main former Class I railroads, ( as well as several small ones) that ran from New Orleans, Louisiana through Baton Rouge and Houston southward to Brownsville, Texas, on the border of Mexico. Originally chartered as subsidiaries of the Frisco Railroad (St.L-SF), the system became independent in 1916 and was purchased by the Missouri Pacific Railroad (MP) in 1925.

The parent company of the independent Gulf Coast Lines was the New Orleans, Texas and Mexico Railway (NOT&M), incorporated in Louisiana on February 28, 1916, which bought the property and assets of the Frisco-owned New Orleans, Texas and Mexico Railroad. The NOT&M offices were in New Orleans, and it owned or leased a number of other railroads in Texas and Louisiana, operating them all together as the Gulf Coast Lines. As of December of 1916, the total trackage operated by the GCL system was 1,013 miles, including branches, sidings, trackage rights, and other leased lines.

The Gulf Coast Lines was the original project of B. F. Yoakum, chairman of the board of the Rock Island and Frisco Lines. It was Yoakum's plan to use the Rock Island and Frisco, together with several railroads to be built in Texas and Louisiana and now known as the Gulf Coast Lines, to form one continuous line of railroads extending from Chicago, St. Louis, and Memphis on to Baton Rouge, Houston, Brownsville, Tampico, and Mexico City. The Frisco and Rock Island were combined under his leadership in 1905 and known as the "Yoakum Line.

The first part of the GCL was the St. Louis, Brownsville and Mexico Railway (StLB&M). Construction was by the B.F. & P.M. Johnson Co. of St. Elmo, Illinois, which started in 1903 at Robstown, Texas (near the port city of Corpus Christi) and went on to Brownsville, Texas. The line was opened on July the 4th of 1904. At the end of 1907, the StLB&M was continued to Houston, with trackage rights through the Gulf, Colorado and Santa Fe Railroad between Houston and Algoa. It was the first railroad to reach the Rio Grande Valley, having a tremendous effect on the region. Thanks to the railroad and irrigation, the Valley became a major agricultural center. In Hidalgo County, land that sold for twenty-five cents an acre in 1903 (a year before the StLB&M arrived), was selling for fifty dollars an acre in 1906 and for as much as $300 an acre by 1910. By 1905, B.F. Yoakum had purchased the Beaumont, Sour Lake and Western Railway (BSL&W), which connected with the StLB&M at Houston. 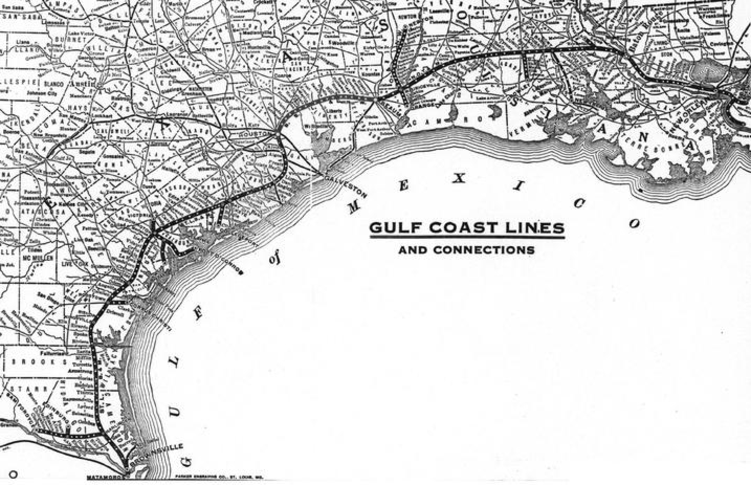 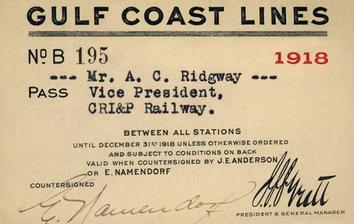 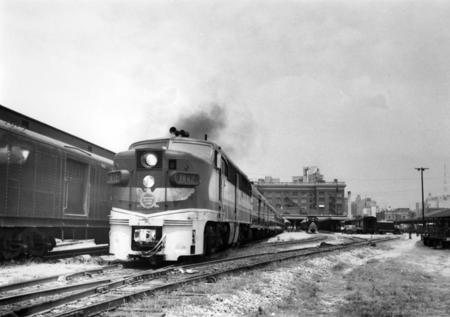 After 1925, the following railroads were purchased by the Gulf Coast Lines division of Missouri Pacific, though maintaining their separate legal identities.

The next link eastward was the New Orleans, Texas and Mexico Railway, construction of which began in 1905 from Anchorage, Louisiana (opposite Baton Rouge), to DeQuincy, Louisiana, with trackage rights purchased from Kansas City Southern Railway from DeQuincy to Beaumont. NOT&M trains were ferried across the Mississippi River at Baton Rouge until 1947, several years after the Huey P. Long Bridge (carrying a highway and a railroad track) was built in 1940. This segment opened for service on September 1, 1909, with trackage rights via the Louisiana Railway and Navigation Company from Baton Rouge to New Orleans; after 1916, GCL trains used trackage rights on the parallel Illinois Central route instead. Yoakum's planned extensions of the GCL from Brownsville to Tampico and Mexico City, as well as from Baton Rouge to Memphis, never materialized. In 1913, the Frisco and the GCL roads fell into bankruptcy, which was terminated in 1916 when Frisco's receivers were ordered by a court to sell the Texas-Louisiana lines. The StLB&M and the BSL&W were acquired by the New Orleans, Texas and Mexico, and operated under the Gulf Coast Lines name after that.

After 1925, numerous Missouri Pacific passenger trains used the various segments of the Gulf Coast Lines route, which although legally separate entities for tax, tariff, and accounting purposes, were marketed to the public as a seamless continuation of MoPac passenger service. One notable passenger train of the postwar era was the streamlined Valley Eagle, introduced on October 31, 1948, which covered the 372 miles between Houston, Corpus Christi, and Brownsville in 8-1/2 hours at an average speed of 44 miles per hour. Two trainsets of five cars each were built by ACF to make the daytime run in both directions. The train was discontinued on July 1, 1962. Also in the postwar era, MoPac's Houstonian and Orleanean ran between New Orleans and Houston, covering the 367 miles in nine or ten hours.

A Gulf Coast Lines [ass from 1918 issued to the Vice President of the Chicago, Rock Island and Pacific.