Gulf, Mobile and Northern Railroad
The Gulf, Mobile and Northern Railroad (reporting mark GMN) began in 1917. Its predecessors were the New Orleans, Mobile and Chicago Railroad, New Orleans Great Northern Railway. The first World War had forced government operation upon the company; and in 1919, when it again became an independent railroad, it chose Ike Tigrett to charter its new course. At the end of 1925 GM&N operated 466 miles of road and 574 miles of track; that year it reported 419 million ton-miles of revenue freight and 12 million passenger-miles. By 1940, the GM&N was 827 miles in length.

Mobile and Ohio Railroad
The M&O was chartered in January and February 1848 by the states of Alabama, Kentucky, Mississippi, and Tennessee. It was planned to span the distance between the seaport of Mobile, Alabama and the Ohio River near Cairo, Illinois.

The Mobile and Ohio Railroad was conceived after hard times in Mobile following the Panic of 1837. The port was not generating the business that it had before the panic and businessmen and citizens in the city were inspired with a plan for a railroad to restore commerce to the city. The first section of track opened for service in 1852 between Mobile and Citronelle, Alabama and was constructed in 5 ft gauge. The line made it to Columbus, Kentucky on April 22, 1861, steamboats were then used to connect with the Illinois Central Railroad at Cairo.

The start of the Civil War shortly after the completion of the line saw it converted to military use and it quickly became a military target for both sides during the war. Following the conflict the M&O had to be almost entirely rebuilt and was facing near total financial ruin due in part to an unpaid debt of $5,228,562 that had been owed by the Confederate government. It was placed in receivership in 1875 and did not emerge until eight years later.

By 1870 the operators had seen the need to complete the line all the way to Cairo and make it the northern terminus instead of Columbus, but financial problems stood in the way. Finally on May 1, 1882 the extension to Cairo was opened. The company then acquired the St. Louis and Cairo Railroad, which was narrow gauge. They converted it to 4 ft 8 1⁄2 in standard gauge and had a line from Mobile to St. Louis, Missouri.

In 1896 the company decided to build a line from its Columbus, Mississippi, terminal toward Florida. On June 30, 1898 the Tuscaloosa to Montgomery line opened in Alabama, along with two short branch lines. That same year they decided to build a 39-mile line from Mobile to Alabama Port and Bayou La Batre, naming it the Mobile and Bay Shore Railway. It was completed in 1899.

The M&O's stockholders and bondholders accepted a stock exchange plan in 1901 from Southern Railway. A merger of the two was attempted in 1902 but vetoed by Mississippi governor James K. Vardaman. Thereafter the M&O continued operations under Southern's control. From 1908 the M&O was considered to be a highly prosperous railroad, but net income declined sharply after 1926 and by 1930 the M&O had a net deficit of almost $1,000,000. On June 3, 1932, the M&O went into the receivership yet again. Southern was accused of having violated the Clayton Antitrust Act by using the M&O for its own profit at the expense of the M&O, though the case was dropped in 1933. Southern sold its M&O bonds in 1940 to the Gulf, Mobile and Northern Railroad. The GM&N was then combined with the M&O to form the Gulf, Mobile and Ohio Railroad.

From 1952 to 1972 the headquarters of the GM&O were in Mobile, Alabama at 104 St. Francis street. The President of the GM&O Railroad during this period was G.Paul Brock. The Railroad retained the passenger terminal at Beauregard Street for additional offices.

The GM&O Railroad was the first "large" railroad in the United States to replace all its steam locomotives with diesels.

On February 11, 1998 the Illinois Central was purchased by the Canadian National Railway (CN) with the integration of operations beginning on July 1, 1999. 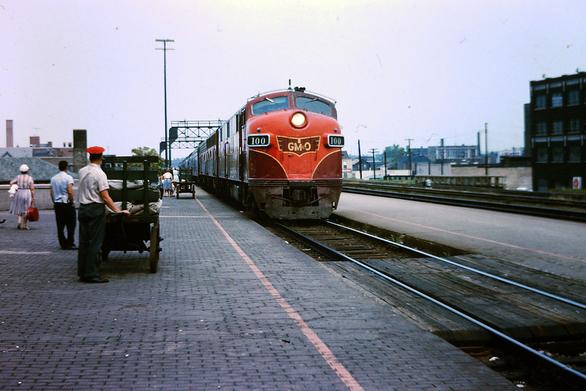 Gulf, Mobile and Ohio Railroad
The Gulf, Mobile and Ohio (reporting mark GMO) was a Class I railroad in the central United States whose primary routes extended from Mobile, Alabama, and New Orleans, Louisiana, to St. Louis and Kansas City, Missouri, as well as Chicago, Illinois. From its two parallel lines through eastern Mississippi, the GM&O also served Montgomery and Birmingham, Alabama, as well as Memphis, Tennessee. The railroad operated from 1938 until 1972, with headquarters in Mobile, Alabama.

In the media
Sonny Boy Williamson recorded the song GM&O Blues in 1945.

A GM&O EMD E7 and passenger cars were featured in the 1967 film In the Heat of the Night. Although the film's opening and ending shots of the GM&O are implied to be in a fictionalized version of Sparta, Mississippi, GM&O had ceased all passenger service south of St. Louis, Missouri eight years before filming was done in 1966. The actual filming location was Sparta, Illinois. The location where the GM&O locomotives and cars were filmed was in Sparta Illinois also. The train was leased from GM&O with a train crew to comply with union and operating rules of the road. The train came from Metro St. Louis, Missouri and traveled south along a GM&O right of way towards Sparta Illinois. At the time of filming, GM&O had not merged yet with the Illinois Central Railroad. The opening scene of the film shows the train crossing a main street in Sparta at night with the bright headlamp on the lead engine approaching town from an overhead shot. This was done using a scaffold across the tracks. This scene shows Virgil exiting the train and entering the depot station. The train was then driven south to an available turntable and parked for the night turning the engines around for the return trip to Sparta to shoot the final scene which was shot the following day and was among the final scenes of the film showing Virgil boarding the train and saying goodbye to Gillespie. As the train leaves Sparta, a close up shot of Virgil riding in a passenger car was taken by helicopter as the train travels the opposite direction with the scene expanding the view showing it meandering through the countryside as it leaves Sparta.

In popular music, the GM&O line is referenced in Adrian Belew's "The Rail Song," a nostalgic song about the heyday and subsequent decline of the American railroads. Originally on 1983's Twang Bar King album, the song can also be found on the Desire of the Rhino King compilation and in an acoustic version on both The Acoustic Adrian Belew and the Salad Days compilation.

The album cover of the 1989 Traveling Wilburys song End of the Line features an upside down photograph of the Ann Rutledge at Lincoln, Illinois in 1953.

A Gulf, Mobile and Ohio Slideshow.