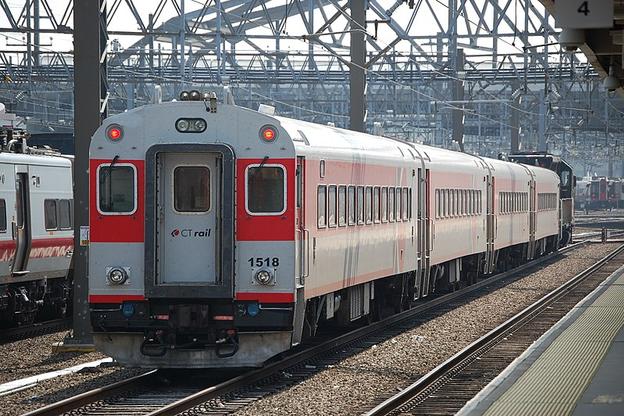 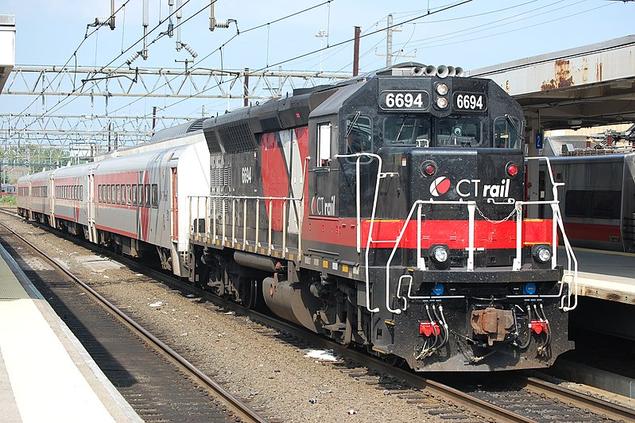 Hartford Line
The Hartford Line is a commuter rail service between New Haven, Connecticut, and Springfield, Massachusetts, using Amtrak's New Haven–Springfield Line. The project is a joint venture between the states of Connecticut and Massachusetts, with support from the federal government as well. CTrail-branded trains provide service along the corridor, and riders can use Hartford Line tickets to travel on board most Amtrak trains along the corridor at the same prices. The service launched on June 16, 2018.

Operation
Fares and service
Connecticut DOT provides commuter train service on the line under its new CTrail branding; these trains are currently operated by TransitAmerica Services and Alternate Concepts Inc., operating as a joint venture, under a 5-year, $45 million contract. Amtrak also operates intercity rail trains on this corridor; Amtrak fares along the corridor are equal to their Hartford Line equivalents, and passengers can use Hartford Line tickets to ride Amtrak New Haven–Springfield Shuttle and  Northeast Regional trains along the line. (The only Amtrak train on the corridor that doesn't participate is the once-daily Vermonter.)

Tickets from New Haven to Hartford are $8 and from New Haven to Springfield $12.75, both roughly half as much as what Amtrak's fares were before Hartford Line service began in June 2018. Discounts for bulk purchases of tickets and commuter passes are also offered. Tickets can be purchased at ticket vending machines (TVMs) at all stations, except for Windsor and Windsor Locks, where the on-board surcharge will be waived. Windsor and Windsor Locks will have ticket machines by around mid-September 2018.

Eight round-trip commuter trains on weekdays are operated under the CTrail brand, with half terminating at Hartford and the remaining four continuing north to terminate in Springfield. Amtrak provides an additional eight New Haven-Springfield round trips, two of which are Shuttles added to the schedule upon launch of the Hartford Line in June 2018. This makes for a total of sixteen round trips between New Haven and Hartford, twelve of which operate the full line to Springfield. On weekends and holidays, CTrail operates six New Haven–Hartford round trips and three New Haven–Springfield round trips; along with Amtrak's pre-existing schedule, this makes for a total of twelve–thirteen round trips offered on weekends. This includes the CTrail train that will be extended from Hartford to Springfield daily as part of a schedule update on November 12, 2018.

Rolling stock
In December 2017, Connecticut signed an agreement to lease 16 MBB coaches from the Massachusetts Bay Transportation Authority for three years, at a cost of $4.54 million, with options to extend the lease for up to three more years. The 16 cars are operated in four-car consists in a push-pull configuration with GP40-2H locomotives transferred over from Shore Line East. The railcars required significant repair and repainting before entering service, leading the Connecticut DOT to request $2.3 million from the state legislature in April 2018.

On June 12, 2018, the Connecticut DOT published a press release stating that the Federal Railroad Administration had reversed its decision on allowing the Connecticut DOT to operate Hartford Line trains with non-accessible bathrooms until new ones are installed, saying "...the bathrooms must now remain locked until the modifications are complete and one accessible restroom per consist is available." Amtrak trains have fully accessible restrooms on board. The DOT claims they "will work aggressively to ensure restrooms are available on all trains early in 2019." Renovations are already being performed on spare cars.

Connecticut plans to buy new equipment for the Hartford Line, as a bulk purchase with Metro-North Railroad's Danbury and Waterbury branches, after about five years of operation, although replacing the leased equipment with the current Shore Line East Mafersa coaches that will be displaced by the Kawasaki M-8s remains an option.

Milepost: To be determined

History
Background
During the mid-1980s, due to the high cost of operating the New Haven–Springfield Line and the competing newly-constructed expressways, Amtrak removed 25 miles (40 km) of track, turning the line from a double-track line to a line with a single track with passing sidings. Of the 62 miles (100 km) between New Haven and Springfield, 23.3 miles (37.5 km) of double track and 38.7 miles (62.3 km) of single track were left.

In 1994, the Connecticut Department of Transportation (ConnDOT) conducted a feasibility study for a New Haven–Hartford service which envisaged three trips in the morning and three in the afternoon. It estimated that capital costs would be $4.4 million and that it would require an annual subsidy of $2.5 million. Ridership was projected at 1,000 per day. A revised and expanded proposal in 2001 contemplated service to Springfield and hourly service, with half-hourly service during peak periods. This would require $249 million in capital costs, both for rolling stock and to restore double tracking to the line. The service would require a yearly subsidy of $13 million but would carry 1,800–2,000 passengers daily.

Various delays initially prevented the service. One source was a lack of widespread support in the New Haven region. Although reestablishing service was briefly mentioned in the South Central Regional Council of Government's January 2001 Long Range Mobility Plan, it was not until 2003 that the commuter service provision began to be consistently listed among key transportation priorities in the annual Greater New Haven Chamber of Commerce Legislative Agenda.

The New Haven–Hartford–Springfield Commuter Rail Implementation Study, released in 2005 by ConnDOT, recommended half-hour peak service, with new stations at North Haven/Hamden, Newington, and Enfield. No action was taken following the study, as proposed schedules did not link well with those of the New Haven Line and ridership projections were low (particularly for northbound morning and southbound evening trips).

Plan
The plan called for the improvement of existing stations and the construction of new stations along the line. To facilitate frequent and bi-directional service, the line incorporates newly installed double track totaling 27 miles (43 km) as well as 2 miles (3.2 km) of new passing sidings. Five new interlockings were built and new signal systems were installed, including the installation of Positive Train Control. Bridges and culverts on the line have been repaired, rehabilitated or replaced.

Funding
In January 2010, $40 million of stimulus funds were approved to double-track 10.5 miles (16.9 km) of the corridor under the American Recovery & Reinvestment Act. In July 2010, Governor Jodi Rell asked the Connecticut State Bond Commission to authorize borrowing $260 million in an effort to attract additional federal matching funds, to double-track the remainder of the corridor, construct freight sidings, and improve signaling. These upgrades, together with new rolling stock, should allow for two-way service during peak hours at speeds of up to 110 miles per hour (180 km/h). On August 17, 2010, Connecticut lawmakers authorized borrowing the $260 million.

On October 25, 2010, Governor Rell announced that Connecticut received an additional $120.9 million in funds from the federal government to fund the double tracking of the remainder of the line south of Hartford as well as station improvements in Wallingford, Meriden, Berlin and Hartford.

As of April 2011, Connecticut State officials had applied for $227 million from the federal government that would complete track improvements between Hartford and Springfield, Massachusetts. ConnDOT applied for the money to the Federal Railroad Administration, part of $2.4 billion that Florida governor Rick Scott rejected because of the spending it would require from his budget. In May 2011, Connecticut was awarded $30 million for track improvements in Hartford.

On August 15, 2012, the Federal Railroad Administration (FRA) granted a Finding of No Significant Impact (FONSI) on the line's environmental assessment, a major step towards the obligation of $121 million in federal funding for the line.

In February 2017, the state approved an additional $50 million in bonded funds for the project. The money will support design of the rebuilt Windsor and Windsor Locks stations and of the new stations at North Haven, Newington, West Hartford, and Enfield. It will also complete funding for four miles (6.4 km) of double track being added north of Hartford, and pay for design and environmental permitting for an additional 7.5 miles (12.1 km) of double track between Hartford and Enfield. If further funding is found to build these additional miles, it would complete the double-tracking of the line except for downtown Hartford and the aging Warehouse Point railroad bridge. The station in Newington was originally going to be located at Newington Junction, but due to local opposition, it will be located at Cedar Street in Newington instead, within walking distance to the Cedar Street CTfastrak stop.

The state intends to seek FRA funds to pay for construction of the new and rebuilt stations, the replacement of the Warehouse Point bridge, and a layover yard near Springfield.

In December 2015, the state announced that the cost of construction had increased by $135 million for a total of $570 million, and that service would not begin until January 2018.

On October 11, 2016, a 17-car track-laying train began work to build the second track on the southern half of the line. The train laid track from North Haven to Meriden in October 2016, and returned for Meriden to Newington in 2017. In 2017, the start date was pushed to May 2018 to accommodate construction of the new double track north of Hartford.

The new Wallingford replaced the old station on November 6, 2017. The rebuilt Meriden station opened on November 19, 2017, though final construction continued through December 18, 2017.

The connection between a new double track section from Hartford to Windsor and an existing section from north of Windsor to south of Windsor Locks was completed on September 25, 2018, leaving less than twelve miles (19 km) of single track on the line. The new section was not expected to allow additional service, but to increase reliability. 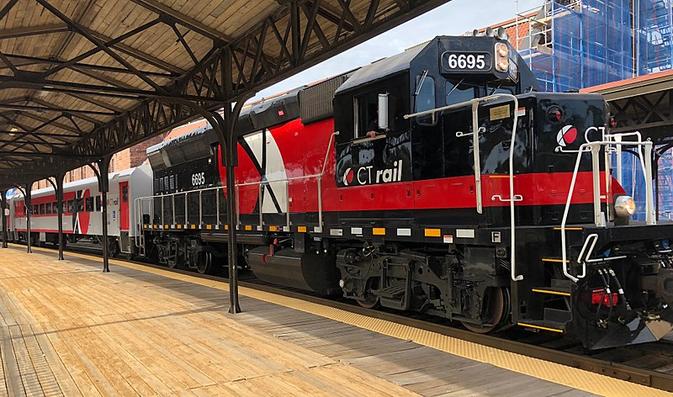 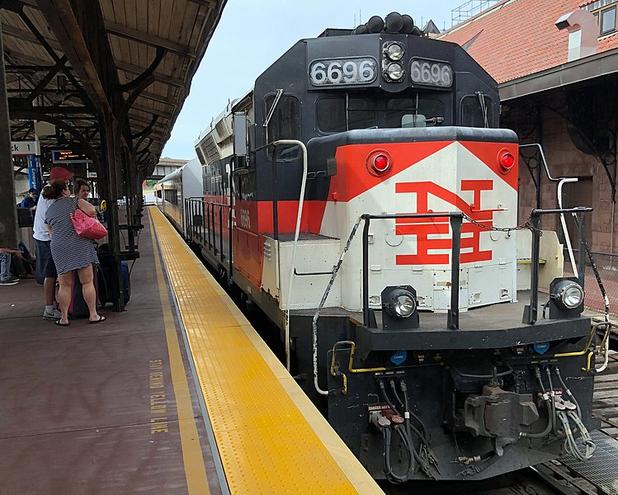