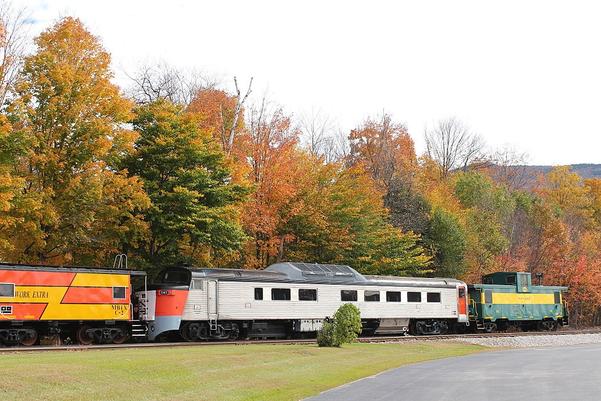 Part of the New Haven's Roger Williams trainset at the Hobo Railroad. 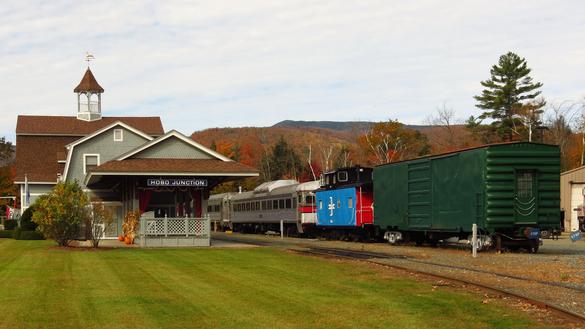 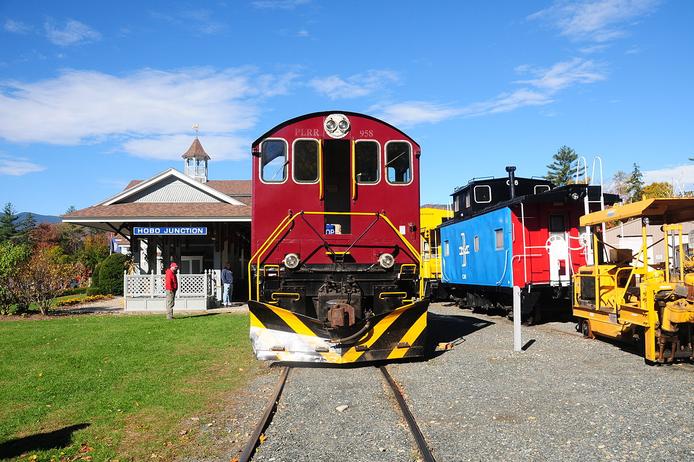 The Hobo and Winnipesaukee Scenic Railroads
The Hobo Railroad consists of two heritage railroads in central New Hampshire, in the United States.

History
In 1986 the Plymouth and Lincoln Railroad was formed with the purpose of operating a theme park and railroad out of Lincoln, New Hampshire. Edward Clark and his wife Brenda Reynolds Clark were the owners. Trains have been operating since then between Lincoln and Woodstock, a distance of 7 miles (11 km). The Clarks are related to the Clark family that operates Clark's Trading Post, an icon in the White Mountains for over 80 years.

After a few years of operating the railroad in Lincoln under the Hobo Railroad name, the railroad was invited to bid on the lease for the state-owned trackage from Tilton to Plymouth. They won the bid, and the Winnipesaukee Scenic Railroad was formed. The new line operated between Meredith Station and Lakeport siding at the end of Paugus Bay (Lake Winnipesaukee). Intermediate stops were made at Weirs Beach.

The railroad now holds the passenger rights on the entire State of NH-owned track running from Tilton to Lincoln, a total of 54 miles (87 km). This additional mileage allows the operation of many special excursion trains. The state owns another 19 miles (31 km) of track from Tilton to Concord, which is used by the New England Southern Railroad for freight customers.

In the summer of 1998, Edward Clark, founder of the railroad, died. Benjamin, his only son, assumed the post of President and promoted the business heavily.

The Lincoln Shops
From the mid-1990s, the Lincoln Shops have grown to be a major source of off-season revenue through its quality refurbishing and repair of numerous pieces of customer railroad equipment. Two Russell Snowplows and some subway tampers were rebuilt for the MBTA. The privately owned ex-New Haven Railroad Roger Williams was in for major restoration to like-new condition, along with four or five cabooses being repainted. The company's reputation for perfection increased the demand for the facility enough to make the business a 12-month operation. 2005 brought the three-car set of the Flying Yankee, under restoration, to the Lincoln Shops for completion.

Current activities
The railroad has some of the most diverse and scenic fall foliage trains in New England, whether lakeside or on a journey along the Pemigewasset River to the mountains. Since 2003 the railroad has promoted heavily this important season for tourism. It also benefits from its 1½ hour travel time from Boston. Bus groups, sometimes eight per day, converge in Meredith in the fall due to the town's location and to the offering of a full roast turkey dinner on the train catered by Hart's Turkey Farm Restaurant, also located in Meredith.

In winter 2005, the "Believe in Books Literacy Foundation" contracted with the railroad to provide a "Polar Express" out of Lincoln, to supplement the growing demand from the North Conway operation run by the Conway Scenic Railroad. The Tom Hanks movie of the same name was released in the 2004/2005 season, sparking even further interest.

Three ALCO S1 switchers (one from the Portland Terminal Company and two from the Maine Central Railroad), an ALCO S3 switcher from the Boston and Maine Railroad, and a former Rock Island Railroad EMD GP7 provide the motive power for the two railroads. Four former Erie Lackawanna Railroad cars and 6 former Budd RDCs from MBTA in Boston comprise the railroad cars that they use for operations.

By Jyothis (Own work) [CC BY-SA 3.0 (https://creativecommons.org/licenses/by-sa/3.0) or GFDL (http://www.gnu.org/copyleft/fdl.html)], via Wikimedia Commons