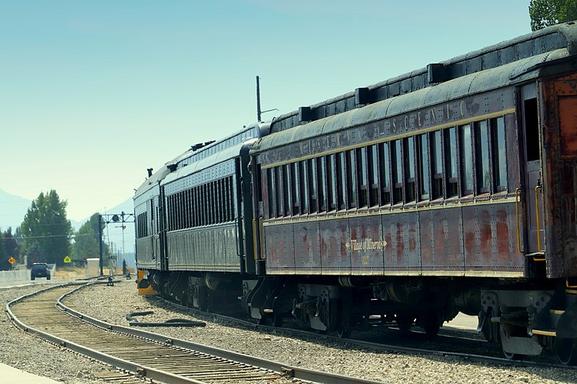 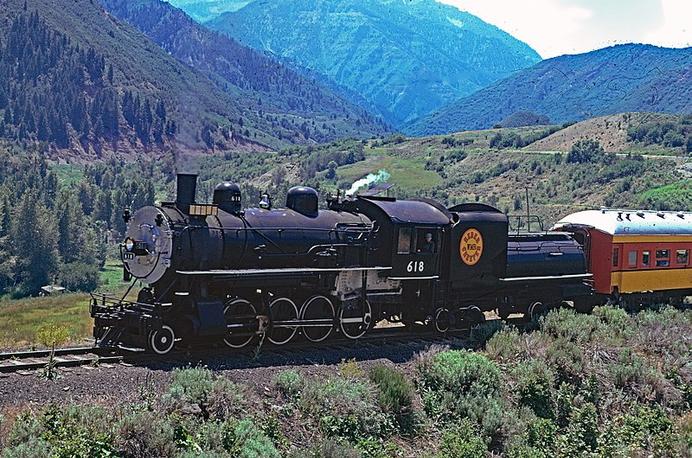 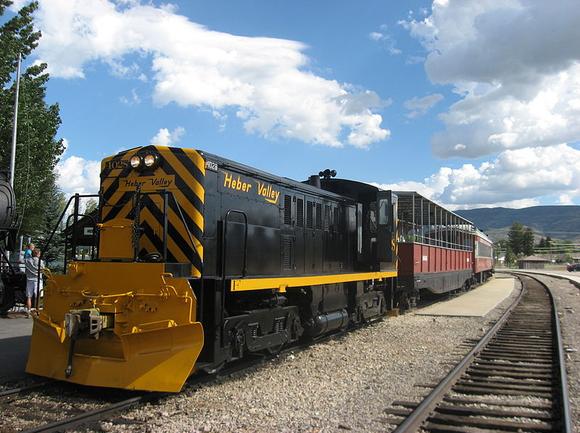 The railroad line is approximately 16 miles (26 km) long. A typical round trip ride on the train takes about 3 hours. There are a total of four passing sidings outside of the Heber yard limit. Notable landmarks seen from the train include Mount Timpanogos, Cascade Mountain, Deer Creek Dam and Reservoir, Provo River, Sundance Ski Resort, Tate Barn, and Soldier Hollow. A variety of wildlife including deer, eagles, fox, moose, turkeys, hawks, mountain lions (cougars), and beavers, have all been seen from the train as well.

Equipment
The Heber Valley Railroad has two 1907 Baldwin 2-8-0 Consolidation-type steam locomotives: former Union Pacific No. 618 and ex-Great Western No. 75, although they are both out of service pending completion of their 1,472 day inspections and service. Also on display is former Columbia Steel Company 0-6-0 No. 300 built by Baldwin in the 1920s.

The HVRX is home to four EMD diesel-electric locomotives: Ex-Union Pacific EMD NW2 No. 1011, Ex-Union Pacific EMD NW2 No. 1043, Ex-Union Pacific EMD GP-9 No. 296, and Ex-USATC EMD MRS-1 No. 1813. As well as Ex-United States Army Transportation Corps Baldwin (rebuilt with a Caterpillar prime mover) RS4TC-1 number 4028. It also has a former United States Army Davenport 44-ton diesel-electric locomotive No. 1218, which is very similar to a GE 44-ton switcher. Recently in 2018, the railroad purchased 3 GP9's which are numbers 52, 72, and 77 from New England's Pan Am Railway. With the arrival of the GP9s, the Heber Valley’s former U.S. Army MRS-1 will be retired.

History
The line operated by the HVRX was formerly part of a Denver and Rio Grande Western Railroad branch line that connected Heber City to Provo, Utah. The branch line was completed in 1899 and operated freight (and passenger) service until the line's abandonment in 1967.

The line was saved for tourist use and was reopened in 1970 when No. 618 and other equipment was brought up the line from Provo. The track between Provo and Vivian Park was later removed and converted into a recreational trail. During the 1970s and 1980s the railroad operated as the "Heber Creeper". In the late 1980s this railroad went out of business.

Citizens in the Heber area successfully petitioned the State of Utah to help save the railroad, leading to creation of the Heber Valley Historic Railroad Authority in the early 1990s. Since this time the railroad has seen considerable growth. The railroad operates as a non-profit 501(c)(3) organization.

During the 2002 Winter Olympics the railroad was part of the Olympic Steam Team, carrying spectators to the Soldier Hollow Olympic venue. The railroad's No. 618 and 75 steam-engines, were joined by the Nevada Northern Railway Museum's No. 93 steam-engine, in pulling eight-car trains full of passengers, to the Soldier Hollow depot where they disembarked and continued to the venue entrance on a horse-drawn sleigh. The day prior to the Opening Ceremony of the games, all three locomotives were combined into one triple-headed train, and used to transport the Olympic flame from Soldier Hollow to Heber City as part of the torch relay.

Current operations
The railroad's main depot is located in Heber City. Other passenger terminals are located at Soldier Hollow (near Midway, Utah) and Vivian Park. The railroad operates year-round, and features special event and evening train rides. Among its named trains are the Provo Canyon Limited, a three-hour round trip excursion to Vivian Park and the shorter Deer Creek Express to Deer Creek Reservoir. The railroad can be seen from various points along U.S. Highway 189 between Heber City and Vivian Park and the whistle can be heard throughout the valley.

Locomotive No. 618 was used in the 2006 film, Outlaw Trail: The Treasure of Butch Cassidy. The locomotive, 100 years old as of July, 2007, ran from 2008-2010 in limited capacity and was then taken out of service for a major overhaul and restoration, as required to meet Federal Railroad Administration (FRA) safety standards. The non-profit railroad raised the $750,000 required for the project and the 618 engine will not be retired. The rebuild should give the engine another 30 years of service. As of July 2018 No. 618 is out of service while a 1,472-day inspection and rebuild is completed. No. 75 has been under restoration since 2003 (15 years as of 2018).