Notes of interest
The IAIS and the railroad infrastructure were purchased from Heartland by Railroad Development Corporation in 2003.

In 2004, IAIS was awarded the E. H. Harriman Award for its safe operational record.

History
The railroad was formed on November 2, 1984, using former Chicago, Rock Island and Pacific Railroad tracks between Chicago, Illinois, and Omaha, Nebraska. It was in partnership with real estate firm Heartland Rail Corporation that the IAIS was able to operate. Heartland purchased the right-of-way and infrastructure for $31 million (of which, $15 million was a loan from the Iowa Railway Finance Authority), and then leased it to IAIS for operations.

The railroad's mainline is roughly a straight line between these two terminal cities with a branch line connecting Bureau to Peoria, Illinois. In recognition of the railroad's Rock Island Railroad heritage, the IAIS logo uses a shape similar to the original railroad's logo.

Operations
Operations on the railroad are controlled by track warrants rather than signals. When the IAIS took control of the track, the signal system was already damaged beyond repair, so the trains were operated by warrant control. A centralized traffic control system has yet to be installed on the railroad's mainline.

Beginning in the mid-1990s, the IAIS mainline has been identified as a potential route for high speed passenger train service between Wyanet, Illinois (where the IAIS could be connected to the BNSF Railway), the Quad Cities and Iowa City, Iowa, as part of the Midwest Regional Rail Initiative (MRRI). The ultimate goal of the MRRI is to establish passenger train routes in a hub-and-spoke formation with Chicago as the hub that allow for speeds up to and above 110 mph. Estimate of capital costs to upgrade the IAIS mainline to allow passenger train speeds of 79 mph between Wyanet and Iowa City is $54.9 million, according to an April 2008 study by Amtrak. 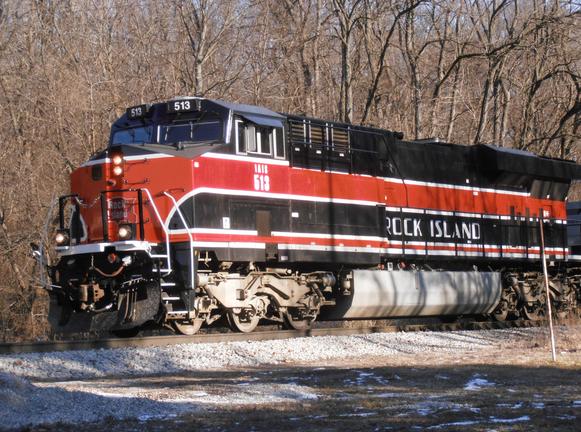