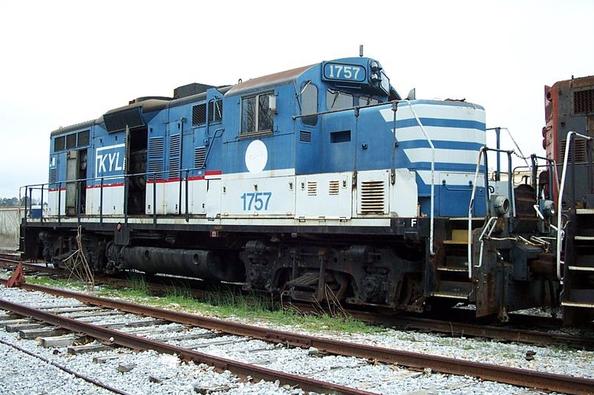 Kyle Railroad
The Kyle Railroad (reporting mark KYLE) is a regional railroad line that runs from North Central Kansas into Eastern Colorado. It is based in Phillipsburg, Kansas and runs on 561 miles (903 km) track, mostly the former Rock Island Railroad  Chicago to Denver main line. The Kyle was owned by Rail America from 2002 to 2012. Genesee & Wyoming, Inc.  bought RailAmerica in late 2012.

History
The Kyle Railroad was formed for the 1982 Northern Kansas Harvest season by the Willis B. Kyle Organization, which consisted of several railroad properties, including the San Diego and Arizona Eastern Railway, the Oregon, Pacific and Eastern Railway, the Cumbres and Toltec Scenic Railroad and the Pend Oreille Valley Railroad. Included was about 243 miles (391 km) of trackage from Belleville, Kansas to Limon, Colorado, with trackage rights over the Cadillac and Lake City Railroad From Limon, Colorado to Colorado Springs, Colorado. Officially, on September 16, 1980, The Kyle Railroad signed with the MSPA (Mid-States Port Authority) a contract for the Hallam, NE to Limon, CO and Belleville, KS to Clay Center, KS line, as well as 90 miles (140 km) of trackage rights over the Union Pacific Railroad from Limon, CO to Denver, CO, totaling 455 miles (732 km). The Kyle Railroad acted as the MSPA's operator of these lines.

Recently the Kyle Railroad bought the tracks on which it operates from the MSPA.

Power for the trains consisted of former Burlington Northern Railroad ALCO Century 425s, most tracing their heritage to the Spokane, Portland and Seattle Railway; as well as more recently adding to their roster, a number of MK5000C's provided by the Utah Railway (a fellow subsidiary of Genesee & Wyoming).

Traffic
The railroad handles mostly agricultural commodities, although limited amounts of construction materials are carried. KYLE transported around 20,000 carloads in 2000.

Railroads of the U.S.A

A Kyle engine undergoes repair at the Eastern Alabama Railway in Sylacauga, Alabama, in March of  2003.