Coal and capital in the Gilded Age

Since all locomotives of the time were steam-powered, many railroads had favored coal as their engines' fuel source after wood-burning models had been found unsatisfactory. The L&N guaranteed not only its own fuel sources but a steady revenue stream by pushing its lines into the difficult but coal-rich terrain of eastern Kentucky, and also well into northern Alabama. There the small town of Birmingham had recently been founded amid undeveloped deposits of coal, iron ore and limestone, the basic ingredients of steel production. The arrival of L&N transport and investment capital helped create a great industrial city and the South's first postwar urban success story. The railroad's access to good coal enabled it to claim for a few years starting in 1940 the nation's longest non-refueled run, about 490 miles from Louisville to Montgomery, Alabama.

In the Gilded Age of the late nineteenth century there were no such things as anti-trust or fair-competition laws and very little in the way of financial regulation. Business was a keen and mean affair, and the L&N proved a most formidable competitor. It could and did simply freeze out upstarts like the Tennessee Central Railway Company from critical infrastructure like urban stations. Where that wasn't possible, as with the Nashville, Chattanooga and St. Louis Railway (which was older than the L&N), it simply used its financial muscle—in 1880 it acquired a controlling interest in its chief competitor. A public outcry resulted sufficient to convince the L&N directors that there were limits even to their power. They discreetly continued the NC&StL as a separate subsidiary, but now working with, instead of in competition with, the L&N.

Ironically, in 1902 financial speculations by financier J.P. Morgan delivered control of the L&N to its rival Atlantic Coast Line Railroad, but that company made no attempt to control L&N operations, and for many decades there were no consequences of this change.

20th century
IThe World Wars brought heavy demand to the L&N. Its widespread and robust network coped well with the demands of war transport and production, and the resulting profits harked back to the boost it had received from the Civil War. In the postwar period, the line shifted gradually to diesel power, and the new streamlined engines pulled some of the most elegant passenger trains of the last great age of passenger rail, such as the Dixie Flyer, the Humming Bird, and the Pan-American.

Though well past its hundredth anniversary, the line was still growing. In 1957, the Nashville, Chattanooga & St. Louis was finally fully merged. In the 1960s, acquisitions in Illinois allowed a long-sought entry into the premier railroad nexus of Chicago, and some of the battered remains of the old rival, the Tennessee Central, were sold to the L&N as well.

In 1971 the Seaboard Coast Line Railroad, successor to the Atlantic Coast Line Railroad, purchased the remainder of the L&N shares it did not already own, and the company became a subsidiary. During this period, in common with other lines, the L&N was cutting back passenger service. Amtrak, the government-formed passenger railway service, took over the few remaining L&N passenger trains in 1971. In 1979, amid great lamentations in the press, it ceased passenger service to its namesake cities when Amtrak discontinued The Floridian, which had connected Louisville with Nashville, and to Florida via Birmingham.

By 1982 the railroad industry was consolidating quickly, and the Seaboard Coast Line absorbed the Louisville & Nashville Railroad entirely. The merged company was known as "SCL/L&N", "Family Lines," and was depicted as such on the railroad's rolling stock. During the next few years several smaller acquisitions resulted in the creation of the Seaboard System Railroad. Yet more consolidation was ahead, and in 1986, the Seaboard System merged into the C&O/B&O combined system known as the Chessie System. The combined company became CSX Transportation (CSX), which now owns and operates all of the former Louisville and Nashville lines.

Legacy
A number of historical groups and publications devoted to the line exist, and L&N equipment is well represented in the popular model railroading hobby. The L&N Railroad is also the subject of at least two songs, the 2003 Rhonda Vincent bluegrass song "Kentucky Borderline", and "The L&N Don't Stop Here Anymore" by Jean Ritchie and performed by Michelle Shocked. Dutch blues/rockband The Bintangs had a hit in the Dutch charts in the late 1960s with "Ridin' on the L&N".

Passenger operations
While the Humming Bird and Pan-American, both from Cincinnati to New Orleans and Memphis, were two of the L&N's most popular passenger trains that ran entirely on its own lines. However, the Humming Bird later added a Chicago to New Orleans section in conjunction with the Chicago & Eastern Illinois Railroad utilizing the Georgian north of Nashville. (The Official Guide of the Railroads, February, 1952) The railroad also hosted other named trains, including:

The L&N was one of few railroads to discontinue a passenger train that was en route. On January 9, 1969, as soon as a judge lifted the injunction preventing its discontinuance, the L&N discontinued its southbound Humming Bird at Birmingham, in mid-run from Cincinnati to New Orleans. The 14 passengers continuing south did so by bus.

At first, the line was used during the Civil War hauling supplies, and troops. Later on, the Greensburg Branch was built switching off the Lebanon Branch on the outskirts of Lebanon, making its way through Campbellsville, Kentucky, and on to the end of the line in Greensburg, Kentucky.

The Lebanon Branch had several trains traveling on it such as Lebanon's local trains Nos. 21 (southbound) and 22 (northbound), along with the mail and express train, the Flamingo, and freight trains. The line stayed this way until passenger service ended in the 1950s. After this, freight trains occupied the line with coal trains from the Appalachian Mountains in eastern Kentucky. The line continued under this operation until the 1980s, when the Lebanon Branch and the rest of the L&N system came under control of the Seaboard System Railroad. The L&N and Seaboard merged, and later, Seaboard and the Chessie System merged to create CSX. With multiple branch lines through the area, the decision was made that the Lebanon Branch was to be abandoned and taken up.

The portion of the branch from New Hope to Lebanon Junction is preserved by the Kentucky Railway Museum, which purchased the line from New Hope to Boston. The Kentucky Railway Museum operates passenger trains for tourists and visitors from their headquarters in New Haven to Boston (about eleven miles). The museum hauls three to seven passenger cars with their steam locomotive, L&N 152, or one of the historical diesels like the Monon BL-2 No. 32 or ex-Santa Fe CF-7 No. 2546.

Preservation
There are several preservation organizations of L&N equipment and L&N lines, such as the Kentucky Railway Museum, The Historic Railpark and Train Museum in Bowling Green, Kentucky, and the L&N Historic Society.

The city of Atlanta, Georgia is home to the General and the Texas, two 4-4-0 locomotives originally built for the Western and Atlantic Railroad, which was later leased to L&N predecessor Nashville, Chattanooga, and St. Louis. The lease of the W&A was passed to, and renewed by L&N and its successors. The General and the Texas became famous for being participants in The Great Locomotive Chase during the Civil War. The General had been placed on display in the railroad's Union Depot in Chattanooga in 1901. In 1957, the L&N removed the engine and restored it to operating condition. The engine pulled the railroad's wooden center-door Jim Crow combine coach No. 665 as it traveled throughout the eastern U.S. as part of the observance of the Civil War Centennial, including a visit to the 1964 New York World's Fair. Between 1966 and 1971, a legal battle ensued between the railroad and the city of Chattanooga as the former had planned to send the engine to Georgia, while the latter claimed to be the owners of the engine. After the dispute was settled, the engine was formally presented to the state of Georgia in 1971. The engine currently resides at the Southern Museum of Civil War and Locomotive History in Kennesaw, Georgia, while the Texas is on display at the Atlanta Cyclorama & Civil War Museum in Atlanta's Grant Park.

The Kentucky Railway Museum consists of many pieces of L&N equipment, as well as a portion of the Lebanon Branch. The Museum owns the following L&N equipment: K2A Light Pacific 4-6-2 No. 152, a steam locomotive; heavyweight coaches Nos. 2572 and 2554; an observation car; heavyweight combine No. 1603; combine coach No. 665; sleeper the Pearl River, the Pullman coach Mt. Broderick which was used by the L&N; several baggage cars; an steam-powered crane, and E-6 diesel locomotive No. 770. All of the last seven pieces of equipment listed need restoration.

The Historic Railpark and Train Museum owns or operates several pieces of L&N equipment, including an E-8 diesel locomotive, a Railway Post Office car, dining car No. 2799, a sleeping car, an observation car, along with a Jim Crow combine in need of major overhaul.

There are several other museums that own L&N equipment, including the Bluegrass Railroad Museum. 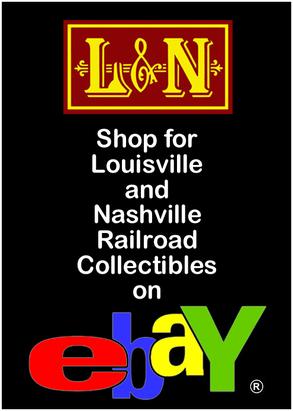 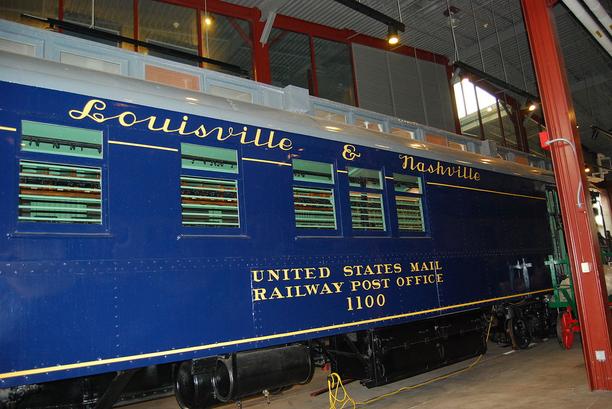 Chartered by the state of Kentucky in 1850, the road grew into one of the great success stories of American business. Operating under one name continuously for 132 years, it survived civil war and economic depression and several waves of social and technological change. Under Milton H. Smith, president of the company for thirty years, the L&N grew from a road with less than three hundred miles of track to a 6,000-mile system serving thirteen states. As one of the premier Southern railroads, the L&N extended its reach far beyond its namesake cities, stretching to St. Louis, Missouri; Memphis, Tennessee; Atlanta, Georgia; and New Orleans, Louisiana. The railroad was economically strong throughout its lifetime, operating both freight and passenger trains in a manner that earned it the nickname, "The Old Reliable."

Early history and Civil War
Its first line extended barely south of Louisville, Kentucky, and it took until 1859 to span the 180-odd miles to its second namesake city of Nashville. There were about 250 miles of track in the system by the outbreak of the Civil War, and its strategic location, spanning the Union/Confederate lines, made it of great interest to both governments.

During the Civil War, different parts of the network were pressed into service by both armies at various times, and considerable damage from wear, battle, and sabotage occurred. (For example, during the Battle of Lebanon in July 1863, the company's depot in Lebanon, Kentucky was used as a stronghold by outnumbered Union troops). However, the company benefited from being based in the Union state of Kentucky, and the fact that Nashville fell to Union forces within the first year of the war and remained in their hands for its duration. It profited from Northern haulage contracts for troops and supplies, paid in sound Federal greenbacks, as opposed to the rapidly-depreciating Confederate dollars. After the war, other railroads in the South were devastated to the point of collapse, and the general economic depression meant that labor and materials to repair its roads could be had fairly cheaply.

Buoyed by these fortunate circumstances, the firm began an expansion that never really stopped. Within thirty years the network reached from Ohio and Missouri to Louisiana and Florida. By 1884, the firm had such importance that it was included in the Dow Jones Transportation Average, the first American stock market index. It was so active a customer of the Rogers Locomotive and Machine Works, the country's second largest locomotive maker, that in 1879 the firm presented L&N with a free locomotive as a thank-you bonus.