Lake Shore and Michigan Southern Railway
The Lake Shore and Michigan Southern Railway, established in 1833 and sometimes referred to as the Lake Shore, was a major part of the New York Central Railroad's Water Level Route from Buffalo, New York, to Chicago, Illinois, primarily along the south shore of Lake Erie (in New York, Pennsylvania and Ohio) and across northern Indiana. The line's trackage is still used as a major rail transportation corridor and hosts Amtrak passenger trains, with the ownership in 1998 split at Cleveland between CSX to the east, and Norfolk Southern in the west.

History
Early history: 1835–1869
Toledo to Chicago
On April 22, 1833, the Erie and Kalamazoo Railroad was chartered in the Territory of Michigan to run from the former Port Lawrence, Michigan (now Toledo, Ohio), near Lake Erie, northwest to Adrian on the River Raisin. The Toledo War soon gave about one-third of the route to the state of Ohio. Trains commenced operating, pulled by horses, on November 2, 1836; the horses were replaced by a newly arrived steam locomotive, Adrian No. 1, in August 1837.

The Buffalo and Mississippi Railroad was chartered in Indiana on February 6, 1835, to run from Buffalo, New York, to the  Mississippi River. The name was changed February 6, 1837, to the Northern Indiana Railroad, which would run from the eastern border of Indiana west to Michigan City on Lake Michigan. Some grading between Michigan City and La Porte was done in 1838, but money ran out.1850 map of the Michigan Southern Rail Road with connections LSMS double arch bridge
over the East Branch of the Huron River, just west of Norwalk, Ohio. A similar, but smaller-sized bridge, exists to the east in the Ohio town of Wakeman.

Around 1838, the state of Michigan started to build the Southern Railroad, running from Monroe on Lake Erie west to New Buffalo on Lake Michigan. The first section, from Monroe west to Petersburg, opened in 1839. Extensions opened in 1840 to Adrian and 1843 to Hillsdale. On May 9, 1846, the partially completed line was sold to the Michigan Southern Rail Road, which changed the planned western terminal to Chicago using the charter of the Northern Indiana Railroad. The grading that had been done was not used, as the grade was too steep, and instead the original Buffalo and Mississippi Railroad charter was used west of La Porte, IN. The Michigan Southern leased the Erie and Kalamazoo on August 1, 1849, giving it a branch to Toledo, OH and a connection to planned railroads east from Toledo.

Due to lobbying by the Michigan Central Railroad, a competitor of the Michigan Southern, the latter's charter prevented it from going within two miles of the Indiana state line east of Constantine. However the most practical route went closer than two miles west of White Pigeon. To allow for this, Judge Stanfield of South Bend, IN bought the right-of-way from White Pigeon to the state line, and leased it to the railroad company for about 10 years until the charter was modified to allow the company to own it.

The Northern Indiana and Chicago Railroad was chartered on November 30, 1850. Its initial tracks, from the Michigan Southern at the state line running west-southwest to Elkhart, IN then west through Osceola and Mishawaka to South Bend, IN, opened on October 4, 1851. The full line west to Chicago opened on February 20, 1852, (running to the predecessor of today's LaSalle Street Station, together with the Chicago and Rock Island Railroad north of Englewood, IL). A more direct line was soon planned from Elkhart east to Toledo, and the Northern Indiana Railroad was chartered in Ohio on March 3, 1851. On July 8, 1853, the Ohio and Indiana companies merged, and on February 7, 1855, the Northern Indiana and Chicago Railroad and the Buffalo and Mississippi Railroad were merged into the Northern Indiana Railroad. On April 25, 1855, that company in turn merged with the Michigan Southern Rail Road to form the Michigan Southern and Northern Indiana Railroad. In 1858 the new alignment (Northern Indiana Air Line) from Elkhart, IN east to Air Line Junction in Toledo, OH was completed. The company now owned a main line from Chicago to Toledo, with an alternate route through southern Michigan east of Elkhart, and a branch off that alternate to Monroe, MI. Also included was the Detroit, Monroe and Toledo Railroad, leased July 1, 1856, and providing a branch from Toledo past Monroe to Detroit.

Buffalo to Erie
The Buffalo and State Line Railroad was incorporated October 13, 1849, and opened January 1, 1852, from Dunkirk, NY west to Pennsylvania. The rest of the line from Dunkirk to Buffalo opened on February 22. The Erie and North East Railroad was chartered April 12, 1842, to build the part from the state line west to Erie, PA, and opened on January 19, 1852. On November 16, 1853, an agreement was made between the two railroads, which had been built at 6 ft (1,829 mm) broad gauge, to relay the rails at 4 ft 8 1⁄2 in (1,435 mm) standard gauge to match the Franklin Canal Company's railroad (see below) on the other side of Erie, and for the Buffalo and State Line to operate the Erie and Northeast. This would result in through passengers no longer having to change trains at Erie, and on December 7, 1853, the Erie Gauge War began between the railroads and the townspeople. On February 1, 1854, the relaying was finished and the first train passed through Erie. On May 15, 1867, the two companies between Buffalo and Erie merged to form the Buffalo and Erie Railroad.

Consolidations
In October 1867 the Cleveland, Painesville and Ashtabula Railroad leased the Cleveland and Toledo Railroad. The CP&A changed its name to the Lake Shore Railway on March 31, 1868, and on February 11, 1869, the Lake Shore absorbed the Cleveland and Toledo. On April 6 the Michigan Southern and Northern Indiana Railroad and Lake Shore merged to form the Lake Shore and Michigan Southern Railway, which absorbed the Buffalo and Erie Railroad on June 22, giving one company the whole route from Buffalo to Chicago. The main route passed through Dunkirk, NY, Erie, PA, Ashtabula, OH, Cleveland, OH, Toledo, OH, Waterloo, IN and South Bend, IN. An alternate route (the Sandusky Division) in Ohio ran north of the main line between Elyria and Millbury (not all track was laid until 1872). From Toledo to Elkhart, the Old Road ran to the north, through southern Michigan, and the through route was called the Air Line Division or Northern Indiana Air Line. Along with various branches that had been acquired (see below), the Monroe Branch ran east from Adrian, MI to Monroe, where it intersected the leased Detroit, Monroe and Toledo Railroad. At some point the original line to Toledo was abandoned west of the branch to Jackson, MI (Palmyra and Jacksonburgh Railroad), with the new connection at Lenawee Junction, the crossing between that branch and the line to Monroe.

While the original main line was to the south of Sandusky Bay between Toledo and Elyria, the northern alignment (the Sandusky Division) eventually became the main line.

Post-NYC: 1968–
In 1968 the New York Central merged into Penn Central, and in 1976 it became part of Conrail. In 1976, the Southern Division from Elyria to Millbury was abandoned, with parts of the former right of way now in use as a recreational trail, the North Coast Inland Trail. Under Conrail, the Lake Shore main line was part of the New York City-Chicago Chicago Line.

Amtrak's New York City-Chicago Lake Shore Limited runs along the full route from Buffalo west. The Capitol Limited joins in Cleveland at the "Amtrak Connection" from the former PRR C&P line, just east of the present Cleveland Station (MP 181), on its way from Washington, D.C.to Chicago. Passenger trains along the route originally terminated at LaSalle Street Station, but now run to Union Station, switching to the parallel former Pittsburgh, Fort Wayne and Chicago Railway (Pennsylvania Railroad) at a crossover in Whiting, Indiana(41.68480°N 87.49534°W) to get there.

The Ashtabula River Railroad Disaster
The Ashtabula River Railroad Disaster, also called the Ashtabula Horror, was the worst train disaster in American history when it occurred in far northeastern Ohio on 29 December 1876 at 7:28 p.m. The Lake Shore and Michigan Southern Railway Train No. 5, The Pacific Express, left a snowy Erie, Pennsylvania, on the afternoon of December 29, 1876. As The Pacific Express plowed through the snow and crossed a bridge over the Ashtabula River, about 100 yards (91 m) from the railroad station at Ashtabula, Ohio, the passengers heard a terrible cracking sound. In just seconds, the bridge fractured and the train plunged 70 feet (21 m) into a watery abyss.

The lead locomotive, The "Socrates" made it across the bridge, while the second locomotive, The "Columbia" and 11 railcars including two express cars, two baggage cars, one smoking car, two passenger cars and three sleeping cars and a caboose fell into the ravine below, then igniting a raging fire. The wooden cars were set aflame by kerosene-heating stoves and kerosene burning lamps. Some cars landed in an upright position and within a few minutes small localized fires became an inferno. The fire then caused the ice on the creek to melt and sent the wreckage even further into the freezing water.

The rescue attempt was feeble at best because of the ill-preparedness of the nearby station to respond to emergencies. Of 159 passengers and crew on board that night, 64 people were injured and 92 were killed or died later from injuries sustained in the crash (48 of the fatalities were unrecognizable or consumed in the flames.) It is unclear how many died of the fall, or drowning separate from the blaze.

The famous hymn writer Philip Bliss and his wife lost their lives in the disaster.

Twenty years later, in Ashtabula's Chestnut Grove Cemetery, a monument was erected to all those "unidentified" who perished in the Ashtabula Railroad disaster.

The disaster helped focus efforts to draw up standards for bridges including adequate testing and inspection. The bridge, designed jointly by Charles Collins and Amasa Stone, was the first Howe-type wrought iron truss bridge built. Collins was reluctant to go through with building the bridge calling it "too experimental." But he bowed to pressure from the railroad to approve construction.

Branches
A major branch of the LS&MS extended from Northeaster Ohio to the coal and oil fields of northwestern Pennsylvania terminating near Brookville, PA. Originally the line extended to the oil fields and refineries on the Allegheny River at Franklin and Oil City.

The line was later extended from Polk Junction, West of Franklin, to Rose, just West of Brookville, PA. Also added was a connector South from Franklin to the Allegheny River crossing on the new extension. This line included perhaps the most impressive engineering structures on the LS&MS (as well as the later NYC) with several large trestles, bridges and tunnels near Brookville, including a bridge-tunnel-bridge-tunnel-fill combination near Piney, and two magnificent trestles West of Brookville near Corsica. The New York Central used trackage rights over the Pennsylvania Railroad and Baltimore & Ohio Railroad to connect from Rose to NYC lines at Clearfield, PA.

There were several mines on this line near Brookville, as well as a connection to the Lake Erie, Franklin and Clarion (LEF&C) at Sutton, and connections to the Pennsylvania Railroad and, via the Pennsy, to the Pittsburgh & Shawmut at Brookville.

Once coal traffic dried up in the late 1990s, this line was severed and cut back to the mine at Piney. Many of the larger trestles were taken out in the late 2000s, reportedly on orders of the PUC, although the bridge across the Clarion River survived, as of 2015. 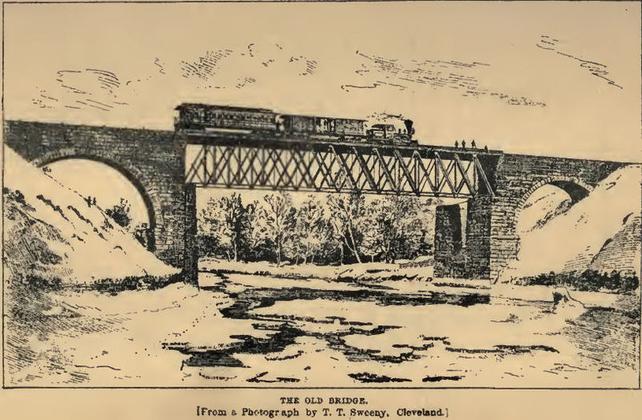 The Old Bridge before collapse, 1876. 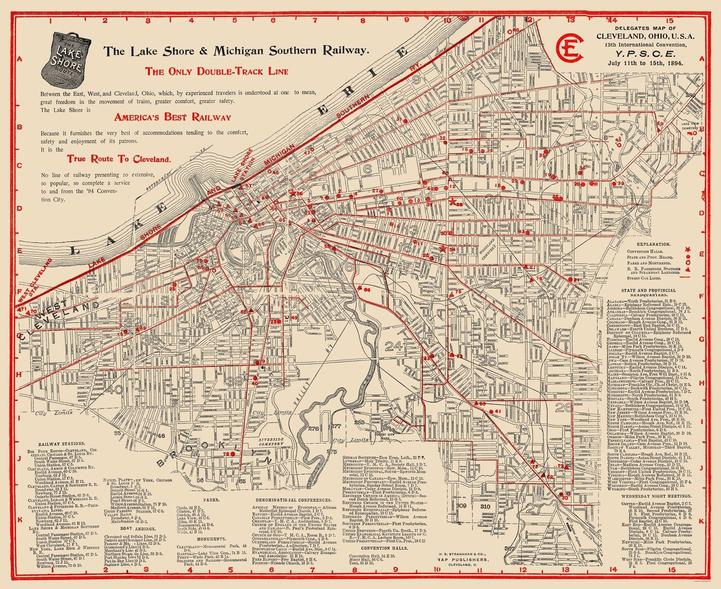 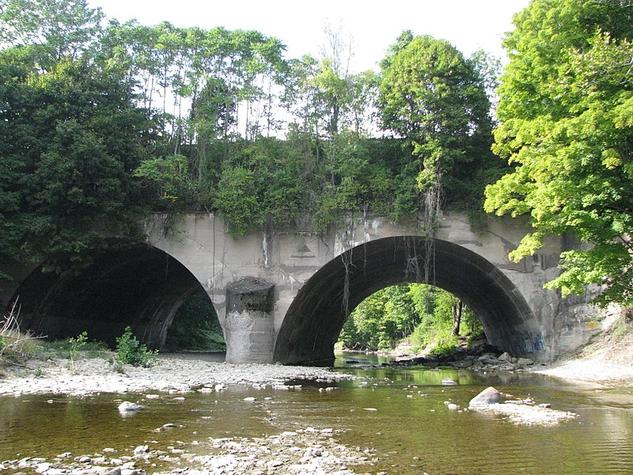