A Missouri-Illinois steam locomotive unloading railcars from a train ferry, circa 1955.

The Missouri–Illinois Railroad
The Missouri–Illinois Railroad (M-I) was a Class I railroad that operated in both Missouri and Illinois. The railroad operated around 200 miles of track on both sides of the Mississippi River and was connected by a train ferry. The Missouri-Illinois was originally formed in 1921 out of the bankrupt Illinois Southern (itself the consolidation of the old Illinois Southern and the Southern Missouri Railway - both created in 1900 to build a route from Mississippi to Kansas City) The Illinois Southern suffered a major disaster when it's steamship ferry sank in 1920, literally taking half of the railroad with it, thus forcing the railroad out of business. This foreclosure brought about the creation of the M-I, which took over the line. The Mississippi River & Bonne Terre RR (MR&BT) was the primary subsidiary of the M-I.

Formed on May 11, 1888 and spreading from Bonne Terre northward to Riverside, Missouri and connecting to the St. Louis, Iron Mountain & Southern, the MR&BT road operated over 66 miles of rail line at it's peak. It's primary resource was the wealthy mineral stronghold of southeastern Missouri. The Missouri Pacific acquired a controlling interest in both the M-I and the MR&BT on July 1st, 1929. These two short-lines were then consolidated. In 1950, the company owned 18 steam locomotives, 2 diesels, 2 passenger cars, 1 steamboat, and 1,074 freight cars. Passenger service was then limited to a weekday run by a gas-electric car on the Illinois side of the river. In 1970 it reported 359 million net ton-miles of revenue freight and zero passengers on 333 miles of road operated (138 miles owned). The Missouri-Illinois ran as a subsidiary until October of 1978 and was the last railroad to officially fall under the MoPac flag, being merged in November of 1978. 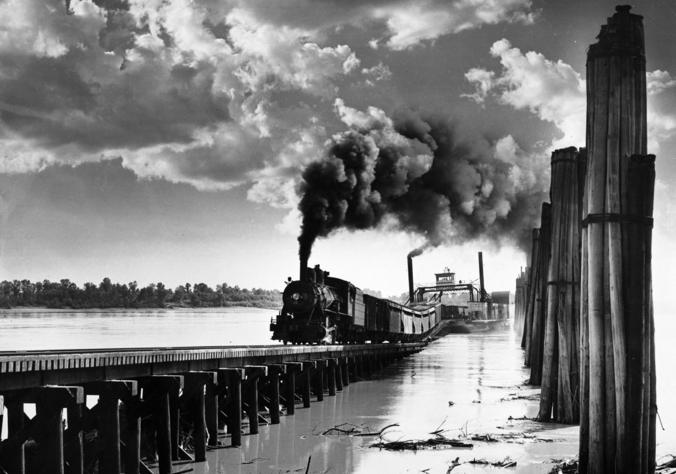 In 1950, the company owned 18 steam locomotives, 2 diesels, 2 passenger cars, 1 steamboat, and 1,074 freight cars. Passenger service was then limited to a weekday run by a gas-electric car on the Illinois side of the river.