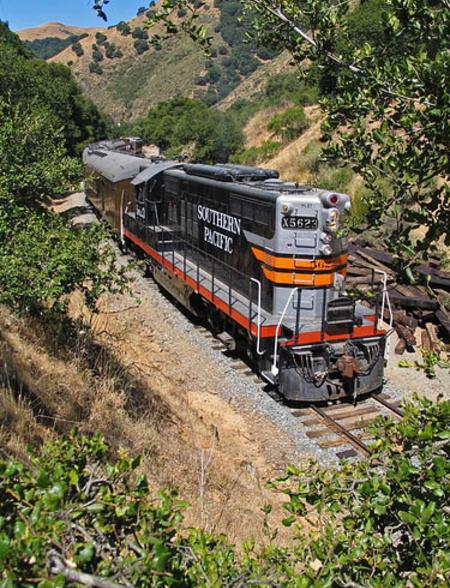 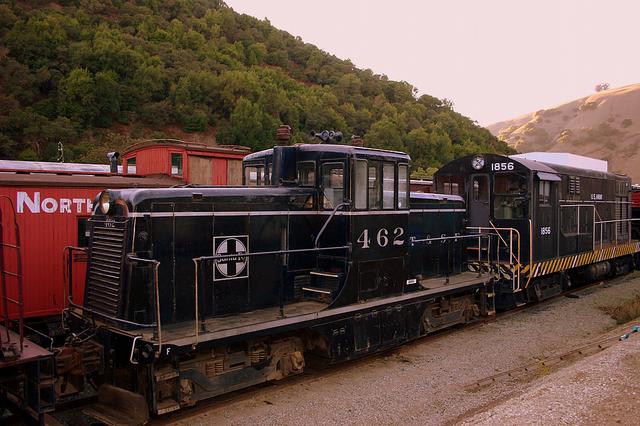 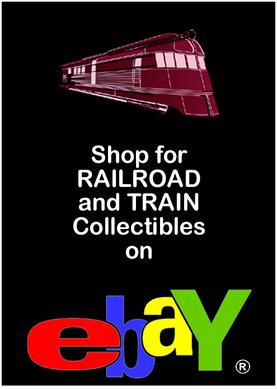 By Nate Beal (originally posted to Flickr as ATSF 44 tonner) [CC BY 2.0 (http://creativecommons.org/licenses/by/2.0)], via Wikimedia Commons 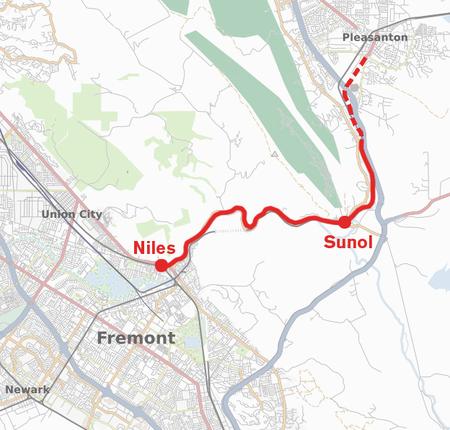 A passenger train pulled by Southern Pacific GP-9 No. 5623 travels east from Niles toward Sunol on the Niles Canyon Railway.

Niles Canyon Railway
The Niles Canyon Railway (NCRy) is a heritage railway running through Niles Canyon, between Sunol and the Niles district of Fremont in the East Bay of the San Francisco Bay Area, in California, United States. The railway is listed on the National Register of Historic Places as the Niles Canyon Transcontinental Railroad Historic District. The railroad is operated and maintained by the Pacific Locomotive Association which preserves, restores and operates historic railroad equipment. The NCRy features public excursions with both steam and diesel locomotives along a well-preserved portion of the First Transcontinental Railroad. The Golden Gate Railroad Museum moved its collection from San Francisco to the NCRy in 2007 for storage and limited operations after their home at Hunters Point Naval Shipyard was shut down for redevelopment.

History
The Niles Canyon Railway operates along a portion of the First Transcontinental Railroad constructed in the 1860s. The rail line through Niles Canyon was amongst the earliest to be built in California and provided the first rail connection between San Francisco Bay and the rest of the nation.

By 1866, the Western Pacific had built 20 miles (32 km) of track north and east from San Jose into what was then known as Alameda Cañon, when disputes between the railroad's backers and contractors stalled construction. The Central Pacific acquired the moribund Western Pacific as completion of the transcontinental railroad neared. Construction of the Western Pacific was revived by crews building south from Sacramento and over Livermore Pass (now Altamont Pass) to connect to the already completed track in Alameda Cañon. The new line was completed from Sacramento to San Jose and a waterfront terminal in Alameda in September 1869. This was just four months after the Central Pacific and Union Pacific met at Promontory Summit, Utah. Soon after, a more substantial terminal was established at the Oakland Long Wharf, from which ferries connected to San Francisco. These ferries continued to be the final link for passengers to San Francisco until 1958.

Railroad use
When built, the rail line through Niles Canyon was the primary route for overland traffic to and from the San Francisco Bay. A shorter rail line between Oakland and Sacramento was established via the California Pacific Railroad and Benicia by 1879. As a result, the original line became less used due to its longer route and its steep grade over Livermore Pass (known today as Altamont Pass). Passenger and freight trains on the line was reduced to local service only. This secondary status was maintained until the early 20th century when the Southern Pacific Railroad (successor to the Central Pacific) came under the leadership of E. H. Harriman. Freight traffic in and out of San Francisco had become too heavy for the ferries across the bay and across the Carquinez Strait to handle. An all land route via San Jose and Niles Canyon was available, but was overly circuitous. Several major capital improvement projects undertaken during this era, including the completion of the Coast Line and the construction of the Dumbarton Bridge, revitalized the original line through Niles Canyon. Steel bridges replaced the covered timber bridges at Farwell and Dresser and the small railroad town of Niles became an important junction as freight from the San Francisco Peninsula and produce from the Santa Clara and Salinas Valleys traveled through the canyon to points east. Despite these improvements, the few rebuilding programs by the railroad left the Niles Canyon line with many of its original cut-stone bridge abutments, culverts, and retaining walls from the Western Pacific's original right of way. Many of these constructions can still be seen today.

Preservation
The decline in San Francisco's status as a port with the advent of containerization, combined with the movement of produce traffic to the highways once again left the railroad through Niles Canyon with little business. Southern Pacific ceased its operations through the canyon in 1984, and deeded the land to Alameda County. Commercial rail operations through Niles Canyon now operate on a newer line, which is owned by Union Pacific (formerly Western Pacific) and also used by the Altamont Commuter Express (ACE) commuter train.

The Pacific Locomotive Association leased the right of way from the county and began working to reconstruct the track in 1987. The Niles Canyon Railway ran its first passenger train from Sunol on May 21, 1988. Passenger trains once again connected Sunol and Niles starting on April 9, 2006. The organization continues its work to extend and maintain the track along the line; restore its collection of railroad equipment; and operate historic demonstration trains for the benefit of the public. They plan to eventually extend their demonstration train service to Pleasanton, California.

The primary contributing resources of this Historic District include the following:

This one-story Stick style depot was built to Southern Pacific standard design No. 7 in 1884. Railroads such as the SPRR created standard depot designs to serve the many towns along its lines and represents an early application of standard architectural designs on a large scale. More than economical, this standardization created a predictable experience for employees and customers, and contributed to the company’s branding. A “combination depot” such as this housed facilities for a company agent, freight and passengers in one building and were designed to serve small towns such as Sunol. Out of at least eleven No. 7 depots built by the railroad, Sunol is the last one remaining. It is 19 feet wide and 67 feet long. The roof is divided into two parts with a gable roof over the east end, and an elevated hip roof over the freight room to the west. Decorative scroll cut brackets supported the eaves and similar bargeboards adorn the east gable end. The depot is divided into a series of rooms to serve a variety of functions. Starting from the east, the first room is the passenger waiting room. The agents office is next to the west and features a five-window bay on the track side from which the company’s agent would conduct business related to train operations. This room also contained a public counter at which business could be conducted with shippers, and a small ticket window connects this office with the passenger waiting room. The next room was the baggage room and is currently used for storage. Finally, the freight room takes up the rest of the building and is set about forty inches above grade so that its floor would be level with the floor of freight cars and teamsters’ wagons. This room is now used for exhibits and meetings. The freight room had been surrounded on three sides by a freight platform to facilitate the loading and unloading of freight from rail cars that would have been positioned next to this platform. A track had been located north of the building between the platform and the mainline for this purpose.
Dresser Bridge

The current bridge is a four-span structure, which features two early U.S. examples of riveted Warren through truss structures. The current superstructure was manufactured in 1906 by the American Bridge Company to replace the second wood truss at this location, which had been constructed in 1893. The original bridge at this location was completed in 1866 and consisted of two wooden Howe trusses. The original coursed-ashlar sandstone piers from 1865-66 are still in use and have been supplemented by concrete piers from 1893 and 1906. The bridge consists of two 125 ft. through Warren trusses and two 60 ft. deck plate girder spans with one at each end of the bridge. The abutments and piers are angled parallel to the course of the river below and are not perpendicular to the railroad’s alignment. As a result, the bridge spans are laterally offset from one another.

This bridge consists of the primary 196 ft. Pratt through pin-connected truss manufactured by Edge Moor Bridge Works in 1896, a 98 ft. Warren through pin-connected pony truss, three 30 ft deck plate spans from 1907, and a 70’ deck plate girder span from 1932. The original bridge at this location was also a single-span covered wooden Howe truss similar to the spans at Dresser. Stonework for two of the bridge’s piers dates to the original construction in 1865-66 while later concrete piers and abutments were added in 1896, 1907, and 1932. Caltrans encased the original eastern pier in steel and concrete in the 2000s to protect the highway below in the event of an earthquake. As at Dresser, the piers are at an angle to the bridge, and the spans are offset as a result.

Near the station of Bonita, this is a riveted through plate girder structure of five spans, which replaced the original covered Howe truss in 1899. The stone abutments and two of the piers date from the initial construction. This bridge consists of three 101 ft. and two 86 ft. through plate girder spans. Two additional concrete piers were added in 1899 to reduce the length of the new bridge spans.

Rail excursions
The railway's 2013 regular scheduled excursions run on the first and third Sundays each month in January–March and September–October; first and third Saturday and Sunday each month, April–August. Several trips are run, generally alternating between steam locomotives and diesel locomotives, with both open and enclosed passenger cars. See the railway's website for exact schedules and for special trains.

Group charters are also available, from a single caboose to an entire train. During the Christmas period, special "Train of Lights" trips run.

Passengers may board at the western end of the line in Fremont, at the Niles station site adjacent to the Union Pacific Coast Line on which Amtrak operates their Capitol Corridor and Coast Starlight services. The unrelated Niles Depot Museum displays model railroads and railroad artifacts nearby. Passengers may also board at the 1884 Sunol depot, which is the last surviving example of a Southern Pacific standard Combination Depot No. 7. Future plans for restoration of the historic Sunol Depot include interpretive educational displays.

Railroad equipment
The Pacific Locomotive Association has 8 steam and 13 diesel locomotives, and over 40 pieces of rolling stock.