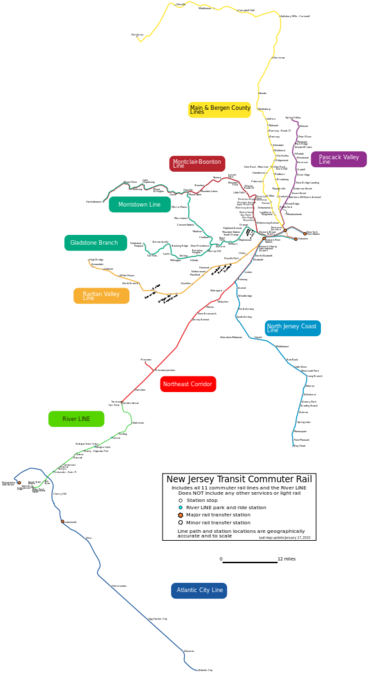 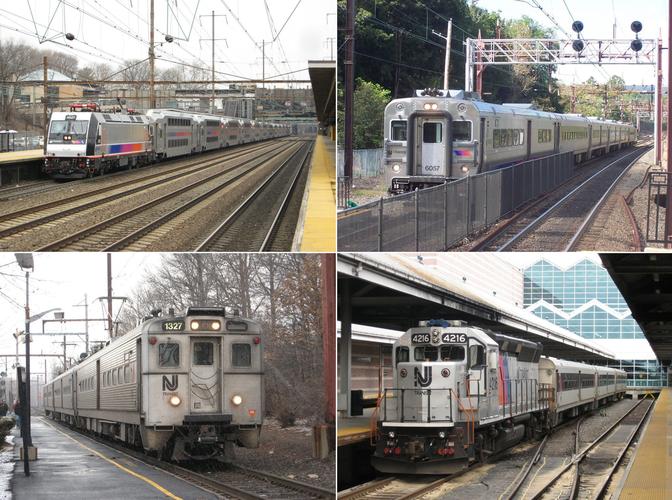 Network and infrastructure
Lines
As of 2012, NJ Transit's commuter rail network consists of 11 lines and 164 stations, primarily concentrated in northern New Jersey, with one line running between Atlantic City and Philadelphia. These lines are listed below.

Freight usage
Although NJ Transit itself does not carry freight, NJTR allows freight service to be operated over its lines via trackage rights agreements with several railroads to operate on its lines for freight service. Conrail, CSX, Norfolk Southern and several short lines (Cape May Seashore Lines, Morristown & Erie Railway, Southern Railroad of New Jersey) currently have trackage rights contracts to operate freight service on NJ Transit lines. The Morristown & Erie Railway can only use NJT trackage to get between its owned trackage; it cannot serve customers on NJ Transit trackage. A similar situation exists for Conrail on the Atlantic City Line.

Below is a list of NJ Transit lines and freight lines that operate on them:

Non-passenger lines
NJTR also owns several lines not used for regular passenger service. These lines were purchased by the New Jersey Department of Transportation in the late 1970s for railbanking purposes, with ownership transferring to NJ Transit upon its creation in 1979. These lines are either leased for freight/tourist service, interim rail trail use, or remain derelict:

Ownership
NJT owns most of its tracks, infrastructure, bridges, tunnels and signals. The exceptions are:

Yards and maintenance
NJ Transit's main storage and maintenance facility is the Meadows Maintenance Complex in Kearny, New Jersey. Other major yard facilities are located at Hoboken Terminal. Amtrak's Sunnyside Yard, in Queens, New York serves as a layover facility for trains to New York Penn Station. Additional yards are located at outlying points along the lines. These include:

NJT has a fleet of maintenance crews and vehicles that repair tracks, spread ballast, deliver supplies and inspect infrastructure. There are eight non-revenue work diesels used for these purposes.

Locomotives
Active revenue
These locomotives carry NJTR reporting marks for revenue service. Not included are the EMU cars, which are technically locomotives, but are listed in the Passenger Cars roster below. ONLY active revenue locomotives are listed, retired equipment is unlisted.

Non-revenue
All non-revenue locomotives are diesel-powered and legally carry the same "NJTR" AAR reporting marks as all other equipment without exception. As these locomotives lack HEP, they do not haul trains in passenger service unless performing a rescue.

​Passenger cars
NJ Transit has a fleet of over 1,000 passenger cars. The fleet and examples are described below. Except for the Comet IIM (which are all trailers), all examples shown are cab cars leading or on the tail end of trains. Car groupings are, except for the Arrow III MUs, arranged in the following order: cab cars, trailers with lavatories, and trailers without lavatories, where applicable. Single Arrow III MU's are GE Model MA-1J, married pairs are GE Model MA-1H.