The Queen and Crescent Limited. 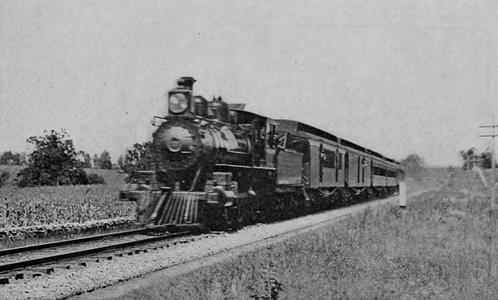 In 1969, as part of an effort to simplify its corporate structure, the Southern Railway's Alabama Great Southern Railroad operating subsidiary merged the NO&NE, ending its existence on paper.

In 1960 NO&NE reported 746 million net ton-miles of revenue freight and 13 million passenger-miles; at the end of that year it operated 203 miles of road and 368 miles of track.

History
The New Orleans and Northeastern Railroad was incorporated in 1868 in Louisiana (under the name of Mandeville and Sulphur Springs Railroad until 1870 and 1871 in Mississippi. No track was built, however, and the company's land lay unused until 1881, when control of the company was acquired by the Alabama, New Orleans, Texas and Pacific Junction Railways Company. Construction on the line began in 1882. The line opened in 1883 and extended 196 miles from New Orleans to Meridian, Mississippi.

In 1916 the Southern Railway acquired the NO&NE, which eventually formed part of the Queen and Crescent Route. From that point on the NO&NE owned or were assigned locomotives and other equipment wore Southern lettering but carried NO&NE sublettering until the line was merged into the Alabama Great Southern in the late-60s, at which time sublettering was changed to AGS. The NO&NE was known for having the longest curve in the Southern Railway system; nine miles along the shores of Lake Ponchartrain.