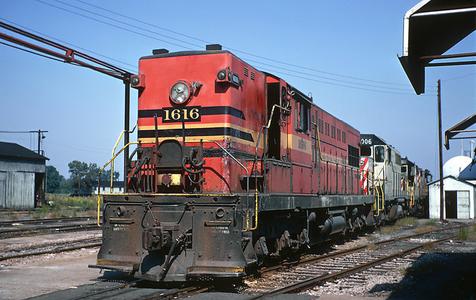 History
The Elizabeth City and Norfolk Railroad was established January 20, 1870, and in 1881 the line opened, running south from Berkley, Virginia, across the Eastern Branch of the Elizabeth River from Norfolk, via Elizabeth City to Edenton, North Carolina. On February 1, 1883, the name was changed to the Norfolk Southern Railroad, reflecting the company's ambitions to build further. It entered receivership for the first time in 1889, and was purchased April 29 and reorganized May 1891 as the Norfolk and Southern Railroad. By that time, it had acquired trackage rights over the Norfolk and Western Railroad over the Elizabeth River into Norfolk. With the reorganization also came the acquisition of the Albemarle and Pantego Railroad in North Carolina from the John L. Roper Lumber Company, extending the line from Mackeys on the other side of the Albemarle Sound from Edenton south to Belhaven on the Pungo River, a branch of the Pamlico River.

Also in 1902, the N&S acquired the Roanoke Railroad and Lumber Company's Washington and Plymouth Railroad, running from Plymouth, North Carolina, south to Washington, built a line from Mackeys to Plymouth, and began a car ferry operation across the Albemarle Sound between Edenton and Mackeys (replaced by a bridge in 1910). The W&P had been built by the lumber company in 1889 to 3 ft narrow gauge , became a common carrier in 1901, and was converted to 4 ft 8 1⁄2 in standard gauge by the N&S in 1904.

Norfolk Southern (the original NS) Baldwin Road Switcher AS-416 1616 at Chesapeake, VA in old paint scheme in October 1968.  Note the 6-wheel trucks, there were only 21 built in the U.S.  Photo by Roger Puta. 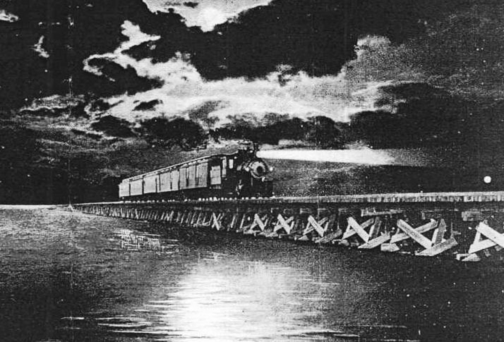 The Raleigh and Eastern North Carolina Railroad was organized in 1903 and renamed the Raleigh and Pamlico Sound Railroad in 1905. In 1906, it built a line from the end of the N&S at Washington south to Bridgeton, as well as a completely separated line from Raleigh east to Zebulon.

Virginia and Carolina Coast Railroad: built 1885 to 1902 from Suffolk, Virginia south to Edenton and from Beckford Junction (on the Suffolk-Edenton section) to Elizabeth City; originally built as the Suffolk and Carolina Railway and renamed in 1906).
Pamlico, Oriental and Western Railway: built 1906 from New Bern (across the Neuse River from Bridgeton) east to Bayboro, including a bridge over the Neuse River that became part of the main line.
Atlantic and North Carolina Railroad (leased September 1, 1904): built 1858 from Goldsboro southeast to Morehead City, intersecting the main line at New Bern.
Beaufort and Western Railroad: built 1905 from Morehead City east to Beaufort.

The company again entered receivership in 1908, and in 1910 reorganized as the Norfolk Southern Railroad. That same year it built a long branch from Chocowinity (also known as Marsden) on the main line south of Washington west to the isolated section to Raleigh at Zebulon (that became the main line to Charlotte via Raleigh, while the old line to New Bern became a branch). Several shorter branches also opened that year - from Bayboro south to Oriental, from Pinetown on the main line east to Bishops Cross on the line to Belhaven, and from Mackeys east to Columbia (as well as a trestle across the Albemarle Sound between Mackeys and Edenton).

The Egypt Railroad was chartered June 14, 1890, and opened October 15, 1891, running a short distance from Colon on the Seaboard Air Line Railroad main line west to Cumnock. It was leased to the Raleigh and Western Railway, another short line continuing west from Cumnock to Harpers Crossroads, on September 6, 1893. The company entered receivership in 1907 and operations west of Cumnock were suspended in 1908. The Egypt Railroad was reorganized April 1, 1910, as the Sanford and Troy Railroad.

In November 1911, the NS formed the Raleigh, Charlotte and Southern Railway (RC&S) as a consolidation of several smaller companies; the RC&S was merged into the NS in fall 1912. The RC&S was made up of the Sanford and Troy Railroad, Durham and Charlotte Railroad, and the following lines:
Raleigh and Southport Railway: Raleigh south to Fayetteville.
Aberdeen and Asheboro Railroad: Aberdeen northwest to Asheboro, with a branch from Biscoe west via Troy to Mount Gilead, and several other short branches.

At the time, only the Raleigh and Southport Railway connected to the other NS lines. In 1914 the NS built a line from Varina on the former R&S southwest to Colon and from Mount Gilead west to Charlotte, giving it a continuous line, using the former S&T, D&C and branch of the A&A from Colon to Mount Gilead.

On May 27, 1920, the NS leased the Durham and South Carolina Railroad, giving it access to Durham. The D&SC ran from Durham south to Bonsal on the Seaboard Air Line Railroad, and was extended to Duncan on the NS around the time the NS leased it.

Another receivership came in 1932, and in 1935 it defaulted on its lease of the Atlantic and North Carolina Railroad, which was reincorporated November 16 of that year. Many branch lines were abandoned or sold during that period, such as the local lines in Suffolk, Virginia, which were sold to the Virginian Railway in 1940. On January 21, 1942, the company was reorganized for the last time as the Norfolk Southern Railway.

Norfolk Southern still owns the main line from Gulf (near Cumnock) northeast to Raleigh. The part from Gulf west to Charlotte (as well as the branch to Aberdeen) is now the Aberdeen, Carolina and Western Railway, the part from Edenton north to Norfolk is now the Chesapeake and Albemarle Railroad, and the Belhaven-Pinetown branch as well as the Plymouth-Raleigh segment is now operated by the Carolina Coastal Railway. The line between Plymouth and Edenton has been removed, with the famous Albemarle Sound Trestle having been demolished in the late 1980s.

Heritage Unit
As a part of the current Norfolk Southern Railway's 30th anniversary in 2012, the company painted 20 new locomotives in predecessor schemes. NS #8114, a GE ES44AC locomotive, was painted in the original Norfolk Southern paint scheme.