New York, Susquehanna and Western Railway
The New York, Susquehanna & Western Railway (reporting mark NYSW) (a.k.a. the Susie-Q or the Susquehanna) is a former Class I, now Class II freight railway operating over 500 miles of track in the northeastern states of New York, Pennsylvania and New Jersey. It was formed in 1881 from the merger of several smaller railroads. Passenger service between Northern New Jersey and New York was offered until 1966. The railroad was purchased by the Delaware Otsego Corporation in 1980, and became a regional player during the 1980s in the intermodal freight transport business.

History
The New York, Susquehanna & Western can trace its roots back to the Hoboken, Ridgefield & Paterson Railroad, chartered in 1866 to connect industrial Paterson, New Jersey, with the ports along the Hudson Waterfront opposite New York City at Hoboken. That same year, the New York and Oswego Midland Railroad was chartered to connect the Great Lakes port at Oswego, New York, with New York City. Several competing companies sprang up in 1867, but the New Jersey Western was the most successful, constructing westward from Paterson and Hawthorne. Cornelious Wortendyke, president of the NJW, signed a lease agreement with Dewitt C. Littlejohn of the NY&OM giving his road a through route into New Jersey. Construction on the NY&OM started in 1868 and progressed rapidly. The NJW changed its name to the New Jersey Midland Railway in 1870, and construction had stretched from Hackensack, New Jersey, all the way through to Hanford.

The NY&OM reached Middletown, New York, and leased the connecting Middletown, Unionville and Water Gap Railroad, which reached the NJM at Hanford. The last stretch of construction from Hackensack to Jersey City completed the NJM in 1872. The first through train from Oswego to Jersey City operated on July 9, 1873. While the goals of the two partners had been reached, the Panic of 1873 caused financial ruin for both companies. The NY&OM suspended lease payments, and the agreement was broken. The NY&OM was reorganized as the New York, Ontario and Western Railway in 1879, and went its separate way. The NJM took over the lease of the MU&WG as well. Unable to weather the financial storm, the NJM was put into receivership in 1875.

In 1880, the railroad was reorganized as the New Jersey Midland Railroad, and attention was turned to the lucrative coal fields of eastern Pennsylvania. By 1882, the newly reorganized New York, Susquehanna & Western had extended west to Gravel Place, Pennsylvania, and a connection with the Delaware, Lackawanna and Western Railway (DL&W). The NYSW also had a connection to the DL&W at Delaware, NJ via the Blairstown Railway. Due to the increased volume of traffic, the railroad was double-tracked from Paterson to Jersey City in 1887. To reach the ports of New York, traffic was handed off to the Pennsylvania Railroad at Marion Junction. To keep more of the line haul revenue for themselves, the Susquehanna extended their line from Little Ferry, New Jersey through the new Palisades Tunnel to a new terminal at Edgewater where they constructed coal docks for transfer from train to boat in 1892. The NYSW also reached west of the Delaware River and leased the Wilkes-Barre and Eastern Railroad to access the Scranton area directly and divert traffic away from the Lackawanna.

American financier J.P. Morgan began to take notice of this rapidly expanding coal-hauler, and quietly bought up its stock on behalf of the Erie Railroad. The railroad was leased by the Erie in 1898, and soon after took over complete operation of the line.

The NYS&W entered bankruptcy in 1937, and was released from Erie control in 1940. It modernized its commuter service with ACF self-propelled "Motorailers" and a connecting bus service to New York City. The railroad completely dieselized its other operations by the end of World War II purchasing ALCO RS-1 and S-2 locomotives. Commuter trains were upgraded again in the early 1950s with RDCs and new streamlined stainless steel coaches from the Budd Company (albeit without air conditioning, one of the few Budd coach orders to have windows that open). 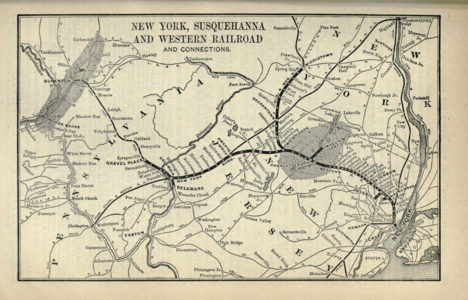 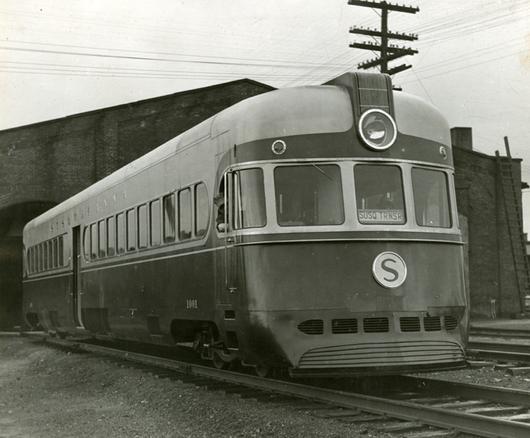 The NYS&W fell on hard times during the economic recession of 1957. The NYS&W lost its western connection to the Lehigh and New England Railroad when the L&NE ceased operations in 1961, resulting in the NYS&W pulling up all its track west of Sparta Jct. (which now comprises what is now known as the Paulinskill Valley Trail). Thereafter, the NYS&W sold off its nearly new Budd passenger cars and replaced them with second-hand used equipment. Desperate to close its money-losing commuter service, the railroad's trustees offered its commuters $1,000 each to stop using the trains. Permission to end commuter service was granted in 1966. Washouts caused by Tropical Storm Doria (1971) cut off other connections, and the railroad retreated to Butler, New Jersey.

Delaware Otsego Corporation
The NYS&W declared bankruptcy in 1976 after failing to pay New Jersey state taxes, though managed to stay out of Conrail, which had surrounded it. The bankruptcy court ordered that the railroad be abandoned and its assets sold. By then, the NYS&W was down to a 43-mile line from Croxton and Edgewater through Paterson to Butler. The State of New Jersey, aware of Delaware Otsego Corporation's reputation at rehabilitating short lines, asked them to take over the railroad.

Delaware Otsego was founded in 1966 to operate a small section of the former New York Central Railroad Catskill Mountain Branch outside Oneonta, New York. This was the first of many cast-off short line acquisitions. Between 1971 and 1986, D.O. acquired several other branches and short lines, including the Cooperstown Branch of the Delaware & Hudson Railway in 1971; the Richfield Springs Branch of the Erie Lackawanna Railway (EL) in 1973, the Fonda, Johnstown and Gloversville Railroad in 1974, and the EL Honesdale Branch in 1976.

A new D.O. subsidiary, the New York, Susquehanna & Western Railway, began operation in September 1980 under a lease agreement. In 1982, DO purchased the NYS&W. In 1981, Conrail proposed abandonment of the former EL line between Binghamton and Jamesville, New York, just south of Syracuse, and the Utica branch of that line. D.O. purchased the lines and organized them as the Northern Division of the NYS&W. To connect the two divisions, D.O. also purchased a portion of the former Lehigh and Hudson River Railway between Warwick, New York and Franklin, New Jersey from Conrail and secured trackage rights on Conrail from Binghamton to Warwick and from Franklin to Sparta Junction.

D.O.'s management early recognized the potential in coast-to-coast container traffic. Sea-Land Service leased property adjacent to NYS&W's yard at Little Ferry, New Jersey, and contracted with the railroad to operate intermodal container trains. Almost all their mileage west to Binghamton was on Conrail track by virtue of the trackage and hauling rights agreements. After a few years, Conrail, which operated container trains of its own, wanted to raise the rates it charged NYS&W for moving trains. The process required renegotiating trackage rights and haulage agreements; as a result, NYS&W reopened its line west of Butler and got more favorable operating arrangements on Conrail track.

1990 saw the NYS&W end service on its Edgewater Branch, a 1.5-mile long line connecting its former Hudson River terminal with the mainline in Fairview at Undercliff Junction. As of 2008, the tunnel carries a pipeline owned by the Amarada Hess Corporation.

In 1994, Onondaga County, New York purchased the former Delaware, Lackawanna and Western Railroad (DL&W) line into Syracuse, with the provision that the NYS&W operate RDC service in Syracuse between Syracuse University, Armory Square, and the Carousel Mall with the option for further routes, leading to the creation of OnTrack. With operations on this segment, the Syracuse branch was rehabilitated and the Conrail interchange relocated. Regular steam excursions were offered and RDCs refurbished for OnTrack use. Intermodal trains rolled beyond Binghamton to Syracuse for interchange with Conrail. After a few years, regular excursions were halted.

With the impending break-up of the Conrail system to Norfolk Southern Railway and CSX Transportation, the NYS&W was a ripe target for acquisition, as it could potentially siphon lucrative traffic away from either road. On October 3, 1997, DOCP Acquisition LLC announced it had completed the short-form merger of Delaware Otsego Corporation (NASDAQ:DOCP) with a wholly owned subsidiary via a stock tender offer of $22 per share.

This deal essentially brought the D.O. System of Railroads, including the subsidiary New York, Susquehanna & Western Railway (NYS&W), under control of the much larger Norfolk Southern and CSX rail systems, because the new owner DOCP Acquisition LLC is owned 40% by Norfolk Southern, 40% by CSX and 20% by Walter G. Rich of the Delaware Otsego Corporation.

In 2005, the NYS&W leased the former Erie Main Line from Port Jervis to Binghamton from Norfolk Southern. Leased and operated under the name Central New York Railroad (CNYK). The CNYK is a "paper" railroad and all train operations and line maintenance is performed by Susquehanna personnel, while Norfolk Southern Railway retains overhead trackage rights. Currently there are only 6 trains a week operated by the NYS&W on the line, one in each direction, three times a week. At this time there is no traffic from the Norfolk Southern. The newly reactivated Stourbridge Railroad (SBRR) depends on the NYS&W for interchange at Lackawaxen, New York.

On August 9, 2007, D.O. founder Walter Rich died of pancreatic cancer. After President Rich's death, the new President Nathan Fenno, almost immediately cancelled all passenger operations and excursions and the fleet used on them was sold off. Many older diesel locomotives were sidelined, retired, and sold during this time as well.

In July 2011, NYS&W took possession of five leased CEFX locomotives, to ease the railroad's continually worsening power shortage. These five locomotives were used as a supplement to its current EMD 645 fleet in road train service, and occasionally local duty. It was not uncommon to see road train line-ups consisting of entirely leased power.

Passenger service restoration:
The Bergen-Passaic Rail Line was a New Jersey Transit initiative in the mid-2000s studying restoration of passenger service on a segment of NYS&W trackage between Sparta and Hackensack, New Jersey to alleviate traffic congestion on Route 23. The project hit a snag when a suitable location for a NJ Transit rail storage yard in or near Sparta could not be agreed upon.

New FRA-compliant diesel multiple unit rail cars will be used. The project has been promoted via social networking blogs and Facebook, resulting in Kinnelon officials publicly voicing support for the project.