During the ill-fated "Morganization" of the New York, New Haven and Hartford Railroad (NH), the railroad acquired control of the O&W and installed NH president Charles Sanger Mellen as president for a year. Regulatory difficulties frustrated Mellen's plans to barter the O&W to the New York Central Railroad for concessions elsewhere.

Improved highways ended the O&W's passenger service to the resort areas of the lower Catskill Mountains (the "Borscht Belt") and lightly populated portions of upstate New York, with the last train from Walton, New York to Weehawken operating during the summer of 1948. The last passenger train (from Roscoe, New York to Weehawken Terminal) operated on September 10, 1953.

The O&W began bankruptcy proceedings as early as 1937 (which it ultimately would never emerge from), and, apart from total dieselization by the early 1950s, it became antiquated (it was known to locals as the "Old & Weary", "Old & Wobbly" or "Old Woman"). The decrease of coal as a heating fuel for other than major power plants damaged its primary freight business, as did the end of rail transport of high-priority dairy products from upstate New York to the Metro New York City area. The NH offered to purchase the company in 1952, but later withdrew its offer, citing its own financial problems. Abandonment was loudly protested by towns along the line, which considered unpaid back taxes as an investment in the railroad. The New York state legislature approved a $1 million aid bill, citing the O&W as essential for civil defense, but the state civil defense commission rejected it.

The federal government eventually recommended complete liquidation, which occurred on March 29, 1957. All O&W assets were auctioned — the diesel locomotives found new owners, but all else was scrapped.

Legacy
By virtue of its superb online scenery and anachronistic operations, the O&W retains "cult status" among railroad and history buffs more than 50 years after its abandonment, with periodic bus tours of remaining railroad artifacts. New York State Route 17 parallels the O&W from south of Liberty to Hancock in Sullivan and Delaware Counties.

Rail historian George Drury later commented that the O&W "had always been sickly and should not have been built" at just "541 miles".

The "Flying Diesel Corps"
On September 27, 1955, a 50-car O&W train in Hamilton, New York traveling on a mainline approached a switch set for a siding which led to a coal trestle. Although the engineer fully applied the brakes, the train continued up the siding at more than 30 miles per hour and through the trestle. It was learned that the 213-ton EMD FT diesel locomotive at the head of the train "flew" a distance of 150 feet beyond the coal trestle from an elevation of 15 feet; total time of "flight" was later estimated to be between six and seven seconds. Two of the crew were seriously injured, but no crewmen were killed in the wreck.

An investigation by New York state police as to why the switch had been thrown resulted in no arrests. A dinner was later given in honor of the crew who each received a plaque proclaiming them to be members of the O&W's new "Flying Diesel Corps." Each plaque was topped with a cast presentation model of their F-unit locomotive; the castings were provided by EMD.

One of the freight cars involved in the accident was loaded with chocolate bars from the Nestlé plant in nearby Fulton, New York. It was said that when the younger residents of Hamilton learned of the spilled candy, they raced to collect what they could, and that as a result candy sales in the town were for some time afterward very low. 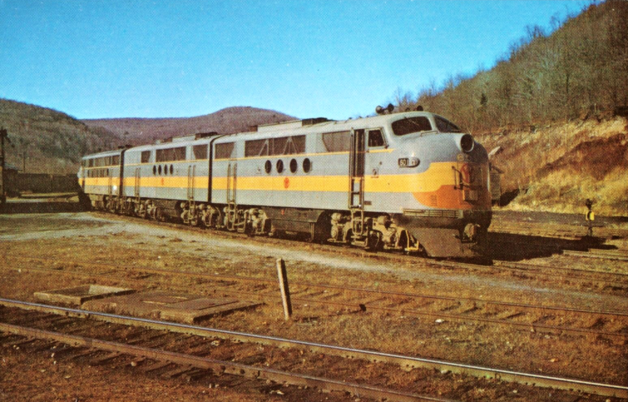 New York, Ontario and Western Railway
The New York, Ontario and Western Railway, more commonly known as the O&W or NYO&W, was a 541 mile former Class I regional railroad with origins in 1868, lasting until March 29, 1957, when it was ordered liquidated by a US bankruptcy judge. The O&W holds the distinction of being the first notable U.S. railroad to be abandoned in its entirety. The railroad operated in North Jersey, Upstate New York and Northeastern Pennsylvania, and was headquartered in New York, New York.

History
In 1880, the O&W inherited the Oswego-New York corridor as well as the branches to Ellenville, Delhi and New Berlin, New York from the New York & Oswego Midland, which had constructed the lines. The O&W improved the line by providing a new route to the New York City area from Middletown, NY which extended to Cornwall on the Hudson River and then to Weehawken Terminal. This development was made possible by negotiating rights of way from the New York, West Shore & Buffalo Railway, later part of the New York Central system.

In 1886, the O&W acquired the operations of both the Utica, Clinton & Binghamton and the Rome & Clinton railroads from the Delaware & Hudson Canal Company. By acquisition of these assets and construction of a new line to Sylvan Beach on the east shore of Lake Oneida, the O&W extended its operations into new market areas, and the Sylvan Beach Loop became a seasonally-significant corridor by providing transportation to central New York's recreational resort area. By 1889, the O&W added two new branches, New Berlin to Edmeston, and Port Jervis to Monticello, connecting to the main line at Summitville, New York.

The most significant addition occurred in 1890, when the O&W constructed a 54-mile branch from Cadosia, New York to Scranton, Pennsylvania, through the rich anthracite coal reserves in Pennsylvania's Lackawanna Valley. Revenues from this Scranton division strengthened O&W's revenues and provided the means for future improvements to the railroad. The railroad's W-in-O logo first appeared in 1892.