The Pittsburgh and Lake Erie Railroad
The Pittsburgh and Lake Erie Railroad (P&LE) (reporting mark PLE), nicknamed the "Little Giant", began in May of 1875. Company offices were headquartered in Pittsburgh, PA. The line connected Pittsburgh with Youngstown, OH at nearby Haselton, OH in the west and Connellsville, Pennsylvania to the east. It did not reach Lake Erie (at Ashtabula, OH) until 1976 when Conrail was created. The P&LE was described as the "Little Giant" due to the density of traffic over its moderate mileage. It was a specialized railroad deriving much of its revenue from coal, coke, iron ore, limestone, and steel.

The eventual closure of the steel mills led to the end of the P&LE as an independent line in 1992. In 1950, the P&LE operated 221 miles of line, and the New York Central System owned over 50% of its capital stock. Also at this time, the P&LE operated four daily round trip passenger trains to Cleveland, three to Buffalo, and a few other locals. By the end of 1970 the P&LE operated 211 miles of road on 784 miles of track, not including PC&Y and Y&S; in 1970 it reported 1,419 million ton-miles of revenue freight, down from 2,437 million in 1944.

Pittsburgh and Lake Erie Railroad No. 5930 at Pittsburgh, PA. 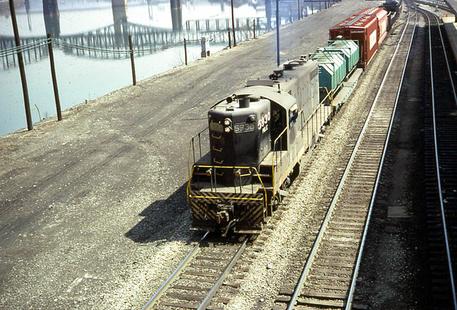 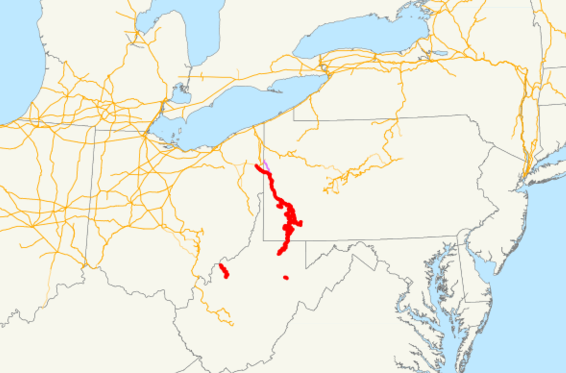 The P&LE bought several smaller lines that operated in the areas of its main line that extended the line north to Youngstown and south to Connellsvile . This provided transportation from the steel centers of Pittsburgh to the Great Lakes and the St. Lawrence Seaway area. The Pittsburgh and Lake Erie Railroad was the work of William McCreery, a well known Pittsburgh businessman and railroad builder, and had taken a beating from the Pennsylvania Railroad in a business that had a loss or failed. The PRR at that time had used discriminatory rates, which became a hot issue in Pittsburgh. In May of 1870 McCreery and a group of ten other people filed Articles of Association with Pennsylvania Secretary of State. The stated length of the railroad was for 57 miles. After two years, this group had trouble raising the needed funds and in 1877, many of the directors were replaced by a new group of Pittsburgh businessmen. The new group consisted of influential men like James I Bennett, David Hostetter, James M. Baily, Mark W. Watson, and James M. Schoonmaker. Rails were first laid down in the Spring of 1877 at Beaver Falls, which other than Pittsburgh had the largest population. Also, around February of 1877 Jacob Henrici of the Harmony Society had business there.

In July of 1877, McCreery resigned and Bennett was elected to president with Jacob Henrici becoming a director. Henrici had ties with the  Harmony Society, which was a communal religious group that had been founded in 1805. In 1880, William Henry Vanderbilt's Lake Shore and Michigan Southern Railway bought $200,000 worth of stock in the P&LE. The P&LE remained in the Vanderbilt system until Conrail. Also in 1877, the P&LE and the Atlantic & Great Western (Erie) and the Lake Shore and Michigan Southern Railway agreed to route traffic at Youngstown, OH. The final track was laid between Pittsburgh and Youngstown on January 27, 1879. When it began in 1879, the P&LE was a poorly-constructed single track line. However, the railroad was an immediate success and money was soon made available for improvements.

In 1881, the P&LE had ties with the South Pennsylvania Railroad (South Penn). This led William Henry Vanderbilt controlling the P&LE as a link in the South Penn and the construction of the Pittsburgh, McKeesport and Youghiogheny Railroad. Vanderbilt bought Henry W. Oliver's and the Harmony Society's stock in the P&LE. Then with Andrew Carnegie’s aid, advanced the PM&Y the necessary finances to build to Connellsville, PA and lease it to the P&LE for 99 years. The PM&Y was the only part of the South Penn to be constructed, but it remained an important part of the P&LE. The PM&Y opened in 1883 and leased to the P&LE in 1884. The New York Central Railroad took formal control of the P&LE in 1887.

The Lake Shore and Michigan Southern Railway's president, John Newell, became president of the P&LE in 1887. Under Newell, Reed and Colonel Schoonmaker; the P&LE became the "Little Giant". From 1887 to 1927, the P&LE was transformed into a heavy duty railroad, with double track from Pittsburgh to Youngstown. The P&LE was also operated as an independent subsidiary, even after the NYC and PRR merged to form the Penn Central. The P&LE extended up the Monongahela River to Brownsville, PA in 1901. The PRR at the same time had also extended to Brownsville. Both the PRR and the P&LE had plans to extend even further up the river into West Virginia. The Monongahela Railway then was extended south to Martin, PA, and later in 1915 it reached Fairmont, WV.

When Conrail formed, the Pittsburgh and Lake Erie Railroad again became an independent railroad due to the fact that Penn Central owed $15.2 million to the P&LE, and operated as such until it merged into CSX. Beginning in 1934, the B&O bought trackage rights over the P&LE from McKeesport to New Castle. The B&O's route through Pittsburgh had more grades and curves. In the last years of the P&LE, CSX used the line more than P&LE leading to the merger. Many of the route’s customers no longer existed, with only the main line still intact. In 1992 the company was taken over by CSX Transportation. The CSX designated the P&LE as a new subsidiary, the Three Rivers Railway. However, in 1993, CSX leased the TRR, and there now no distinction between the P&LE and any other portion of CSX's system.