Pere Marquette Railway
The Pere Marquette Railway (reporting mark PM) operated in the Great Lakes region of the United States and Canada from 1900 until 1947. It had trackage in the states of Michigan, Ohio, Indiana, Illinois, and the Canadian province of Ontario. Its primary connections included Buffalo; Toledo; and Chicago. The company was named after Père (French for Father) Jacques Marquette S.J. (1637–1675), a French Jesuit missionary who founded Michigan's first European settlement, Sault Ste Marie. Its headquarters were in Cleveland, Ohio.

History
The Pere Marquette Railroad was incorporated on November 1, 1899 in anticipation of a merger of three Michigan-based railroad companies that had been agreed upon by all parties. It began operations on January 1, 1900, absorbing the following companies:

The company was reincorporated on March 12, 1917 as the Pere Marquette Railway. In the 1920s the Pere Marquette came under the control of Cleveland financiers Oris and Mantis Van Sweringen. These brothers also controlled the New York, Chicago & St. Louis Railroad (Nickel Plate), the Erie Railroad and the Chesapeake & Ohio Railway, and planned to merge the four companies. However, the ICC did not approve the merger and the Van Sweringens eventually sold their interest in the Pere Marquette to the C&O, with which it formally merged on June 6, 1947. The C&O has since become part of CSX Transportation.

In 1984, Amtrak named its passenger train between Grand Rapids, Michigan and Chicago the Pere Marquette.

The 2004 film The Polar Express featured steam locomotive Pere Marquette 1225. The train in the movie (not the same train in the popular children's book) was a model of #1225 based on measurements and recordings of the 1225. It is the locomotive that Chris Van Allsberg said was the inspiration for the book, having seen it as a child when it was on the Michigan State University campus. The locomotive was scheduled to be at the premiere in Grand Rapids, where the writer was born, but was canceled because of interferences with the schedule of CSX. It is now housed and maintained at the Steam Railroading Institute in Owosso, Michigan.

1907 Wreck
On July 20, 1907 an excursion train carrying 800 passengers from Ionia to Detroit collided near Salem with a freight train, sadly killing 31 and injuring 101. The accident apparently happened because of a hand-written schedule on unlined paper whose columns did not line up, and was misread by the freight crew. The Interstate Commerce Commission investigation also cited safety violations, including use of pine instead of oak for car walls and the omission of steel plates required for mail cars. This was Michigan's worst rail disaster.

Ludington Division — Saginaw to Ludington, Michigan (Partially now part of the Pere Marquette Rail-Trail, between Baldwin and Ludington in use with Marquette Rail, and Saginaw to Midland used by Saginaw Bay Southern, with the rest of the line removed in 1991; the ferry closed in 1990)

Detroit Division — Detroit, Michigan to Grand Rapids, Michigan (In use by CSX)

Chicago Division — Grand Rapids, Michigan to Porter, Indiana and (via trackage rights over various lines) Chicago, Illinois (In use by CSX)

La Crosse Branch — New Buffalo, Michigan to La Crosse, Indiana (Abandoned north of Wellsboro, Indiana by C&O in 1989, most tracks removed; Wellsboro to La Crosse in use by the Chesapeake and Indiana Railroad)

Petoskey Division — Grand Rapids, Michigan to Bay View, Michigan (In use by Marquette Rail between Grand Rapids and Manistee and by the Great Lakes Central Railroad between Grawn and Williamsburg, with the rest abandoned in 1982)

Canadian Division — Lines in Canada, including Windsor, Ontario and Sarnia, Ontario via Blenheim, Ontario to St. Thomas, Ontario and (via trackage rights) St Thomas east to Buffalo, New York (In use with Canadian Pacific)

Saginaw Subdivisions — Saginaw, Michigan to Port Huron, Michigan via two routes and to Bay City, Michigan (Mostly abandoned between 1951 and 1988, some sections in use with the Huron and Eastern Railway)

Car Ferries
The Pere Marquette operated a number of rail car ferries on the Detroit and St. Clair Rivers and on Lake Erie and Lake Michigan. The PM's fleet of car ferries, which operated on Lake Michigan from Ludington, Michigan to Milwaukee, Kewaunee, and Manitowoc, Wisconsin (see SS Badger), were an important transportation link avoiding the terminal and interchange delays around the southern tip of Lake Michigan and through Chicago.

Pere Marquette 18 Tradgedy
On September 10, 1910, Pere Marquette 18 was bound for Milwaukee, Wisconsin, from Ludington, Michigan, with a load of 29 railroad freight cars and 62 persons. Near midnight, the vessel began to take on massive amounts of water. The captain dumped nine railroad cars into Lake Michigan, but this was no use—the ship was going down. The Pere Marquette 17, traveling nearby, picked up the distress call and sped to assist the foundering vessel. Soon after it arrived and it could come alongside, the Pere Marquette 18 sank with the loss of 28 lives; there were 33 survivors. 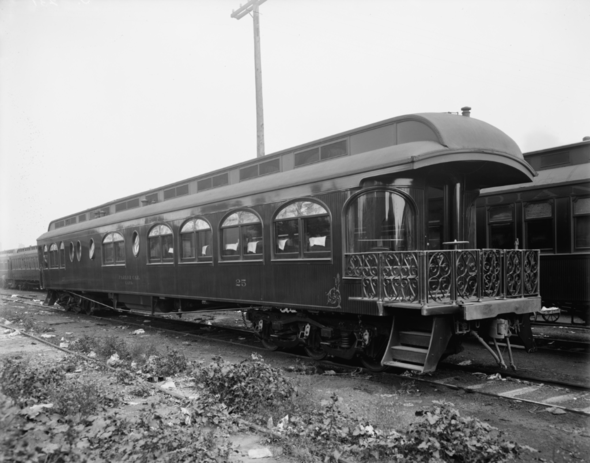