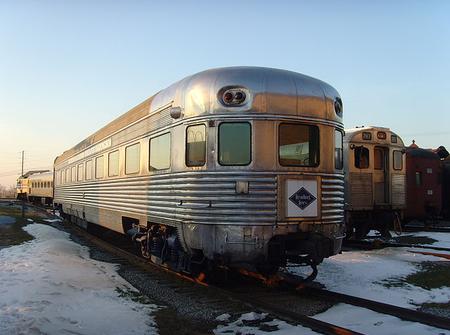 Commuter lines
In the 1920s, the Reading operated a dense network of commuter lines branching off of the Ninth Street Branch mostly powered by small 4-4-0s, 4-4-2s and 4-6-0 camelbacks.

Bankruptcy protection
The Reading Company was forced to file for bankruptcy protection in 1971. The bankruptcy was a result of dwindling coal shipping revenues, freight being diverted to highways by trucking companies, and strict government regulations that denied railroads the ability to set prices, required fair taxes, and forced the railroads to continue to operate money-losing lines as a common carrier.

Electrification
The railroad also had an extensive commuter operation centered around Philadelphia, the hub of which was Reading Terminal. The following suburban lines were electrified before the onset of the Great Depression:
Norristown Line
Chestnut Hill
Lansdale/Doylestown
Hatboro (extended to Warminster in 1974)
West Trenton

The notable exception was the Fox Chase/Newtown branch. With the aid of public funding from the city of Philadelphia, the line was electrified as far as Fox Chase (the last station within city limits) in September 1966. Electrification was to be completed through to Newtown in the 1970s, but government subsidies were not readily available, leaving the Fox Chase-Newtown section as the lone non-electrified suburban commuter route on the Reading system. Passenger service was terminated on January 14, 1983 under the auspices of SEPTA.

Post-railroad: 1976-present
On April 1, 1976, the Reading Company sold its current railroad interests to the newly formed Consolidated Railroad Corporation (Conrail), leaving it with 650 real estate assets, some coal properties, and 52 abandoned rights-of-way. As of 1999, most former Reading lines are now part of Norfolk Southern Railway (NS), as a result of the Conrail split between NS and CSX Transportation. It had sold 350 of the real estate tracts by the time it left bankruptcy in 1980.

In the late 1980s Los Angeles attorney  James Cotter gained control of the corporation through his holding company, the Craig Corporation, and liquidated the rest of its assets to finance his cinema chains in Puerto Rico, Australia and New Zealand. The company sold one of its last railroad-related assets, the Reading Terminal Headhouse, in 1991. In 1996, Cotter reorganized the company as Reading Entertainment. The Craig Corporation merged in 2001 with Citadel Holding Corporation, another Cotter company, and became Reading International, Inc. RDI still owns 317 acres of former railroad property, mostly in upper Pennsylvania, along with the Reading Railroad publicity files.

Most of Reading Entertainment's operations are in Australia, New Zealand, and United States under the Reading Cinemas trade name. Its logo depicts a railroad transforming into a filmstrip to tell the story of the history of the brand.

Los Angeles-based Pacific Theaters decided to sell 15 of the 29 theaters operated by Pacific Theatres Exhibition Corp. and its affiliates, comprising 181 screens in Hawaii and throughout California, outside of Los Angeles, as Pacific wanted to become an exclusive entertainment company primarily in Los Angeles. Reading International had interest in purchasing these theaters in late 2007, finally coming to an agreement in finalizing the purchase February 22, 2008. These theaters reportedly generate around $80 million in revenue annually. Nine of the theaters, comprising 98 screens, are located in Hawaii and operate under the Consolidated Theaters brand name and represented nearly 70% of the Hawaiian box office receipts reported in 2007. Six theaters, comprising 83 screens, in San Diego, Bakersfield, and Rohnert Park California, operated as Pacific Theaters have been converted to the Reading Cinema brand name. Reading's purchase was financed principally by a combination of debt financing from GE Capital Corporation and seller financing. During 2009 and 2010, much of the seller financing was forgiven as part of contingent purchase price adjustment terms and tests in the original purchase agreement.

In October 2008, Reading Entertainment and Screenvision entered into a long-term contract to provide digital, satellite-based pre-show to all Reading Cinemas locations in the United States. Replacing traditional slide show presentation, the digital pre-show by Screenvision would cover advertisements from television shows such as: E! Entertainment, ABC Family. and MTV, upcoming films, and business advertisements such as: Verizon Wireless, Dodge, and National Guard, depending on the movie's MPAA rating. The digital pre-show would also cover local businesses who purchase time on the pre-show. All Reading Cinemas locations in the United States officially began the digital pre-show  in December of 2008.

Reading Cinemas began installing digital projection in 4 of its theaters in the United States using DLP projection technology. These projectors are also capable of showing Digital 3-D presentations. Per Reading's 2009 10-K filing: By mid-year (2010), it anticipates Reading will have 3D projectors in not less than 28 out of the 53 cinema locations that it either wholly owns or consolidates.

Heritage Unit
As a part of Norfolk Southern's 30th anniversary in 2012, the company painted 20 new locomotives into predecessor schemes. NS No. 1067, an EMD SD70ACe locomotive, was painted into the Reading RR scheme with the Bee Line Service on it.

A Reading Railroad map circa 1926.

A Reading Railroad observation lounge car at the Railroad Museum of Pennsylvania at Strasburg, PA. 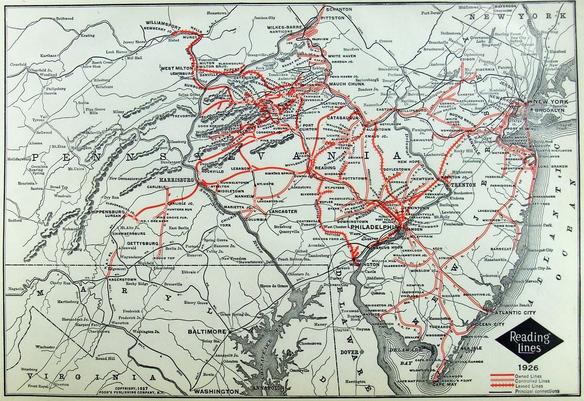