Between 1871 and 1896 the Rutland Railroad was leased to the Central Vermont, regaining its independence when that road entered receivership. The New York Central Railroad briefly had a controlling interest in the Rutland from 1904, but sold half of its shares to the New York, New Haven & Hartford Railroad in 1911.

In 1901, the Rutland Railroad completed construction of a system of causeways and trestles across Lake Champlain, through the Champlain islands, to connect between Burlington, Vermont and Rouses Point, New York. The purpose of this construction was to give the Rutland access to Canada independent of the tracks of the competing Central Vermont. At the final approach to Rouses Point, though, both companies did end up sharing the same bridge over the Richelieu River by using an unusual gauntlet track that allowed sharing without the need for switches. The causeway between Burlington and South Hero built at that time is today maintained as a recreation trail called The Island Line. The company also had a line from Rutland, southeast to Bellows Falls, in southeastern Vermont, opposite New Hampshire, and a line from Rutland south to North Bennington, thence to Chatham, New York. Chatham was a major junction for connections via the New York Central to New York City and the Boston & Albany Railroad service to Massachusetts.

The Rutland's primary freight traffic was derived from dairy products and the railroad is fondly remembered for the long trains of milk that used to move over the system. At its peak the Rutland served about a 400-mile system that roughly resembled an upside-down "L" running from Chatham, New York north to Alburgh, Vermont (the railroad's northernmost terminus was Noyan, Quebec) and thence west to Ogdensburg, New York along the St. Lawrence River. Never a solid financial operation, the Rutland entered receivership for the first time in 1938. Cost cutting, including wage reduction, brought things around. A reorganization in 1950 changed the name from Rutland Railroad to Rutland Railway.

After World War II the decline continued; many branches were closed down. In 1950 the company was reorganized as the Rutland Railway. The year 1953 brought three weeks of employee strike action, which killed off the remaining passenger service on the line.

In 1961 after further strikes the railroad apparently decided it was no longer viable and applied to the Interstate Commerce Commission for complete abandonment. This was approved, and the railroad closed down on May 20, 1963. The strike was brought on by the employees' unwillingness to accept changes that would have moved the center of operations from Rutland to Burlington, requiring them to relocate from Rutland to Burlington.

The changes would have lengthened the runs, running from Burlington to Bellows Falls or Ogdensburg on one day, staying over and then running back the next day. Under current operating orders they would make the run from Rutland to Burlington or Bellows Falls and back in a day, or from Malone, New York running out and back to Ogdensburg and Burlington.

A few years later the national unions agreed to nationwide job changes that allowed this type of change.

Much of the right-of-way was purchased by the State of Vermont. The Northern Division across the top of New York State from Ogdensburg to Norwood remains in tracks. Interestingly, it is operated by Vermont Railway, so all the remaining trackage of the Rutland is operated by one company. Ownership of the railbed from Norwood to Burlington has been dispersed, but a 21-mile section from Norwood to Moira is the multi-use Rutland Trail.

Steamtown
Until it was relocated to Scranton, Pennsylvania, The Steamtown Foundation, located near the Bellows Falls terminus operated tourist trains between the museum site and Chester, Vermont. 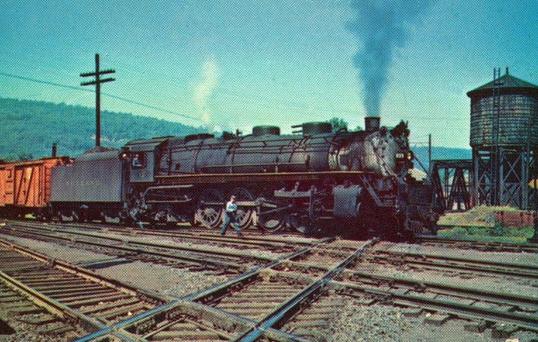