San Antonio, Uvalde and Gulf Railroad
The San Antonio, Uvalde and Gulf Railroad (SAU&G) was a South Texas railroad company in the first half of the 20th century that linked San Antonio with Corpus Christi, Texas. Chartered in 1909 as the Crystal City and Uvalde Railroad, it was renamed in 1912. Because of its unusual abbreviation, the SAU&G, the railroad was for years thereafter popularly called "The Sausage".

Origin
From 1909 to 1911, Crystal City and Uvalde laid 120 miles of track between Uvalde, a city southwest of San Antonio, and Carrizo Springs, the county seat of Dimmit County, and also from Crystal City in Zavala County, a spinach-growing area, to rural Fowlerton near Cotulla in La Salle County. With capital of $230,000, the SAU&G proved convenient for the shipping needs of area farmers and ranchers.

In 1912, the SAU&G completed a 78-mile link from San Antonio to Fowlerton through Pleasanton in Atascosa County, where the company headquarters was moved in 1913 from the previous location in Crystal City. The 117 miles between Pleasanton and Corpus Christi opened at intervals during 1913 and 1914, but the company went into receivership on August 14, 1914.

History
In 1916, the SAU&G owned 18 locomotives and 184 cars and earned in excess of $680,000 annually. During World War I, the SAU&G, like all railroads, was operated through the United States Railroad Administration in Washington, D.C. On December 1, 1925, the New Orleans, Texas and Mexico Railway Company purchased the SAU&G for the Missouri Pacific Railroad as one of its Gulf Coast Lines, and the receivership ended thirty days later. The San Antonio, Uvalde, and Gulf continued to be operated separately. The two-story depot in Pleasanton, with company headquarters on the top floor, closed in 1926, was later moved, and finally torn down. An earlier depot in Pleasanton survives at the Longhorn Museum there.

Along with other Missouri Pacific properties, the SAU&G again entered into receivership in 1933 and remained so until 1956, when the company was merged into the Missouri Pacific system. In 1934, the SAU&G abandoned twenty-six miles of track between Fowlerton and Gardendale, now a largely ghost town in northern La Salle County. In 1959, freight earnings on the former SAU&G under the Missouri Pacific reached nearly $3.5 million, but there was little passenger revenue, as had become common with many railroads by that time.

Later years
On October 15, 1990, the Crystal City Railroad, a name similar to the 1909-1912 company, began operating between Gardendale, Crystal City, and Carrizo Springs, a distance of fifty-five miles, but it went out of business in 1992. At its peak in 1920, the SAU&G had 340 miles of total track but was not earning a profit, according to the Texas Railroad Commission annual report of that year. 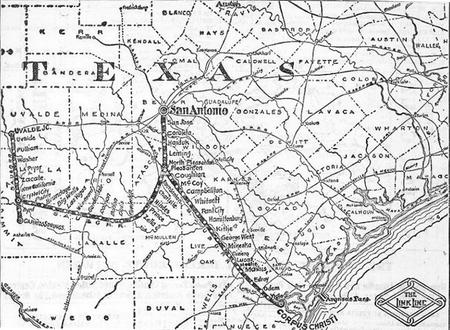