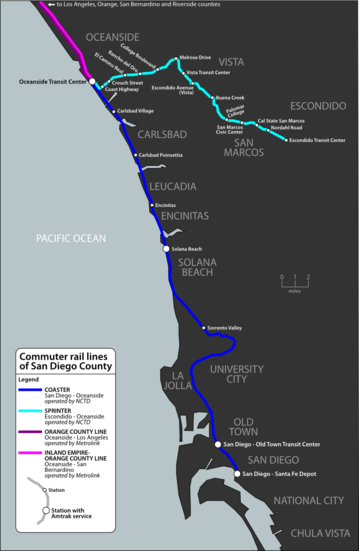 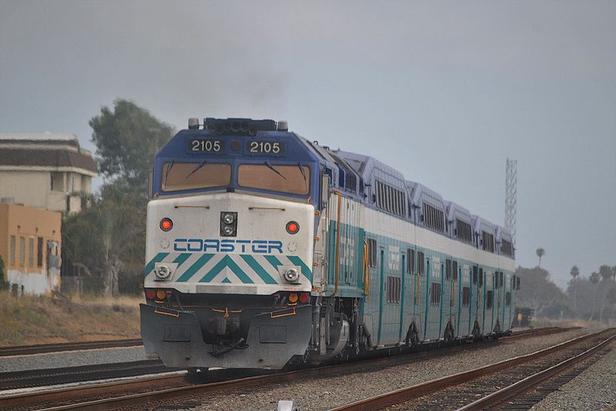 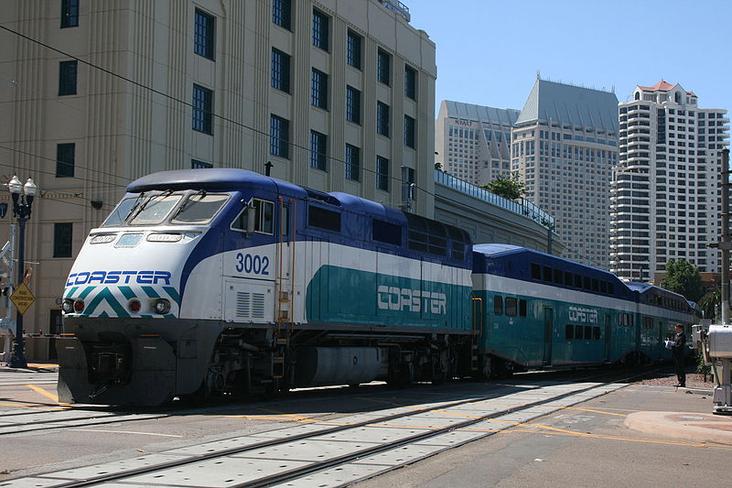 The COASTER at Oceanside.

COASTER
The Coaster (stylized as COASTER) (reporting mark SDNX) is a commuter rail service that operates in the central and northern coastal regions of San Diego County, California, United States. The service is operated by Bombardier Transportation on contract with North County Transit District (NCTD). The service has eight stops and operates primarily during weekday peak periods, with additional weekend and holiday service.

History
San Diego Northern Railway (SDNR) purchased the tracks used by COASTER from the Atchison, Topeka and Santa Fe Railway in 1994. NCTD created the subsidiary San Diego Northern Railway Corporation in 1994 and dissolved it in 2002. Revenue COASTER service began February 27, 1995. Funding for right-of-way acquisition and construction costs came from TransNet, a 1987 measure that imposed a 0.5% sales tax on San Diego County residents for transportation projects. NCTD originally contracted Amtrak to provide personnel for Coaster trains. In July 2006, TransitAmerica Services took over the day-to-day operation of the commuter train, based on a five-year, $45 million contract with NCTD. In 2016, Bombardier Transportationreplaced TransitAmerica as COASTER's operator.

Current service
NCTD owns 62 mi (100 km) of mainline track, including the 41.1 mi (66.1 km) on which the COASTER travels. Traveling the entire COASTER route takes about an hour.

Consumption of alcoholic beverages is no longer allowed on board COASTER trains or NCTD property as of February 1, 2015.

Schedule
More than 20 COASTER trains run on weekdays,[8] with additional service on the weekends. As of the April 3, 2017 schedule, COASTER also added Friday Night service with trains running until a quarter after midnight.

Station stops
The following are the stations served by the COASTER rail line:

The COASTER also connects with the Metrolink rail system at Oceanside, providing connecting service to Orange, Los Angeles, Riverside and San Bernardino counties. It connects to the San Diego Trolley (Green Line) and MTS buses at the Old Town Transit Center; it also connects to the San Diego Trolley (all lines) and MTS buses in the vicinity of the Santa Fe Depot in downtown San Diego – including to the MTS Route 992 bus which offers direct service to Lindbergh Field from Downtown San Diego. Finally, the COASTER connects with BREEZE buses at all North San Diego County station stops.

Fares and ticketing
The cost of COASTER tickets is based upon the number of zones traveled (see map). Fare collection is based on a proof-of-payment system: tickets must be purchased before boarding and are checked by roving fare inspectors. Monthly passes are available. All tickets and passes include transfer agreements with NCTD BREEZE buses and monthly passes include transfer with the Metropolitan Transit System (MTS) buses and Trolleys. On January 20, 2011, the NCTD implemented a fare reduction – the fare reduction led to increased ridership on the COASTER and so was made a permanent fare reduction in September 2011. As of January 2012, regular one-way fares are as follows:

With proof of eligibility, senior citizens (ages 60 and over), people with disabilities, and Medicare cardholders receive a 50% discount on the above fares.

Riding the COASTER without a valid ticket may result in a penalty fare of up to $250. Riders cannot purchase tickets on board the train.

Compass cards
In September 2008, SANDAG introduced a new contactless "Compass Card", made possible by Cubic Transportation Systems, Inc. The "Compass Card" allows passengers from MTS and NCTD to store regional transit passes and cash value on a re-writable RFID card. Customers can purchase passes and add cash value on the Internet or at any ticket vending machine. Prior to boarding a train, customers tap their Compass Cards on the ticket validator located on the train platform. The LED display on the validator then lights up with lights resembling that of a stoplight, and the LCD display shows text regarding the passenger's fare account.

Ridership
The COASTER carried about 514,450 passengers during its first year of operation, and ridership rose steadily in the years that followed. In 2012, COASTER ridership was approximately 1.6 million people, with an average number of 5,600 weekday boardings.

In June 2018, the North County Transit District Board of Directors approved the purchase of five Siemens Charger  locomotives. Charger locomotives to replace their existing five F40PHM-2C locomotives that were re-manufactured by Morrison-Knudsen. Deliveries are expected in the first half of 2021, with $10.5 million of the estimated $53.9 million cost earmarked from statewide gas tax and vehicle registration fees.

In August 2018, NCTD announced that they were seeking public opinions and input on a re-brand of the agency. This included two new paint scheme ideas for COASTER, along with the existing scheme being used as a third option. The new COASTER livery will be decided upon by agency officials depending on the public input and will be painted on the new Siemens Chargers and passenger cars in 2021.

Yards
NCTD maintains two rail storage yards for the COASTER. The main storage yard, located north of Oceanside at Stuart Mesa on Camp Pendleton, is just north of the Oceanside station stop. This is where cars are stored for the night and trains are serviced, although due to the small size of the yard, COASTER trainsets are also stored at the nearby Fallbrook Yard when out of service. Tracks 25, 26 and 27 of the San Diego Trolleys' yard at 12th and Imperial in Centre City San Diego is used to store train-sets during the midday and for weekday train staging, and is shared with the San Diego Trolley and the San Diego and Imperial Valley Railroad.

Future prospects
The COASTER remains stable for the foreseeable future. San Diego County voters extended the TransNet sales tax through 2038, which includes funding for rail track upgrades. By the early 2010s, numerous improvements such as added double track and bridge replacements were in various stages of construction and design. As part of the broader North Coast Corridor project, approximately $1 billion is planned to be spent on new segments of double track between San Diego and Orange County.

There are also plans to extend COASTER service to Camp Pendleton and the Convention Center, as well as interest in building a new 'special events' platform at Del Mar to seasonally serve the racetrack and fairgrounds.