It ran from St. Louis, Missouri, to Texarkana, Arkansas, as well as to southeast Missouri. The line was initially established to deliver iron ore from Iron Mountain, Missouri to St. Louis. The company was frequently referred to as the St. Louis Iron Mountain & Southern (StLIM&S) or shortened to simply the Iron Mountain Railway.

The railroad was robbed twice, once by the James-Younger Gang on January 31, 1874, at Gad's Hill, Missouri, and once by the "One-Time Train Robbery Gang".on November 3, 1893, at Olyphant, Arkansas.

Folklore
The railroad is famous for giving its name to the Iron Mountain Baby, and the railroad is reported to have paid for the child's education.

Iron Mountain Baby refers both to a folksong and the subject of that song, William Moses Gould Helms.

On August 14, 1902, William Helms (June 5, 1835 – December 13, 1917), a 72-year-old farmer and civil war veteran, was walking along the St. Louis, Iron Mountain and Southern Railway (later the Missouri Pacific Railroad) where it crosses Big River outside of Irondale (Washington County, Missouri), collecting lumber for a barn he intended to build. He saw No. 4 speed northbound over the bridge. Then, hearing a strange noise and following its source, he found what is described as "an old fashioned telescoping valise." The case turned out to contain a baby, whose age was later estimated at approximately five days. Having fallen about 50 feet (15 m), the child was badly bruised, with a pronounced dent in its head. Helms took the child home to his wife, Sarah Jane Knight Helms (July 10, 1850 – April 15, 1925) and they nursed him back to health.

The child was named for his foster father, Bill Helms, and "Gould," the owner of the railroad, but also "Moses," because he was taken from the river. The story spread throughout the United States, and gave rise to the folksong. Many women came forward, claiming to be the boy's mother. However, when the child was six years old, the elderly couple formally adopted him.

After the death of the elder Helms, William and his mother moved to Salem, Missouri. He attended Braughton's University and Southwest Missouri State Teachers College(now Missouri State University); his education was paid for by the St. Louis Iron Mountain & Southern Railway. He became a printer. On August 5, 1933 he married a woman named "Sally," (September 17, 1904, d. Racine, Wisconsin, September 1987). They had one son, William (died at age 14, according to some sources).

They later moved to Texas, where William died January 31, 1953, aged 50. When the corpse was carried by train back to Washington County, it was only the second time William had ridden a train. He was interred at Hopewell, Missouri Cemetery. The funeral got no publicity; Helms did not enjoy his peculiar fame.

The Ballad of the Iron Mountain Baby (likely has changed from the original version, written by Rev. J.T. Barton in late 1902 or early 1903, which is said to have had 14 stanzas).

(the ballad mistakes certain key details—the number of the train, the names of the principals, etc.).

I have a song I'd like to sing
It's awful but it's true
About a baby, thrown from a train
By a woman, I know not who.

Th' train was running at full speed
T'was northbound number nine (actually it was Northbound Number Four, and the rhyme scheme suggests that Barton knew this)
An' as it crossed th' river's bridge
She cast it from the door.

A Mother unkind, a Father untrue
And yet, I'm bound to say
It must have grieved that Mother's heart
To cast her baby away.

The leaves (i.e., valise) in which this baby was found
Was fourteen inches long
Five inches wide, six inches deep
An', O, so closely bound.

It was Bill Williams who found this babe (actually was Bill Helms; it was probably corrupted to Williams due to phonetic similarity)
He heard its helpless cry
He took it to his loving wife;
She would not let it die.

We'll name him William Roscoe (he was actually given the name William Moses)
Because he has no name
Then, if he grows to be a man
He'll wear it just th' same.

This ends my song, my story I've told
I'll say, goodbye to all
Until we meet around the throne
In that bright world above all.

The story is also the subject of the song, "Sarah Jane and the Iron Mountain Baby," from the 2013 album, Love Has Come for You, by Steve Martin and Edie Brickell.

A version of the events of the story contribute to the plot of Bright Star, a 2014 musical by Steve Martin and Edie Brickell.

Heritage railroad
The name has been resurrected by a modern short line railroad based in Jackson, Missouri. The St. Louis, Iron Mountain and Southern Railway operates a heritage railroad in Cape Girardeau County, Missouri.

An 1898 ad for the Pacific Coast Limited, operated jointly with the Chicago and Alton Railroad, Texas and Pacific Railway, and Southern Pacific Railroad. 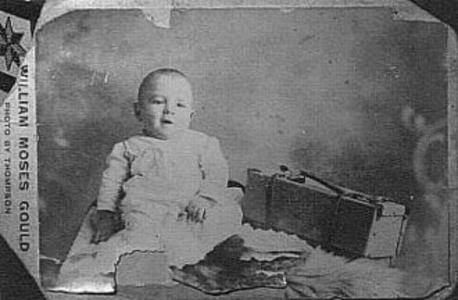 The Iron Mountain Baby and his infamous valise. 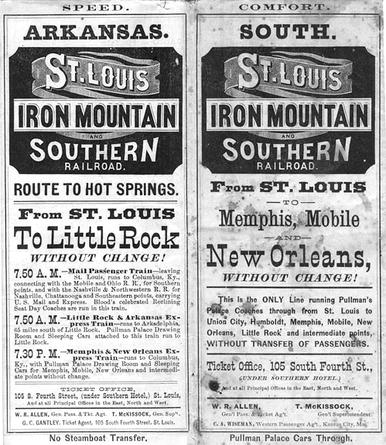 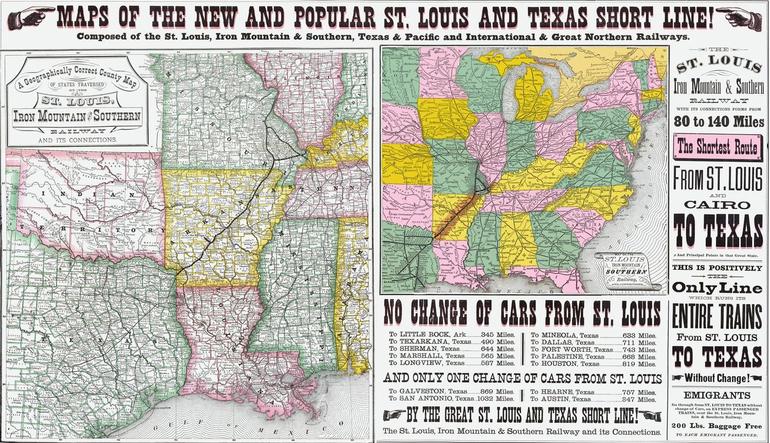 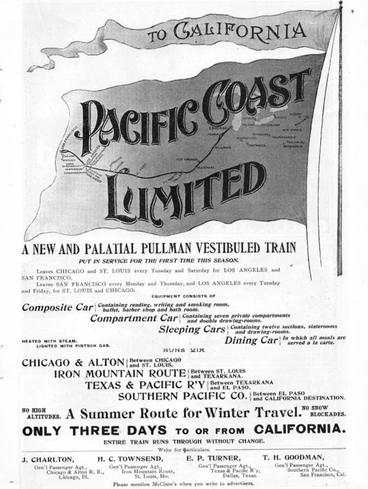 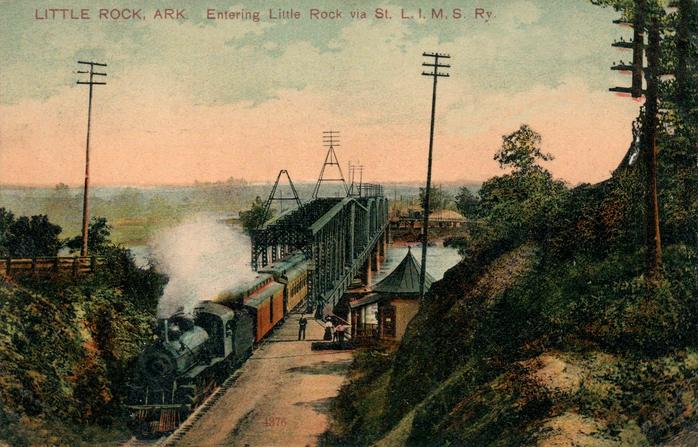 Maps of the St. Louis, Iron Mountain and Southern and connections.