Boy and girl waiting in the station, circa 1899. St. Louis, San Francisco and Texas Railway
The St. Louis, San Francisco and Texas Railway (reporting mark SLSF) was a subsidiary railway to the St. Louis-San Francisco Railway (Frisco) operating 159 miles of railway line in Texas. The Frisco, including the subsidiary, formed a large X-shaped system across the states of Kansas, Missouri, Oklahoma, Texas, Arkansas, Mississippi and Alabama. It merged into SLSF at the beginning of 1964; SLSF merged into the Burlington Northern Railroad in 1980.

The St. Louis, San Francisco and Texas Railway Company was chartered on March 9, 1900, in the interest of the St. Louis and San Francisco Railroad Company (Frisco), to build between Denison, Texas, and the Red River. The charter was subsequently amended to allow the railroad to build from Denison to Sherman. Initial capital was set at $200,000 and the office was located at Denison in Grayson County. The office was moved to Fort Worth in 1904. Members of the first board of directors included R. C. Foster of Denison; H. D. McDonald of Paris, Texas; W. C. Preston and W. A. Tuley of Dallas; D. B. Robinson and Benjamin F. Yoakum of St. Louis; and J. H. Atterbury of Letchfield, Illinois. The 5.3-mile line of the SLSF&T to Denison was completed in early 1901, and was extended to Sherman in March 1901 via trackage rights over the Houston and Texas Central Railroad. The company connected with the Frisco line from Sapulpa, Oklahoma, at the Red River. In order to attract the SLSF&T, the city of Sherman offered the company a bonus of $15,000, right-of-way, and forty acres of land for a terminal. The company also built its shops at Sherman. In 1903 the road earned $15,571 in passenger revenue, $443,617 in freight revenue, and $237 in other revenue.

On June 25, 1904, the SLSF&T acquired the Red River, Texas and Southern Railway Company. This fifty-three-mile-long railroad was opened between Sherman and Carrollton in 1902 and reached Dallas and Ft. Worth over a combination of leased track and trackage rights. Two other Frisco properties-the Blackwell, Enid and Texas Railway, operating between the Red River and Vernon, and the Oklahoma City and Texas Railroad, which had built between Red River and Quanah, were acquired on June 30, 1904, and July 25, 1904, respectively. Another Frisco subsidiary, the Paris and Great Northern Railroad operating between Red River and Paris, was merged on June 1, 1928. At this time the SLSF&T consisted of four disconnected track segments extending from connections with various Frisco lines at the Red River. The company owned 104 miles of main track and operated over an additional fifty-four miles via trackage rights or leased track. Of the owned mileage, the nine miles from the Red River to Quanah was, in turn, leased to the Quanah, Acme and Pacific for operation. In 1930 the Frisco acquired the Gulf, Texas and Western Railway Company, with 107 miles of track between Seymour and Mineral Wells. This company was then leased to the SLSF&T, which operated the line until it was abandoned by the Frisco in 1939.

Although short in mileage, the SLSF&T handled a relatively large volume of traffic since it gave the Frisco access to the Texas market. In 1931 the SLSF&T was listed as a Class I road by the Railroad Commission. Earnings that year included $109,553 in passenger revenue, $1,303,638 in freight revenue, and $45,947 in other revenue. In 1957 the company abandoned the twelve miles between the Red River and Vernon. In 1962 passenger earnings were only $2,276, while freight revenue was $4,576,850 and other revenue $40,316. The SLSF&T was merged into its parent, the St. Louis-San Francisco Railway Company, on January 1, 1964. On November 21, 1980, the Frisco itself was merged into the Burlington Northern Railroad Company.   Handbook of Texas Online, David Minor, "St. Louis, San Francisco and Texas Railway," accessed October 27, 2016, http://www.tshaonline.org/handbook/online/articles/eqs31. 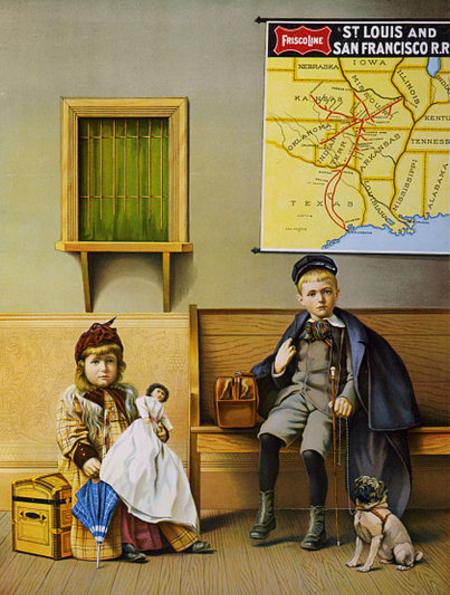