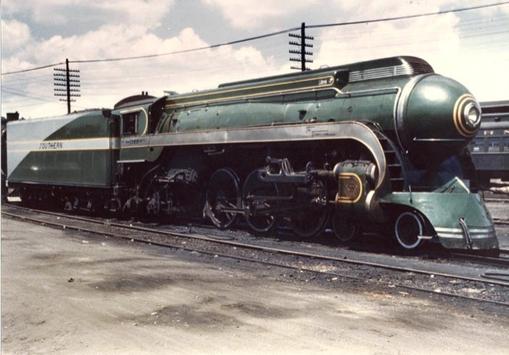 Southern Railway
The Southern Railway (reporting mark SOU) was a Class 1 railroad from 1894 until 1990 that operated 6,344 miles of road in the states of Alabama, Florida, Georgia, Illinois, Indiana, Kentucky, Louisiana, Mississippi, Missouri, North Carolina, South Carolina, Tennessee, Virginia, and the District of Columbia. Its headquarters were in Washington, D.C.  It was the product of nearly 150 predecessor lines that were combined, reorganized and recombined beginning in the 1830s, formally becoming the Southern Railway in 1894.

History
The pioneering South Carolina Canal and Rail Road Company, Southern's earliest predecessor line and one of the first railroads in the United States, was chartered in December 1827 and ran the nation's first regularly scheduled steam-powered passenger train – the wood-burning Best Friend of Charleston – over a six-mile section out of Charleston, South Carolina, on December 25, 1830. (The Baltimore and Ohio Railroad ran regular passenger service earlier that year.) By 1833, its 136-mile line to Hamburg, South Carolina, was the longest in the world.

As railroad fever struck other Southern states, networks gradually spread across the South and even across the Appalachian Mountains. By 1857 the Memphis and Charleston Railroad was completed to link Charleston, South Carolina, and Memphis, Tennessee, but rail expansion in the South was halted with the start of the Civil War. The Battle of Shiloh, the Siege of Corinth and the Second Battle of Corinth in 1862 were motivated by the importance of the Memphis and Charleston line, the only East-West rail link across the Confederacy. The Chickamauga Campaign for Chattanooga, Tennessee was also motivated by the importance of its rail connections to the Memphis and Charleston and other lines. Also in 1862 the Richmond and York River Railroad, which operated from the Pamunkey River at West Point, Virginia to Richmond, Virginia, was a major focus of George McClellan's Peninsular Campaign, which culminated in the Seven Days Battles and devastated the tiny rail link. Late in the war, the Richmond and Danville Railroad was the Confederacy's last link to Richmond, and transported Jefferson Davis and his cabinet to Danville, Virginia just before the fall of Richmond in April 1865.

Known as the "First Railroad War," the Civil War left the South's railroads and economy devastated. Most of the railroads, however, were repaired, reorganized and operated again. In the area along the Ohio River and Mississippi River, construction of new railroads continued throughout Reconstruction. The Richmond and Danville System expanded throughout the South during this period, but was overextended, and came upon financial troubles in 1893, when control was lost to financier J.P. Morgan, who reorganized it into the Southern Railway System.

Southern Railway came into existence in 1894 through the combination of the Memphis and Charleston Railroad, the Richmond and Danville system and the East Tennessee, Virginia and Georgia Railroad. The company owned two-thirds of the 4,400 miles of line it operated, and the rest was held through leases, operating agreements and stock ownership. Southern also controlled the Alabama Great Southern and the Georgia Southern and Florida, which operated separately, and it had an interest in the Central of Georgia.

Southern's first president, Samuel Spencer, drew more lines into Southern's core system. During his 12-year term, the railway built new shops at Knoxville, Tennessee, and Atlanta, Georgia and purchased more equipment. He moved the company's service away from an agricultural dependence on tobacco and cotton and centered its efforts on diversifying traffic and industrial development. Spencer was killed in a train wreck in 1906.

After the line from Meridian, Mississippi, to New Orleans, Louisiana was acquired in 1916 under Southern's president Fairfax Harrison, the railroad had assembled the 8,000-mile, 13-state system that lasted for almost half a century. (SR itself operated 6,791 miles of road at the end of 1925, but its flock of subsidiaries added 1000+ more.)

The Central of Georgia became part of the system in 1963, and the former Norfolk Southern Railway was acquired in 1974. Despite these small acquisitions, the Southern disdained the merger trend when it swept the railroad industry in the 1960s, choosing to remain a regional carrier. In 1978 President L. Stanley Crane said the refusal to add routes through merger was a mistake, especially the decision not to add a connecting route to Chicago.

Merger into Norfolk Southern
In response to the creation of CSX in 1980, the Southern Railway merged with Norfolk and Western Railway to form the Norfolk Southern Railway in 1982, further consolidating railroads in the eastern half of the United States.two railroads that would have offered access to Chicago, the Monon Railroad and the Chicago and Eastern Illinois Railroad, which both went to Southern's competitor, the Louisville and Nashville Railroad. A decade later Crane tried to rectify the situation by merging with the Illinois Central Railroad. When that failed, he petitioned the Interstate Commerce Commission to give Southern the old Monon routes and the old Atlantic Coast Line route from Jacksonville to Tampa by way of Orlando among other properties as a condition of the I.C.C.'s approval of the Seaboard Coast Line - Chessie System merger in 1979. While the request was supported by the I.C.C.'s Enforcement Bureau, it was ultimately unsuccessful.

From dieselization and shop and yard modernization, to computers and the development of special cars, the unit coal train and Radio Controlled Mid-Train Helper Locomotives, Southern often was on the cutting edge of change, earning the company its catch phrase, "Southern Gives a Green Light to Innovation".

In 1966, a popular steam locomotive excursion program was instituted under the presidency of W. Graham Claytor, Jr., and included Southern veteran locomotives such as Southern 630, Southern 722 and Southern 4501, along with non-Southern locomotives, such as Texas & Pacific 610, Canadian Pacific 2839 and Chesapeake & Ohio 2716. The steam program survived the 1982 merger with the Norfolk and Western to form the Norfolk Southern. The program was discontinued in 1994 but was reinstated on a limited basis in 2010 as the 21st Century Steam program.

In the early 2000s, a 22-mile loop of former Southern Railway right-of-way encircling central Atlanta neighborhoods was acquired and is now the BeltLine trail.

These type of repair service facilities for the railroads were called "back shops". They were located in every division of a railroad system and centralized for the most extensive kinds of repairs. The Spencer Shops "back shops" were named in honor of the first president of the Southern Railway, Samuel Spencer (1847 – 1906), as was the name of the new town developed for these facilities.

The original buildings included a machine shop, storehouse building, office building, wood working shop, and a combination smith and boiler shop. It even had a power plant, an automobile repair facility, and a 37-bay roundhouse where locomotives could be worked on. It employed between 2,500 and 3,000 at any one time.

History of the Spencer Shops
The financial firm of Drexel, Morgan and Company created the newly formed Southern Railway Company in 1894 following the financial failure of the Richmond and Danville Railroad system, which had included the East Tennessee, Virginia and Georgia Railroad, and several other smaller railroads. The finance company's railroad expert was Samuel Spencer, who had previously served as superintendent of the Long Island Rail Road in 1878 and headed the Baltimore and Ohio Railroad (1887–1888). J. Pierpont Morgan tapped Samuel Spencer to head the new enterprise, one of the largest in the United States.

The new Southern Railway began with two major repair facilities, one in Atlanta, Georgia, the other in Knoxville, Tennessee. Much of the inherited rolling stock from the acquisitions of the defunct railroads were in need of major repairs. These two "back shops" service centers could not handle this extensive service need.  These facilities were "antiquated and poorly equipped and not sufficient for their purposes," Samuel Spencer said.  Spencer saw the need for a third major "back shop" service facility on this eastern main line between Washington D.C. and Atlanta. He reported also in the first annual meeting of June 1895 "one additional large shop may be necessary." This way the repair facilities would be divided up into segments of about 160 miles apart. The switch locomotives needed to be inspected for repair and service and refueled at this increment. The new major "back shop" service facility was proposed to be in the middle of these two major cities.

Secret negotiations, building at a new location
The development of the facilities for Spencer Shops started with John Steele Henderson. He was a Confederate veteran, a former state senator and Rowan county's largest landholder at the time. History records that Henderson entered into secret negotiations with Southern Railway officials for land acquisitions for the proposed major facility to act as a type of front dummy entity to prevent price speculating. He was to buy the land secretly for the new shop complex and sell it back to the railroad at or near the low price he paid.  It was already known in 1896 by the public that the Southern Railway was looking for potential land for this facility and at the time the Charlotte area was seen as the logical choice for the complex.  It would not seem unusual for the largest county landholder to acquire more land, so this plan of using a "front" person for acquiring large parcels of land for this purpose could keep the real purpose secret from the public. Most thought anyway that the facility was going to be put in the Charlotte area.

In January 1896 Henderson began buying large tracts of land two miles north of Salisbury directly on Southern Railroad's main line. He then sold most of it back to the Southern Railway for slightly more than he paid for it. Henderson did profit however from this secret arrangement. He sold land that he owned in this area to other people that worked for the shops. At the turn of the century he even sold some land back to Southern Railway for a large profit that he had kept for himself.

The workmen constructing the shops began on March 23, 1896, turning the first shovels of 75,000 cubic yards of dirt moved in the construction. It opened for business on August 19, 1896, with Samuel Spencer presiding at the opening ceremonies.

Town of Spencer
Spencer Shops had a small army of thousands of workers. There were skilled workers as well as engineers, firemen, brakemen, and conductors. Many of these settled down in the area and the town of Spencer was formed. Initially Southern Railway partitioned 84 acres into 500 lots. They were 50 × 145 for residential lots and 25 × 145 for commercial lots. They sold for $100 each. The 625 residents of Spencer were granted incorporation by North Carolina legislature in 1901.