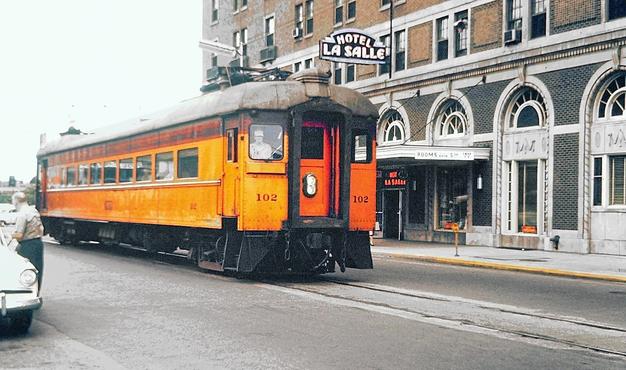 A Bilevel unit train about to depart from Miller Station on the NICTD South Shore Line in 2011.

South Shore Line
The South Shore Line (reporting mark NICD) is an electrically powered interurban commuter rail line operated by the Northern Indiana Commuter Transportation District (NICTD) between Millennium Station in downtown Chicago and the South Bend International Airport in South Bend, Indiana. The name refers to both the physical line and the service operated over that route. The line was built in 1901–08 by predecessors of the Chicago South Shore and South Bend Railroad, which continues to operate freight service. Passenger operation was assumed by the NICTD in 1989.

History
Private operation
The South Shore Line was constructed between 1901–08 by the Chicago and Indiana Air Line Railway, which was reorganized as the Chicago, Lake Shore and South Bend Railway (CLS&SB) in 1904. Revenue service between Michigan City and South Bend began on July 1, 1908. The CLS&SB leased the Kensington and Eastern Railroad on April 4, 1909, giving it access to Chicago. That year the full line to Kensington on the Illinois Central was completed, and beginning on June 2, 1912, the electric cars were coupled to IC steam locomotives and run to downtown Chicago.

The Chicago, Lake Shore and South Bend entered bankruptcy in 1925 and was bought by Samuel Insull's Chicago South Shore and South Bend Railroad (CSS&SB).The line continued to handle both freight and passengers. Under Insull, the CSS&SB embarked on a major rehabilitation program. This included new ballast and ties, 100-pound (45 kg) rail in place of 70-pound (32 kg) rail, brush clearance, and an overhaul of the line's block signals. In 1946 the company acquired three Little Joe electric locomotives for freight service. These locomotives had originally been constructed for the Soviet Union, but changing attitudes due to the Cold War prevented them from being delivered. These locomotives continued in freight service on the CSS&SB until 1983, making them the last electric locomotives in regular freight service in the U.S. No. 803, is preserved in operating condition at the Illinois Railway Museum.

The power system was changed from 6600 volts AC to 1500 volts DC on July 28, 1926, allowing trains to operate directly to the Illinois Central Railroad's Randolph Street Terminal without an engine change. Trains began running to Chicago on August 29. That same year, the original line between East Chicago and Indiana Harbor was abandoned.

The Chicago South Shore and South Bend turned a profit during World War II due to the industrial nature of Northern Indiana. However, highway competition and suburban growth led to ridership declines. By the 1950s all interurban lines were seeing a decline in rail travel as automobile use increased. On September 16, 1956, a street running section in East Chicago was removed with the building of a new alignment alongside the Indiana Toll Road. A truncation to west of downtown South Bend removed street trackage in that city from July 1, 1970.

The Chesapeake and Ohio Railway acquired the CSS&SB on January 3, 1967 and continued the operation of passenger services. The Chicago South Shore and South Bend was one of six railroads with long-distance passenger services to decline joining Amtrak in 1971 and in 1976, they asked the Interstate Commerce Commission (ICC) to abandon passenger service. The ICC gave the state of Indiana a chance to reply and subsequently, the Northern Indiana Commuter Transportation District (NICTD) was formed in 1977 to subsidize service.

Public operation
In the late 1980s, the Chicago South Shore and South Bend went bankrupt and on December 29, 1989, passenger service was assumed by NICTD. In December 1990, the track was sold to NICTD and freight service was taken over by the new Chicago South Shore and South Bend Railroad, a subsidiary of short line operator Anacostia & Pacific. On November 21, 1992, the line's South Bend terminus moved from the Amtrak station to the airport. On July 5, 1994, NICTD closed the Ambridge, Kemil Road, Willard Avenue, LaLumiere, Rolling Prairie, and New Carlisle flag stops. A seventh station, Dune Acres, closed around the same time once parking was expanded at nearby Dune Park.

The railroad began a three-year project in 2009 to replace all catenary on its line between Michigan City and Gary, some of which was nearly 90 years old. The project cost $18 million, and caused service disruptions on weekends (five in August–October 2009, one in May 2010 and five more in August–November 2010) while new wires were strung. The 2009 and 2010 weekend outages truncated trains at Gary Metro Center. During the August–November 2010 disruptions Amtrak's Wolverine provided service to the Amtrak Michigan City station.

Route
Departing South Bend Airport, the South Shore Line heads south alongside Bendix Drive, then west along Westmoor Street, before connecting with the tracks that ran to its former terminus. Between that point and Hudson Lake, Indiana, the South Shore Line runs parallel to Norfolk Southern's Chicago Line, also used by Amtrak's Lake Shore Limited and Capitol Limited, on the north side of the tracks. Just before Hudson Lake, the line crosses from St. Joseph County into LaPorte County and enters the Central Time Zone.

From Hudson Lake, the South Shore continues straight west to Michigan City. In Michigan City, the track runs down the middle of 11th street from Michigan Boulevard to Tennessee Street, where it crosses over to Tenth Street, and has an at-grade diamond with Amtrak's Michigan Services. The track then runs down Tenth Street to Sheridan Avenue on the west side of Michigan City. Leaving Michigan City, the track travels through Indiana Dunes State Park, crosses over the Chicago Line and runs parallel to it, this time on the south side, past Long Lake. At Gary, Indiana, the route heads west to service the Gary Airport, at times running parallel to the Indiana Toll Road, as far as Hammond, Indiana. Just west of the Hammond station, the route crosses into Illinois and Chicago city limits, at which point the track curves northwest, through the Hegewisch neighborhood and, after crossing the Bishop Ford Freeway and the Calumet River, converges with the Metra Electric line south of Kensington/115th Street station. The South Shore Line then runs over the Metra Electric from Kensington/115th Street the rest of the way to Millennium Station.

The line is quadruple tracked along the section shared with the Metra Electric line from Millennium Station to Kensington/115th Street, double-tracked from Kensington/115th Street to east of Gary Metro Center. From there it is single-tracked with passing sidings to South Bend Airport, save for a 6.5-mile (10.5 km) stretch of double track around Ogden Dunes and the yard at Michigan City. As of 2016 NICTD is studying double-tracking an additional 25 miles (40 km) between Gary and Michigan City at an estimated cost of $210 million.

Onboard Educational Programs
Interpretive Guides with the 501(c)(3) non-profit American Passenger Rail Heritage Foundation ride the South Shore Line roundtrip on select Saturdays between Millennium Station and South Bend Airport station providing passengers with onboard educational programs. These APRHF Rail Rangers programs are also sponsored by the Northern Indiana Commuter Transportation District and the Indiana Dunes National Lakeshore. Guides tell passengers what they are seeing out the window, including about the four units of the National Park Service the train line passes through or near.

Retired Rolling Stock
Pullman-Standard and the Standard Steel Car Company delivered electric multiple units to the CSS&SB between 1926–1929. Many were lengthened in the 1940s and 1950s.

Notes: Built as trailers. Rebuilt in 1915 with motors. Baggage compartments added in 1925. Scrapped in summer of 1929.

Notes: Built as a replacement for car 60.

Notes: Rebuilt from parlors built in 1929.

Fare policies
The South Shore Line uses a zone-based fare system, with prices based on the distance traveled and stations' proximity to Millennium Station. There are a total of eleven zones (1–11). Tickets may be purchased at stations, aboard the train, or online. Ticket options include one-way, 10-ride, 25-ride, and monthly passes. A $1.00 service fee is charged for tickets purchased on the train when a ticket agent was present at the departure station. Children aged 13 years or under, seniors aged 65 or over, passengers with disabilities, and active-duty military personnel are eligible for reduced fares. NICTD accepts cash aboard trains, cash and checks at ticket offices, and credit cards online. Some stations have ticket vending machines which accept credit cards. For Hegewisch station (zone 3), fares are set by Metra.

Proposed expansions
Michigan City realignment
Since 2005, there has been an ongoing debate pertaining to plans to relocate trackage off the streets of Michigan City. In July 2009, NICTD announced its intention to relocate the Michigan City track south of its current location in order to smooth out the curves, cut down the number of grade crossings, increase speed and reduce maintenance costs. The plan also calls for the replacement of both current stations with a single new station located a block west of the current 11th Street boarding location (between Franklin and Washington streets) with a modern, high-level platform and parking lot. The plan would require a demolition of residential and retail buildings currently located on the south side of 11th Street.

The relocation effort faced a setback on March 2010 when NICTD announced that it was short necessary funds to complete the preliminary engineering study. Unless the funding was found, the relocation would have been postponed indefinitely since, without the engineering study, NICTD would not be able to get state and federal funds necessary to complete the relocation. NICTD and the city continued to work on obtaining the funds needed. In 2011 NICTD accepted bids for a $1 million study, expected to take 18 months. The study was completed in October 2013. The preferred alternative identified by the study preserves an alignment similar to the current route but relocates the tracks alongside the street. It proposes replacing the two existing stations with a new station near the center of Michigan City.

West Lake Corridor
Furthermore, NICTD planned to apply for federal funding for a preliminary engineering study and environmental survey of a Hammond-to-Lowell leg in 2009. As of 2008, that leg had a projected price tag of $551 million. As of 2017, the cost has increased to $605 million, and the project is estimated to complete in 2022.

The new line will run to Dyer, with a later extension to St. John, and trains will run as shuttles between Hammond and Dyer during off-peak hours. The alignment of the new branch leaves the old CSS&SBmain immediately before the current Hammond station. Hence, the NICTD has decided to build a new station in Hammond to serve both branches. 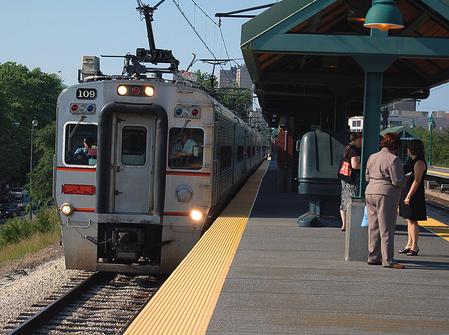 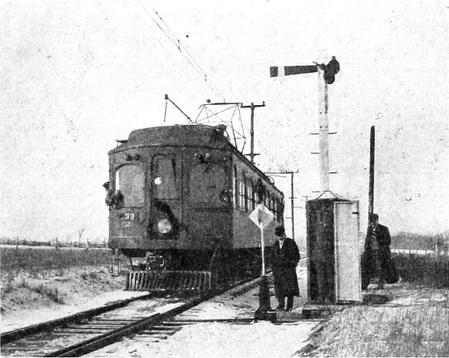 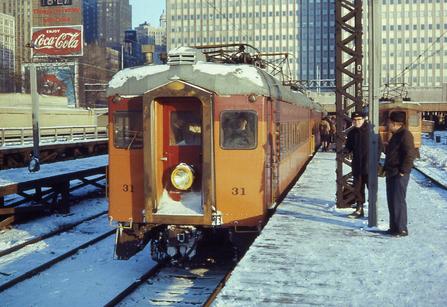 A Chicago, Lake Shore & South Bend limited train near the Indiana Dunes in the 1920s. 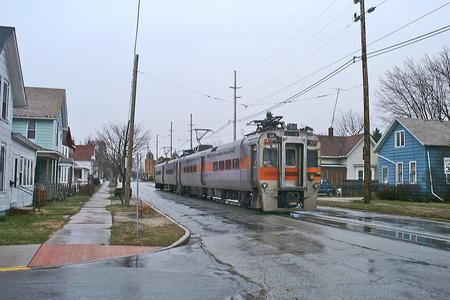 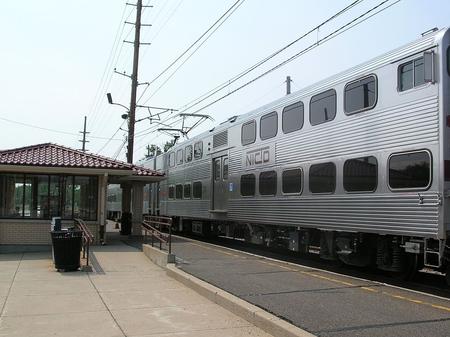 A Chicago, Lake Shore and South Bend wood-bodied interurban car at a siding, circa 1909.

A South Shore Line Slideshow. All photos by Roger Puta.