Spokane, Portland and Seattle Railway
The Spokane, Portland & Seattle Railway (SP&S) (reporting mark SPS) was a Class I railroad operating at its peak 922 miles in Oregon and Washington from 1905 until 1970. It was headquartered in Portland, Oregon and was a joint venture by the Great Northern Railway and the Northern Pacific Railway to build a railroad along the north bank of the Columbia River. Remnants of the line are currently operated by BNSF Railway.

History
The railroad was chartered in 1905 by James J. Hill to connect the two transcontinental railroads owned by him, the Northern Pacific (NP) and Great Northern (GN), to Portland, Oregon from Spokane, Washington, to gain a portion of the lumber trade in Oregon, a business then dominated by E.H. Harriman's Union Pacific and Southern Pacific railroads. Construction began in 1906 under the name Portland & Seattle Railway, proceeding eastward from Vancouver, Washington. 1906 also saw the start of construction of the line between Vancouver and Portland, including work on three major new bridges, crossing the Columbia River, the Oregon Slough and the Willamette River. The northernmost of these was the first bridge of any kind to be built across the lower Columbia River.

Despite legal challenges from Harriman, within a year the line had been built as far as Pasco, Washington along the Columbia River, where it connected with NP. The first section to open was from Pasco west to Cliffs (near Maryhill), a length of 112 miles, on December 15, 1907. Operation was extended west to Lyle, another 145 miles, on January 15, 1908, as construction continued on the 221-mile section from there to Vancouver.

In January 1908 "Spokane" was added to the railroad's name, making it the Spokane, Portland & Seattle Railway. SP&S freight and passenger service (from Pasco) to Portland was inaugurated in November 1908. By 1909 the railroad had completed construction of its line up to Spokane along the Snake River. In 1910 SP&S gained control of the Oregon Electric interurban railway, which the Great Northern had acquired two years before. Under the control of the SP&S the railroad was extended southward to Eugene, Oregon by 1912. SP&S also operated a second subsidiary railroad in western Oregon, the Oregon Traction Company, which owned a route to Seaside, Oregon. A third route on which the SP&S operated extended southward from Wishram, Washington to Bend, Oregon was the Oregon Trunk Railroad. Edward Harriman's Oregon & Washington Railway & Navigation Company also was building a railroad south from the Columbia River to Bend resulting in a railroad war in which each railroad attempted to sabotage the other. In the end, the railroad opened using mostly the track of the Oregon Trunk, with a short portion of the Oregon & Washington Railway & Navigation Company track, and both railroads used the route (an arrangement that still exists with BNSF owning the majority of the line and UP having trackage rights).

In 1954 an SP&S train derailed after hitting a rockslide on the route to Bend, Oregon. Part of the train landed in the Deschutes River, including a boxcar, which landed in a rapid that was later named "Boxcar Rapids" after the incident, which, sadly, killed all crew members.

The SP&S's passenger operations mostly involved hosting connections with parents' trains, such as the Empire Builder and North Coast Limited, which were combined to form the Streamliner (No. 1/No. 2). Oriental Limited, Mainstreeter, and Western Star connected with (No. 3/No. 4). However, some of these SP&S trains were named. The Inland Empire Express (daytime) and North Bank Limited (overnight) provided daily, through service between Portland (Union Station) and Spokane. The Columbia River Express (No. 5/No. 6) operated between Portland and Pasco, connecting at Pasco with Northern Pacific No. 5/No. 6 for service to/from Spokane. 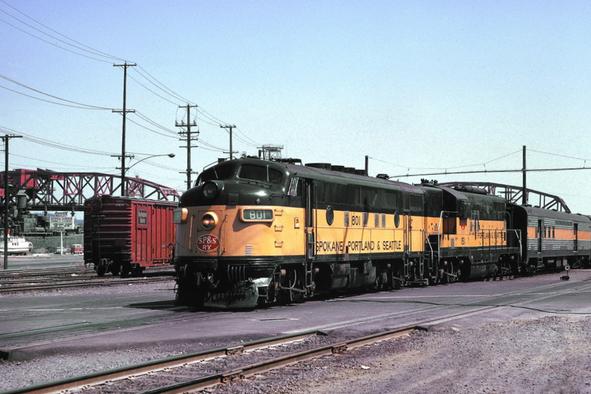