The Cotton Belt ran passenger trains from St. Louis to Texas and from Memphis to Dallas and Shreveport, Louisiana. Cotton Belt's Lone Star operated from Memphis Union Station to Dallas Union Terminal with a connecting section from Lewisville, Arkansas, to Shreveport. The Morning Star was the second named train over much of this route, operating out of St. Louis Union Station to Dallas, with a separate Memphis section inaugurated in 1941 to provide a convenient connection with the Southern Railway's Tennessean to and from Washington, D.C. and New York City. The Cotton Belt also operated passenger trains between Mt. Pleasant, Tyler and Waco, and a doodlebug between Tyler and Lufkin.

Cotton Belt 819
St. Louis Southwestern 819 is maintained at the Arkansas Railroad Museum in Pine Bluff, Arkansas, by the Cotton Belt Rail Historical Society. The No. 819 is a L1 class 4-8-4 "Northern" and was historically the last new steam locomotive rostered by the Cotton Belt, being home built at the Pine Bluff Shops in 1943. After its retirement it spent several decades on static display in Oakland Park in Pine Bluff until members of the Cotton Belt Rail Historical Society moved the locomotive back to the Pine Bluff Shops where they began a three year restoration appropriately called "Project 819". The 819 eventually returned to the rails for a second time in April 1986 and operated annually to various points on the railroad (trips to Fordyce, Little Rock, St. Louis, Tyler and Athens) until making its final run between Tyler, Texas and Pine Bluff on October 17, 1993. Today the 819 is the centerpiece of the Arkansas Railroad Museum housed inside the Pine Bluff Shops. 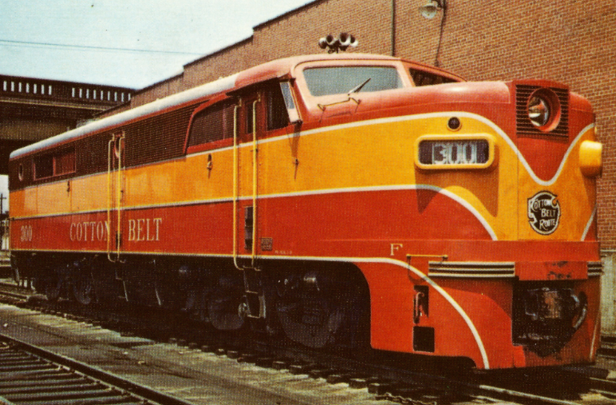 Corporate history
The Cotton Belt was one of the lines comprising the railroad empire acquired by financier Jay Gould in the last quarter of the 19th century; according to the Handbook of Texas, "By 1890 Gould owned the Missouri Pacific, the Texas and Pacific, the St. Louis Southwestern, and the International-Great Northern, one-half of the mileage in the Southwest."

The railroad was organized on January 15, 1891, although it had its origins in a series of short lines founded in Tyler, Texas, in 1870 that connected northeastern Texas to Arkansas and southeastern Missouri. Construction of the original Tyler Tap Railroad began in the summer of 1875.

On October 18, 1903, the Cotton Belt gained trackage rights via the Thebes Bridge and the Missouri Pacific Railroad along the eastern shore of the Mississippi River to reach East St. Louis, Illinois, and then used Terminal Railroad Association trackage rights into St. Louis. The Cotton Belt also operated a yard and a locomotive servicing facility in East St. Louis, just east of Valley Junction, and south of Alton and Southern Railroad's Gateway Yard, and north of Kansas City Southern's East St. Louis Yard. They also had a freight station in downtown St. Louis. Union Pacific Railroad now operates the yard (still named "Cotton Belt Yard"), but the engine servicing facilities have been demolished.

The Southern Pacific Company gained Interstate Commerce Commission approval to control the Cotton Belt system on April 14, 1932, but continued to operate it as a separate company until 1992, when the SP consolidated the Cotton Belt's operations into the parent company. Cotton Belt diesel locomotives from 1959 on were painted in Southern Pacific's "bloody nose" scheme - dark gray locomotive body with a red "winged" nose. "Cotton Belt" was painted on the sides and in later years the letters "SSW" were painted on the nose.

In 1996 the Union Pacific Railroad finished the acquisition that was effectively begun almost a century before with the purchase of the Southern Pacific by UP in 1901, until divestiture was ordered in 1913. The merged company retains the name "Union Pacific" for all railroad operations. Many former SSW locomotives are used by Union Pacific today, although few still sport unmodified "Cotton Belt" paint. Most of the remaining units have been repainted into the UP scheme, while others wear patched SSW paint with a UP shield logo and new numbers applied over the SSW number.