History
Early history 1856-1880
The Texas and New Orleans Railroad was chartered as the Sabine and Galveston Bay Railroad and Lumber Company in 1856, and was formed to build a railroad from Madison (now Orange) in Orange County to tidewater at Galveston Bay. Groundbreaking was on August 27, 1857 outside Houston and real construction work began in April, 1858. Shortly thereafter some work was transferred to Beaumont and railroad construction went east and west. By this time many people started to figure out the builders of the railroad wanted to see a railroad connecting Houston with New Orleans.

In the following year rails and equipment were ordered and received. By 1860 30 miles of right-of-way was graded and 12 miles of track was laid. In late 1859 the name of the railroad was changed to the Texas and New Orleans Railroad Company. By early 1861, track was laid for 80 miles west of Beaumont and the trackage to Houston was complete.

In spring 1862 the President of the Railway, Abram M. Gentry, stated that the 110-mile line from Houston to Orange was open, but some of the track was temporary for military needs due to the Civil War. Scheduled service was operated from Houston to Orange from 1862 to mid-1863 and irregular service until early 1864. Work on the line to Louisiana continued until New Orleans was captured.

The Trinity River Bridge washed out in 1867 and the Texas and New Orleans continued to offer service between Houston and Beaumont until spring 1868, at which time the company was forced into receivership. From 1870 to 1871 limited service operated between Houston and West Liberty until the railroad was sold. The purchaser was John F. Terry of the New York banking firm of J. S. Kennedy and Company. A new Texas and New Orleans Railroad company was chartered in 1874 and Terry was named President. The T&NO was a 5 ft 6 in broad gauge line until 1876.

The first train from Houston to Orange in over a decade ran in late 1876. It was during this time the railroad was converted from broad gauge to standard gauge. In 1878 the Texas and New Orleans, Charles Morgan's Louisiana and Texas Railroad and Steamship Company, and the Louisiana Western Railroad Company reached an agreement and the line was finished from Orange to New Orleans. The Louisiana Western Extension Railroad Company was chartered in Texas to build from Orange to the Louisiana boundary and the first through train ran from Houston to New Orleans on August 30, 1880. 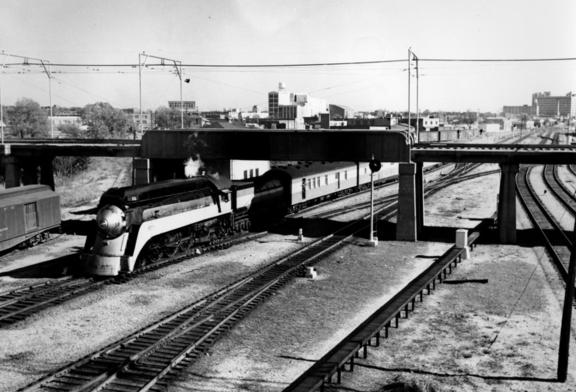 Expansion 1881-1920
In 1881 C. P. Huntington, acting for the Southern Pacific Railroad Company, bought the Texas and New Orleans as well as many other railroads in the southern United States. As a result of this acquiring of railroads by Southern Pacific, The Texas and New Orleans Railroad found itself as part of a major transcontinental route. In 1882, The T&NO made over $1,500,000 and owned 36 locomotives as well as over 1,000 pieces of rolling stock. Also in 1882 the T&NO acquired the 103-mile Sabine and East Texas Railway Company. Many more companies were merged into T&NO from 1880 to 1900. In the early years of the 20th century The Texas and New Orleans built over 160 miles of track, much of it between Cedar and Rockland, opening up a through route from Dallas to Beaumont. In 1921, the Texas State Railroad was leased in.

In 1934 all of these were merged into T&NO, making it the largest Texas railroad with 3,713 miles of road (not all in Texas). On November 1, 1961 the remaining 3,385 miles merged into the Southern Pacific and the T&NO ceased to exist.

Texas & New Orleans/Southern Pacific's the "Hustler" train No. 15 northbound, headed by Engine No. 650, a streamlined type 4-6-2 locomotive, entering Dallas Union Station on its run from Houston. The train is passing under the electric street railway viaduct (destroyed in the late 1950s) which spanned the railroad tracks and crossed over the Trinity River. Electric street cars to and from Oak Cliff and Interurban cars of the Northern Texas Traction Company and Texas Electric Railway used this double track facility.    Plummer, Roger S. [The "Hustler" entering Dallas], Photograph, ca. 1951; (http://texashistory.unt.edu/ark:/67531/metapth28881/ : accessed February 22, 2016), University of North Texas Libraries, The Portal to Texas History, http://texashistory.unt.edu; crediting Museum of the American Railroad, Dallas, Texas.