Several reminders of the Texas and Pacific remain to this day, mainly two towering buildings which help define the southern side of Fort Worth's skyline—the original station and office tower and a warehouse located immediately to the west. In 2001, the passenger platforms at the T&P station were put into use for the first time in decades as the westernmost terminus for the Trinity Railway Express, a commuter rail line connecting Fort Worth and Dallas. The warehouse still exists but there are plans to renovate it. The passenger terminal and corporate offices have been converted into luxury condominiums.

May 2, 1872 - an Act of Congress changes the name to Texas and Pacific Railway Company.

1919 - Soon after World War I, the company enters receivership.

1924 - A much improved company exits receivership under a plan that features important adjustments in its debt structure.

1925 - Lima Locomotive Works delivers 2-10-4 locomotives to the T&P. The type is nicknamed "Texas" as a result. The locomotives prove their worth for two decades, quickly moving a greatly expanded amount of traffic during WW II. The T&P eventually owns 70 of the famed 600 class units.

1933 - In the depths of the Great Depression, earnings drop to $20.2 million, but the T&P withstands the drastic deduction.

1950 - The T&P scraps more and more of its steam locomotives in favor of diesel power,  which has become a great asset to the company's western lines where water supply is a major concern.

Gauge
Under the influence of General Buell the TPRR was originally to be 3 ft 6 in gauge, but this was overturned when the state legislature passed a law requiring 4 ft 8 1⁄2 in gauge.

The most famous passenger trains operated by the T&P were the "Texas Eagles". The Texas and Pacific participated with the Missouri Pacific in the operation of the "Eagles", one of which went from Saint Louis to Dallas, Fort Worth and El Paso, and another from St. Louis to Houston and San Antonio. The streamliners featured the famous "Planetarium" dome cars. Other notable trains were the "Sunshine Special", "The Texan", and the "Louisiana Limited". In 1950, the T&P owned 35 steam-powered and 10 diesel-powered passenger locomotives, as well as 209 heavyweight passenger cars and 39 lightweight streamlined passenger cars.

Land grants
From 1873 to 1881 the Texas and Pacific built a total of 972 miles of track; as a result it was entitled to land grants totaling 12,441,600 acres . T&P, however, received land only for the construction of track east of Fort Worth. This meant the firm received only 5,173,120 acres. The State of Texas did not award the additional area because, it said, the construction had not been completed within the time required by the firm's charter. Indeed, then state Attorney General Charles A. Culberson filed suit to recover 301,893 acres on the grounds that "the road had been granted land partly on sidetracks and partly on land not subject to location." The state ultimately recovered 256,046 acres giving a net grant to the T&P of 4,917,074 acres, or 7,683 square miles. By comparison, the state of Connecticut is 5,543 square miles.

Texas Pacific Land Trust
The Texas Pacific Land Trust (NYSE: TPL) was created in 1888 in the wake of the bankruptcy of the T&P in order to provide an efficient and orderly way to sell the railway's land, receiving at the time in excess of 3.5 million acres. As of 31 December 2006 the Trust was still the largest private land owner in the State of Texas, owning the surface estate of 966,392 acres  spread across 20 counties in the western part of the state. The Trust also generates income from oil & gas royalties through its 1/128 non-participating royalty interest under 85,414 acres and 1/16 non-participating royalty interest under 386,988 acres. 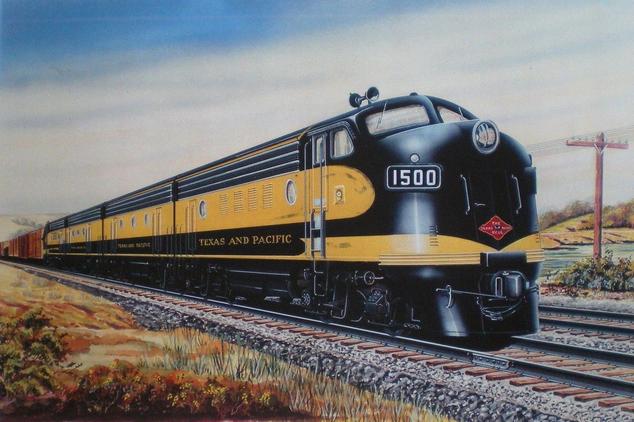 Texas and Pacific Railway
The Texas and Pacific Railway Company (reporting mark TP) was a Class I railroad that operated at its peak, 2,259 miles of road in the states of Texas, Louisiana, and Arkansas, from 1871 until 1976. Commonly known as the T&P, the line was created by a federal charter in 1871 for the purpose of building a southern transcontinental railroad between Marshall, Texas, and San Diego, California. The company's headquarters were in Marshall, Texas.

History
The T&P had a significant foothold in Texas by the mid-1880s. Construction difficulties delayed westward progress, until American financier Jay Gould acquired an interest in the railroad in 1879. The T&P never reached San Diego; instead it met the Southern Pacific at Sierra Blanca, Texas, in 1881. The Texas and Pacific's long main line stretched 1,167 miles from New Orleans in the southeast corner of Louisiana, to El Paso, in the westernmost corner of the immense state of Texas.