Toledo Peoria and Western No. 204, an Alco RS-2, idling on ready track in front of Main Shops and yards at Peoria, IL in June 1963.  Photo by Roger Puta

Toledo, Peoria and Western Railway
The Toledo, Peoria and Western Railway (reporting mark TPW) was a former Class I railroad that touted itself as "The Peoria Road". It is now a short line railroad that operates 247 miles of track from Mapleton, Illinois, through Peoria across Illinois to Logansport, Indiana, and includes a branch line between Logansport to Winamac, Indiana. TP&W has trackage rights between Galesburg, Illinois, and Peoria, between Logansport and Kokomo, Indiana, and between Reynolds, Indiana, and Lafayette, Indiana. TPW has connections with UP, BNSF, NS, CSXT, CN, CP, CERA, CIM, KBSR and T&P. The railroad is now owned by Genesee & Wyoming Inc.

The railroad's traffic comes largely from agricultural products, including both raw and processed grain products, as well as chemicals and completed tractors. The TPW hauled around 26,000 carloads in 2008.

The Pennsylvania and the Santa Fe
The Toledo, Peoria & Western Railroad was affiliated with the Pennsylvania Railroad in 1918. This meant that the western terminus for the PRR was in Keokuk, Iowa and the Santa Fe interchange at Lomax, Illinois. In 1937, the TP&W purchased six Class H-10 Northerns from the American Locomotive Company. These locomotives were given road numbers 80 through 85 and were the lightest 4-8-4 ever built for a North American railroad, weighing only 361,000 pounds. They had 69-inch drivers, 23.5 x 30 cylinders, a 250 psi boiler pressure and a tractive effort of 51,000 pounds.

In January 1960 the ATSF and PRR gained joint control (half interests) of TP&W. When Conrail was created in 1976 the TP&W acquired the former Pennsylvania Railroad trackage from Effner into Logansport, which otherwise would have been abandoned. The value of this trackage diminished in 1981 when Conrail closed the Logansport interchange. At the end of 1970 TP&W operated 239 miles of road on 323 miles of track; in 1970 it reported 520 million ton-miles of revenue freight.

In 1979 the Santa Fe reached agreement to acquire the former Pennsylvania Railroad's interest in TP&W. TP&W was merged into ATSF on December 31, 1983.

From Santa Fe to Susquehanna
The ATSF sold the Lomax-Peoria-Logansport main line on February 3, 1989 to new investors, who revived the TP&W name and making it an independent railroad again. When the parent companies of ATSF and Burlington Northern merged in 1995 TP&W was granted operating rights over BN's line between Peoria and Galesburg, Illinois.

In 1995, the New York, Susquehanna and Western Railroad acquired a 40 percent interest in the Toledo, Peoria and Western Railway (TPW), with full control going to Delaware Otsego Corporation in 1996. During this time, this regional railroad that operates in Illinois and Indiana was dispatched from the DO offices in Cooperstown, New York. Some TPW locomotives were painted in the NYSW's distinctive yellow-and-black paint scheme during this time. In 1998, TP&W had revenues of approximately $13.4 million and moved over 59,000 freight carloads and intermodal units. It was acquired by RailAmerica in 1999, and it is still operated as TP&W. The Genesee & Wyoming acquired RailAmerica in late 2012, gaining ownership of the TP&W.

Keokuk Junction Railway purchases
The Keokuk Junction Railway now owns parts of the old TP&W line, including the Western Illinois & Keokuk section of TP&W (Fulton, McDonough and Hancock counties in Illinois). In December 1986, KJRY purchased 33.5 miles of former TP&W trackage (then owned by the Santa Fe Railroad) from Keokuk, Iowa, and Warsaw, Illinois, to La Harpe, Illinois. KJRY's feeder line application with the Surface Transportation Board (STB) to acquire the assets of the west end of the new TP&W was granted on 2004-10-28. KJRY completed the acquisition on 2005-02-11, adding 76 miles from LaHarpe to Peoria, the old TP&W main line west of Peoria. 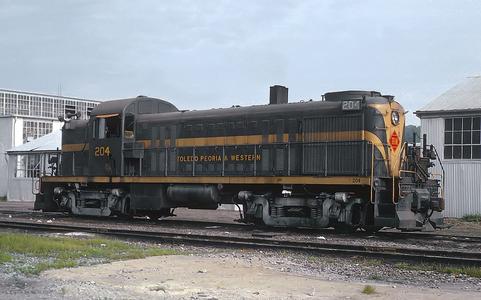