The Utah Railway (reporting mark UTAH) was formerly a Class I railroad that served the Utah coal fields with 111 miles of road from Provo, UT to Hiawatha, Utah. The freight only “Utah Coal Route” was owned by United States Smelting, Refining and Mining Company. It is now a Class III railroad operating in both Utah and Colorado, and is presently owned by Genesee & Wyoming Inc.

Incorporated in January of 1912 as the Utah Coal Railway, the name was shortened to Utah Railway in May of the same year. Founded to haul coal from the company mines to Provo, Utah, the  line was a direct result of the company’s dissatisfaction with the poor service (and also the route taken) by the local Denver and Rio Grande Railroad. The Utah had a reputation for owning the only the best, most modern equipment; when built, its large "Santa Fe" (2-10-2) and "Mallet" (2-6-6-2) steam locomotives sported automatic stokers, which was a totally new invention at the time. This convenience had the effect of drawing many of the D&RGW’s firemen from their Utah Division to the Utah Railway in 1917. Also, the Utah was the first railroad to equip its air brakes with fourteen-pound tension springs (instead of the usual seven-pound springs). The Utah was also one of the earliest coal haulers to use diesel-electric locomotives, and adopted automation technologies early, including the use of the flashing rear end device (instead of a caboose). The Utah Railway's huge roster of freight cars consisted of fifteen flatcars and about 2,000 drop-bottom gondolas jointly owned with the San Pedro, Los Angeles & Salt Lake (later LA&SL) Railroad, and painted with "Utah Coal Route" lettering and UCR reporting marks. These gondolas were known to the railroad's employees as "Battleships". In 1950, the Utah was still using all steam locomotives, of which it owned a fleet of 13. Later parent company Mueller Industries, a copper product manufacturer, sold the Utah Railway in 2002 to Genesee & Wyoming Inc., a railroad holding company. The company now operates over 423 miles of track between Grand Junction, Colorado, and Provo, Utah, of which 45 miles are owned, and the remainder operated under agreements with BNSF Railway and Union Pacific. The company still hauls a huge amount of coal; of the 90,000 carloads carried every year, over two thirds are coal. The Utah Railway also owns a subsidiary railroad, the Salt Lake City Southern Railroad, that services over 30 customers on more than 25 miles of track between Salt Lake City and Draper, Utah.

Today's Utah Railway operates over 423 miles of track between Grand Junction, Colorado, and Provo, Utah, of which 45 miles are owned, and the remainder operated under agreements with BNSF Railway and Union Pacific. The company still hauls a significant amount of coal; of the 90,000 carloads hauled each year, over two thirds are coal. The Utah Railway also owns a subsidiary railroad, the Salt Lake City Southern Railroad, serving over 30 customers on over 25 miles (40 km) of track between Salt Lake City and Draper, Utah. In addition, switching services are provided in Ogden and elsewhere.

Logo
The earliest logo was simply the words "Utah Railway Company", spelled out on the locomotives and cabooses, and "Utah Coal Route" on the drop-bottom gondolas. On paper, however, the logo for many years was a black circle with a white background. The wording and image in these circular logos changed over the years. The 1948 logo included the words "Utah Railway" surrounding a gondola with the initials "U.C.R.". The 1999 logo was an oval with an image of an SD diesel locomotive and the words "Utah Railway: Since 1912". In later years the symbol of the Utah Railway Company was the beehive, which is also the Utah state symbol. Normally, GWI alters the corporate logos of its acquisitions to match the parent company's logo, but in a nod to tradition, the beehive was retained within a logo similar to the parent company's design. 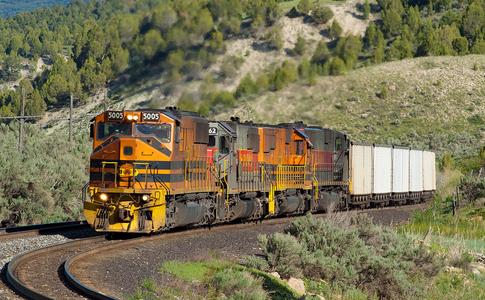