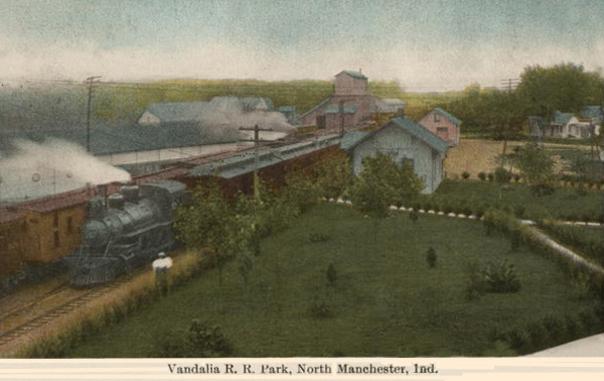 In 1917 the line was acquired by the Pittsburgh, Cincinnati, Chicago and St. Louis Railroad giving the Pennsylvania Railroad a direct route from New York City to St. Louis. In 1968 PRR merged with NYC to become Penn Central and in 1976 becoming part of Conrail. Much of the North-South line was abandoned with the Conrail formation but parts of the East-West line survive as part of CSX Transportation.

Route
The East-West line ran from Indianapolis to St. Louis with a major branch connecting Decatur, Illinois and Peoria, Illinois. The line was double-tracked for much of its length serving the coal region of southern Illinois and as a passenger route for the Pennsylvania Railroad’s Blue Ribbon named trains The St Louisan, the Jeffersonian, and the Spirit of St. Louis.

The North-South route from Logansport, IN, to South Bend, IN. Logansport was a PRR hub, with six branch lines radiating in many directions. Logansport also featured a yard and engine terminal. From Logansport, the line proceeded northward intersecting every major east-west trunk line including the PRR's main east-west route and PRR's "panhandle" route. Upon reaching South Bend, the line proceeded northward through an industrial corridor toward the Studebaker plant to a depot just short of South Bend Union Station. Because the New York Central (NYC) trackage was elevated, interchange with NYC and tenant Grand Trunk Western (GTW) was indirect via a west-routed branch that reached the Studebaker plant railroad, New Jersey, Indiana, and Illinois (NJI&I) subsidiary of the Wabash Railroad, GTW, and NYC's Kankakee Belt Railroad subsidiary. PRR maintained few facilities other than the depot in town as there were no other connecting PRR lines in South Bend.

Equipment
The Vandalia Railroad was a PRR subsidiary for most of the twentieth century. PRR was known for equipment standardization and as such, all properties and subsidiaries operated with standardized PRR equipment. No known photographs of Vandalia-lettered equipment exist.

Traffic
Freight traffic was the primary use of the Vandalia Railroad. Studebaker loaded trucks for shipment south. Passenger trains were operated, including football specials for the University of Notre Dame. The university is located a few miles north of the station.

Abandonment
Despite the shutdown of most Studebaker operations in South Bend, abandonment was delayed until the Conrail consolidation. At that time, Conrail had three routes to/through South Bend and the Vandalia Railroad was deemed redundant. It has been abandoned piecemeal from the city border northward, with online industries served from trains based on the former NYC territory.

The depot in South Bend still stands as a business. The tracks to the South still stand to Ewing Street, but are not in use. The tracks west to the Kankakee Belt connection still stand and are rarely used.