Vermont Railway
The Vermont Railway (reporting mark VTR) is a shortline railroad in Vermont and eastern New York, operating much of the former Rutland Railway. It is the main part of the Vermont Rail System, which also owns the Green Mountain Railroad, the Rutland's branch to Bellows Falls. The trackage is owned by the Vermont Agency of Transportation except in New York, where VTR operates a line owned by the Boston and Maine Corporation.

History
The Rutland Railway was the only north-south line through western Vermont. A strike shut it down on September 25, 1961. The Government of Vermont purchased the main line south of Burlington, as well as a branch to Bennington, 128.6 miles total, and the new Vermont Railway, incorporated on Oct. 25, 1963, began operations on January 6, 1964. The company's first president was Jay Wulfson, who came from the Middletown and New Jersey Railroad.

During the early years of the Vermont Railway, a great deal of energy and money was expended replacing the old locomotives and rolling stock the railroad had inherited from the Rutland, buying several locomotives, both new and used, as well as leasing several hundred freight cars. The railroad continued to expand, entering the intermodal business in 1965, and acquiring the Clarendon and Pittsford Railroad in 1972, which gave VTR access to a major limestone plant near Florence, VT. VTR retained the Clarendon and Pittsford name as a separate legal entity operating the acquired trackage. In the late 1970s, despite the deaths of several senior officials, including Wulfson, the railroad earned more than $2 million in revenues for the first time, although net earnings remained much lower, at about $20,000 a year, all of which was put back towards improving the railroad.

In 1982, VTR paid back the State of Vermont for the trackage the State bought in 1964 to allow VTR to begin operations. A year later, VTR bought 23.7 miles of track between Rutland and Whitehall, New York from the Delaware and Hudson Railroad and assigned it to its Clarendon and Pittsford subsidiary. The track was severely deteriorated at the time of purchase, with track speeds as low as 6 miles per hour over the entire line. During the first years after the purchase, a major rehabilitation project was begun, upgrading the roadbed as well as the track and ties. Since the line was brought up to better standards, Whitehall has become a major interchange point between VTR and the D&H (now Canadian Pacific after their acquisition of the D&H).

In 1997, the Vermont Railway purchased the Green Mountain Railroad, which ran 52.2 miles from Rutland to Bellows Falls. This led to the formation of an umbrella company, named the Vermont Rail System, which owned both railroads, as well as several other shortlines in Vermont and New York.

VTR planned to construct a new 3.3-mile spur line in Middlebury, Vermont to serve a quarry. In early 2011, the company created a new subsidiary railroad called the Otter Creek Railroad to purchase land and construct trackage in preparation for construction to begin in early 2013, with a late 2014 completion date. The quarry cancelled the project in August 2012 because it was no longer economically viable.

Traffic
The Vermont Railway moves a wide variety of freight, as well as playing host to an Amtrak passenger train, the Ethan Allen Express. VTR moves large amounts of stone products from quarries in western Vermont, largely limestone in the form of slurry from OMYA mines north of Rutland. VTR also moves large amounts of petroleum products into Vermont, including unit trains of fuel oil from Albany, New York, to Burlington.

Locomotive Fleet
As of August 2015, the Vermont Railway's fleet consisted of: 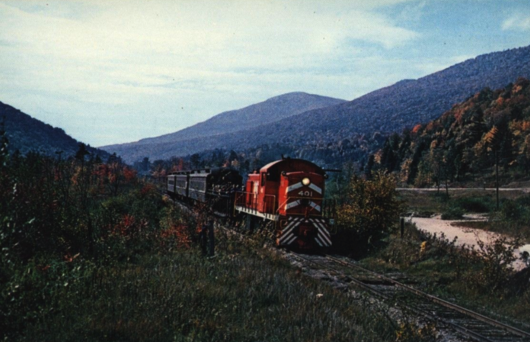