The Virginian Railway operated over more modern alignments than did the C&O and the N&W, and the VGN’s track had been constructed to the highest standards. The VGN provided major competition for coal traffic to the C&O and the N&W. The 600-mile VGN followed H. H. Rogers' philosophy throughout its profitable history, and earned the nickname "Richest Little Railroad in the World." It operated some of the largest and most powerful steam, electric, and later, diesel locomotives. The VGN had brought electrification to 134 miles of its line between 1922 and 1926 (at a cost fifteen million dollars), and operated its own power plant at Narrows, Virginia. The VGN shared electrical power with the N&W from 1925 to 1950, when N&W terminated its own electrified segment through the Elkhorn Tunnel and the Great Flat Top Mountain area. After the N&W-VGN merged, the VGN track was finally de-electrified in 1962. In 1950, operations outside of the Virginian’s electrified area were entirely steam. 14,500-ton trains pulled by massive 2-6-6-6 type, single expansion, articulated Allegheny locomotives rolled over the Virginian’s eastern half, and seven former N&W (and later Santa Fe) boomer 2-8-8-2’s pulled coal drags on mine runs. Also in 1950, the VGN purchased fifteen modern 0-8-0 switchers from the C&O. The VGN operated fast freights between the New York Central (NYC) yard at Dickinson, West Virginia, and Norfolk, using five modern 2-8-4 Berkshire steam locomotives. Daily passenger trains operated in two directions from Roanoke, providing passenger, mail and express service for the towns along the line. At this time, the VGN equipment roster included 107 steam locomotives (7 of which were passenger locomotives), 44 electric freight locomotives, 15,036 freight cars (100 of which were cabooses), 10 passenger cars, and 175 pieces of company service (m-o-w) equipment. There were notably no diesel locomotives on the VGN roster in 1950.

A Map of the Virginian Railway.

When the Virginian Railway was finally merged into the Norfolk and Western in 1959, it is commonly believed that the Interstate Commerce Commission (ICC) approval set the table for a merger movement and a modernization of the entire US railroad industry and in 1964, another major event occurred. The Wabash; the Nickel Plate Road; the Pittsburgh and West Virginia Railway; and the Akron, Canton and Youngstown Railroad were all merged into the system in one of the most intricate consolidations of the period. This merger, enhanced by a more direct route to Chicago, Illinois in 1976, positioned the Norfolk and Western as a significant Midwestern railroad, and provided direct single-line service between the Atlantic Ocean on one side and the Great Lakes and Mississippi River on the other. 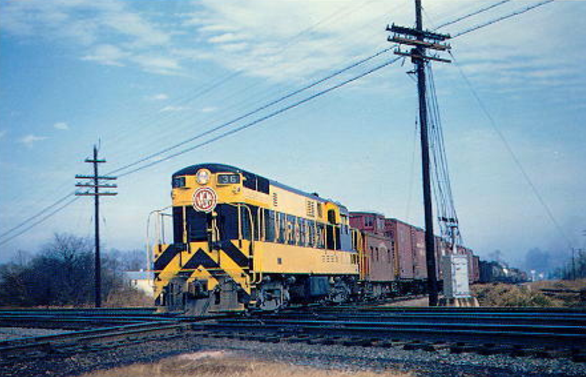 Photo of the Virginian Railway's Alco-Westinghouse EL3A being christened, September 25, 1925. 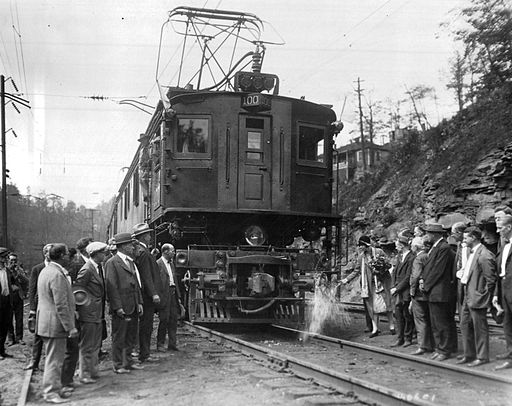 The Virginian Railway Company (VGN) was a Class I railroad that operated on 600 miles in the states of Virginia and West Virginia from 1907 until 1959, when it was merged into the Norfolk and Western (N&W). Known as “The Richest Little Railroad in the World,” the railroad was a super carrier from the rich coal mines of West Virginia to the port of Norfolk.

The VGN was designed, constructed, and financed by William Nelson Page and Henry Huttleston “H. H.” Rogers. Page had helped with the marvelous engineering and construction of the Chesapeake & Ohio Railway (C&O) through the West Virginia mountains and H. H. Rogers was a millionaire and principal of Standard Oil before they formed their partnership in the early 1900s. At first, their venture was a single 80-mile-long short line railroad. After the railroad was unable to establish favorable rates to interchange coal traffic with the big railroads (who shut them out through complicity), the project was expanded. Rogers appeared to be a silent partner in the early going, and no credibility was given to Page by the big railroads. Nevertheless, the partners designed and constructed a "Mountains to Sea" railroad from the coal fields of southern West Virginia to the port near Norfolk at Sewell's Point in the harbor of Hampton Roads. This was done right under the noses of the pre-existing and much larger C&O and N&W railroads by creating a pair of small intrastate railroads, the Deepwater Railway, in West Virginia, and the Tidewater Railway in Virginia. Once right-of-way and land acquisitions had been secured, the two small railroads merged in 1907 to form the Virginian Railway. Financed almost entirely from H. H. Rogers' personal resources and engineered by Page, the Virginian was built through a policy of investing in the best route and equipment on initial selection and purchase to keep operating costs as low as possible. When Mark Twain spoke at the dedication of the Virginian Railway in Norfolk, Virginia, sadly, it was just six weeks before H. H. Rogers’ death in May of 1909, after making his sole inspection trip on the recently finished railroad. In June of that same year, Booker T. Washington made a whistle-stop speaking tour on the Virginian, traveling in Rogers' private car, “Dixie,” and later revealed that the philanthropic Rogers had been involved in funding many small country schools and institutions of higher education in the South for the advancement of Blacks.