Waterloo Central Railway
The Waterloo Central Railway (WCR) is a non-profit organization that is owned and operated by the Southern Ontario Locomotive Restoration Society (SOLRS) in Canada. In May 2007, SOLRS received joint approval from the Region of Waterloo and the City of Waterloo to run trains from Waterloo to St. Jacobs and potentially as far north as Elmira. On a typical operating day, the train runs three times a day on Tuesdays (June to August), Thursdays (May to October) and Saturday (April to October). In 2015, the railway lost regular running rights south of Northfield Drive to make way for the Ion light rail project. All Market Train service now runs between St. Jacobs Farmers' Market, the Village of St. Jacobs, and Elmira, Ontario. The train also runs on certain special events including the Maple Syrup Festival in early April.

Operations and Milestones
Running Rights
The WCR operates on the former Canadian National Waterloo Spur now owned by the Region of Waterloo, which connects Elmira, St. Jacobs and Waterloo toKitchener, Ontario by rail. Through an agreement with the Region of Waterloo, the WCR operates passenger service in daytime hours, and the Goderich–Exeter Railway operates freight service in evening hours. From 2007 to 2014, the WCR leased space in the City of Waterloo Visitor and Heritage Information Centre which was formerly owned by the Waterloo-St. Jacobs Railway. As of 2015, the WCR no longer operates south of Northfield Drive.

2007 to 2014
The inaugural season began in 2007 with diesel-hauled service serving Waterloo, the St. Jacobs Market and the Village of St. Jacobs on Market Days. Ex-Essex Terminal Railway Steam Engine Number 9 was moved along with most of the SOLRS equipment from St. Thomas to Waterloo Region in the fall. Santa Claus trains begin this season as well. The 2008 season added annual excursions to service the Elmira Maple Syrup Festival. In 2010 a restoration and service shop in St. Jacobs allowed for the reactivation of the restoration programme. Ex. ETR No. 9 was stored under cover for the first time since it arrived from St. Thomas. Ex. CN 79482 caboose was restored as WCR 482 and returned to service. Ex. CNR 50845 Burro Crane and steam locomotive 124 were relocated to St. Jacobs.

The Southern Ontario Locomotive Restoration Society also runs a Rail School to teach people certain aspects of train operation. On completion of the full hours of training, graduates can receive Ministry of Transportation Certification as Engineer, Conductor, or Safety Crew.

Effective for the 2018 season, the railway's southern terminus will be Northfield Drive in Waterloo, just north of the Ion system's Northfield station.

Southern Ontario Locomotive Restoration Society
The Southern Ontario Locomotive Restoration Society (SOLRS) is the parent organization that operates the Waterloo Central Railway. SOLRS became a registered Canadian charity in 1988 and maintains that status today. The mandate of SOLRS is to preserve, to restore and to operate vintage railway equipment for the education and enjoyment of the public and to present the cultural heritage in a new and more meaningful way to generations past, present and future.

Rolling stock
SOLRS has a variety of heritage cars in active service and others that await restoration. When SOLRS takes extended tours, they also bring a baggage car, two air-dump hopper cars, two boxcars and a tank car with them.

Former Motive Power and Rolling Stock
Engine 1518, a GE 95 ton locomotive built in 1956. The engine was donated by Praxair Inc. of Tonawanda, New York. This engine has since been scrapped as restoration was not feasible.

Restoration Shop
A restoration and repair shop in the Village of St. Jacobs was completed in mid-2010. 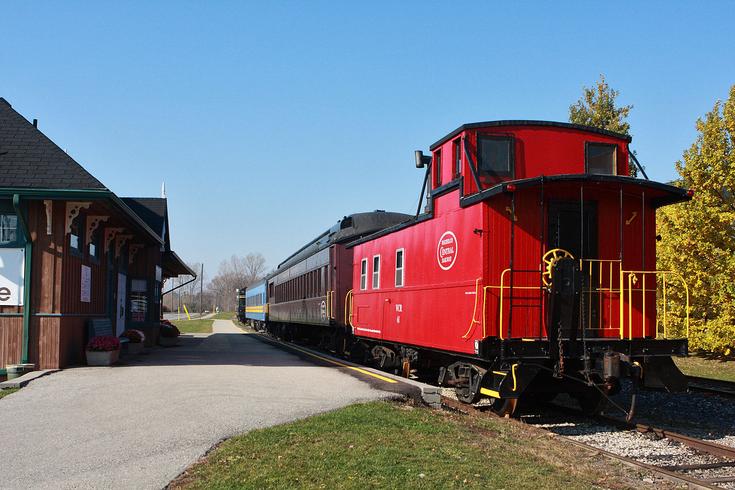