Western Maryland Railway
The Western Maryland Railway (reporting mark WM) was an 835 mile Class I railroad operating in Maryland, West Virginia, and Pennsylvania from 1852 until 1983. It was primarily a coal hauling and freight railroad, with a small passenger train operation. The WM became part of the Chessie System in 1973, although it continued independent operations until May 1975 after which time many of its lines were abandoned in favor of parallel Baltimore and Ohio Railroad lines. In 1983 it was fully merged into the Baltimore & Ohio Railroad, which later was also merged into the Chessie System with the former Chesapeake and Ohio Railroad, which is now CSX Transportation. The WM's headquarters were in Baltimore, Maryland.

History
Main line: Baltimore to Hagerstown
The original main line began with the chartering of the Baltimore, Carroll and Frederick Railroad in 1852, with the intent of building a rail line from Baltimore west to Washington County, Maryland. The Maryland General Assembly changed the name of the company to the Western Maryland Rail Road Company in 1853, and construction began from Owings Mills in 1857. An existing Northern Central Railway branch line terminating at Owings Mills was used to connect into Baltimore. The railroad was completed to Westminster in 1861 and Union Bridge in 1862. Further expansion was delayed because of the Civil War. Westward construction resumed in 1868, and the line was completed to Hagerstown in 1872. This section became the East Subdivision. The company's first major car shops were established at Union Bridge.

In 1873 the WM built its own line from Owings Mills to Fulton Junction in Baltimore, and obtained trackage rights from the Baltimore and Potomac Railroad (B&P) for the remaining two miles of the route eastward to Union Station (later called Penn Station). It built a branch east of Union Station to Hillen Station, which opened in 1876 and became the company headquarters. The WM built a connection from Hagerstown to Williamsport, in order to access coal traffic from the Chesapeake and Ohio Canal.

Extensions in Maryland and Pennsylvania
Under the leadership of company president John Mifflin Hood, the railway made its first extension into Pennsylvania by leasing a line from Edgemont, Maryland, to Waynesboro and Shippensburg. This line became the Lurgan Subdivision and was leased from the Baltimore and Cumberland Valley Railroad in 1881, and was connected to the Harrisburg and Potomac Railroad in 1886.

A second route into Pennsylvania, the Hanover Subdivision, was acquired by the WM when it gained control of the Baltimore and Hanover Railroad, and the Gettysburg Railroad, in late 1886. This line connected to the WM main at Emory Grove, proceeded north to Hanover and Gettysburg, then southwest to connect again to the WM at Highfield, Maryland, near the Pennsylvania border. A branch from Porters to York, Pennsylvania was completed in 1893; this became the York Subdivision.

The WM established a connection with the Baltimore and Ohio Railroad (B&O) in 1892 with the opening of the Potomac Valley Rail Road (controlled by WM) between Williamsport and Big Pool, Maryland. This connection brought a major increase in through-freight traffic. Construction of an extension from Hagerstown to Cumberland began in 1903 and completed in 1906. This became the West Subdivision. To service the expanded system, the WM built a major shop complex at Hagerstown in 1909, with a roundhouse, machine shops and related facilities. Rail yards at Hagerstown were also expanded.

Expansion Plans
The Fuller Syndicate, led by George Gould, purchased a controlling interest in the WM in 1902 and made plans for westward expansion of the system.

In 1904 the WM completed construction of a large marine terminal at Port Covington, on the Patapsco River in Baltimore, to support the Gould organization's expansion plans. The terminal facilities included coal, grain and merchandise piers, overhead cranes, 11 rail yards, warehouses, a roundhouse, a turntable and a machine shop. In the 1920s rotary dumpers for coal and coke were installed, and a large grain elevator.

In 1907 the syndicate acquired several railroad companies, including the George's Creek and Cumberland Railroad (GC&C), which had built a line west through the Cumberland Narrows, and then south to Lonaconing, Maryland. Using the portion of the line through the Narrows, the Connellsville Extension was built west from Cumberland to Connellsville, Pennsylvania, beginning in 1910, and it was completed in 1912. At Connellsville the WM connected with the Pittsburgh and Lake Erie Railroad (P&LE). In 1915 the WM obtained trackage rights on a B&O line from Bowest Junction (2 miles south of Connellsville) to Chiefton, West Virginia, which provided access to coal mines in the area west of Fairmont, West Virginia.

The GC&C line provided the WM with access to mines in the Georges Creek Valley. In 1927 the WM abandoned some of the GC&C track and accessed additional mines in the area through trackage rights on the Cumberland and Pennsylvania Railroad (C&P). In 1944 the WM purchased the C&P, and formally merged the operations in 1953.

Although never a giant, the Connellsville subdivision of WM handled through Midwest fast freight traffic and coal from company-owned mines near Fairmont and Somerset, Pennsylvania.

West Virginia coal country
The West Virginia Central and Pittsburg Railway (WVC&P) began as a narrow gauge line in 1880, its name and gauge changed in 1881 and in the ensuing years it opened a huge swath of timber and coal territory in the Allegheny Highlands of West Virginia. The railroad was directly responsible for the creation of such towns as Davis, Thomas, and Parsons.

In the large valley near the mouth of Leading Creek and the Tygart Valley River, the WVC&P constructed the city of Elkins (named after investor Stephen Benton Elkins). Elkins was home to a large rail yard for the railroad and served as the hub of Western Maryland and Chessie System operations in the region well into the 1980s.

The WVC&P established the Coal and Iron Railway (C&I) in 1899 to reach logging operations and a connection with the Chesapeake and Ohio Railway (C&O). The route left Elkins and the Tygart Valley River drainage by way of a tunnel under Cheat Mountain, followed the Shavers Fork river upstream and then the West Fork Greenbrier River down from its headwaters to Durbin in Pocahontas County, where it connected with the C&O Greenbrier Division. Construction to Durbin was complete by 1903. With the acquisition of the WVC&P in 1905, the C&I became part of WM and this line became the Durbin Subdivision.

In 1927 the WM purchased the Greenbrier, Cheat and Elk Railroad, which ran from Cheat Junction, on the Durbin sub, to Bergoo. This line became the GC&E Subdivision. In 1929, WM's purchase of a line from the West Virginia Midland Railway extended the GC&E sub southward to Webster Springs. While these lines were originally built as logging railroads, the WM also used them for coal operations.

Twentieth century operations
The Fuller Syndicate attempted to assemble its own transcontinental railroad system beginning around 1902, by acquiring various rail lines. It faced stiff competition from the Pennsylvania Railroad (PRR), the B&O and others, and became financially overextended in its expansion plans. As a result, the WM entered receivership in 1908. A new corporation, the Western Maryland Railway Company, was formed and purchased the WM assets in 1909, and the receivership ended in 1910.

In 1931, the Pittsburgh and West Virginia Railway (P&WV) reached Connellsville to connect with the WM. The connection enabled the formation of the Alphabet Route, a partnership involving the WM, P&WV and six other railroads that provided competition with larger railroads including the PRR. Today the P&WV is leased by the Wheeling and Lake Erie Railway.

Dissolution
Passenger service on the WM began in 1859. Revenue passenger-miles declined from 26 million in 1925 to 2 million in 1956, and passenger service ended in 1959. In 1964 the C&O and the B&O jointly filed for permission to acquire control of the Western Maryland Railway with the Interstate Commerce Commission (ICC). The ICC approved the acquisition in 1968.[8]:364 In 1973, as part of the Chessie System, Western Maryland ownership went to C&O and it was operated by the B&O. The B&O itself merged with the C&O in 1987, which itself became part of CSX Transportation.

Legacy
Much of the original WM west of Big Pool has been abandoned including the 2,375-foot summit of the Allegheny Mountains and the Eastern Continental Divide near Deal, Pennsylvania. In addition to CSX, portions of the former WM are now operated by Durbin & Greenbrier Valley Railroad, the Maryland Midland Railway (MMID), Western Maryland Scenic Railroad and York Railway. Other portions are now rail trails. A portion of the former WM roadbed in Baltimore is now used by the Baltimore Metro Subway going northwest from downtown to Owings Mills, Maryland in Baltimore County.

Williamsport on the C&O Canal was the WM's western terminus from 1873, and its principal source of coal traffic until the main line was extended to Cumberland in 1906.

At the peak in the early 20th century, WM operated the following lines:

A postcard photo of a pair of Western Maryland Alcos on a special excursion train. (CS Archive) 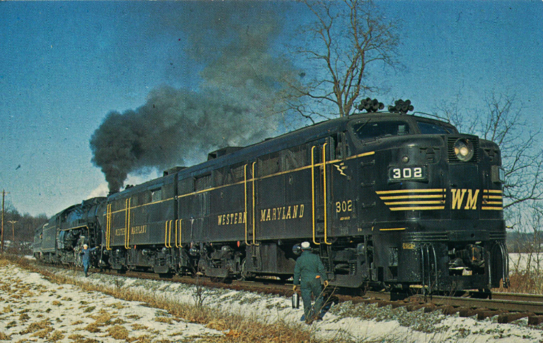