Western Railway of Alabama
The Western Railway of Alabama (WRA) also seen as "WofA" is a former Class I railroad that was created as the Western Railroad of Alabama by the owners of the Montgomery & West Point Railroad (M&WP) in 1860. It was built to further the M&WP's development West from Montgomery, Alabama to Selma, Alabama. When the line was constructed in 1870, the M&WP was merged into the WRA, creating a line from Selma to West Point, Georgia. It served Auburn, Alabama and connected in Opelika, Alabama to the Central of Georgia line from Columbus, Georgia to Birmingham, Alabama. Although it was partially owned by the Central of Georgia around the turn from the nineteenth to the twentieth century, it did not end up being owned by Norfolk Southern when that company came into existence due to the merger of the CofG's parent, the Southern Railway, and the Norfolk & Western Railway.

The Atlanta and West Point Rail Road Company owned 93 miles of line in 1950, and was jointly operated with The Western Railway of Alabama (133 route miles) as both lines were subsidiaries of the Atlantic Coast Line and the Louisville and Nashville. The A&WP extended from Atlanta, Georgia to West Point, and the WofA from West Point to Montgomery, Alabama, and Selma, Alabama. Together with the Georgia Railroad, the an east t to west route was provided from Augusta to Selma that totaled 396 miles. From Atlanta to Montgomery, the two lines formed the West Point Route. 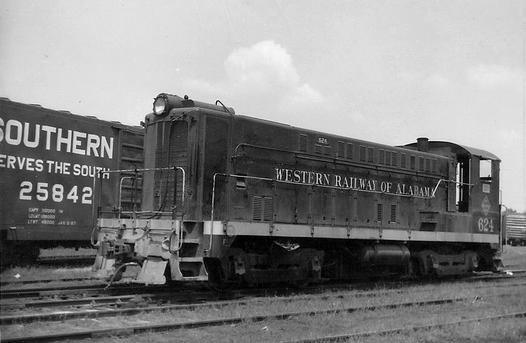 In the 1980s, the line and its sister railroads, the Atlanta & West Point Railroad and the Georgia Railroad, became part of the Family Lines System, along with the Seaboard Coast Line Railroad, the Louisville & Nashville Railroad and the Clinchfield Railroad. The lines were all later renamed Seaboard System Railroad, which in 1986 merged with the Chessie System to become CSX Transportation.

Western Railway of Alabama No. 624.