An EMD FP7 leads the California Zephyr east through Altamont Pass in 1970.  Photo by Drew Jacksich.

History
The original Western Pacific Railroad was established in 1865 to build the westernmost portion of the Transcontinental Railroad between San Jose, California (later Oakland, California), and Sacramento, California. This company was absorbed into the Central Pacific Railroad in 1870.

The second company to use the name Western Pacific Railroad was founded in 1903. Under the direction of George Jay Gould I, the Western Pacific was founded to provide a standard gauge track connection to the Pacific Coast for his aspiring Gould transcontinental system. The construction was financed by the Denver and Rio Grande Western Railroad, a company in the Gould system, which lost access to California due to the attempted acquisition of the Southern Pacific Railroad by the Rio Grande's main rival, the Union Pacific Railroad. The Western Pacific Railroad acquired the Alameda and San Joaquin Railroad and began construction on what would become the Feather River Route. In 1909 it became the last major railroad completed into California. It used 85-lb rail on untreated ties, with no tie plates except on curves over one degree; in 1935 more than half of the main line still had its original rail, most of it having carried 150 million gross tons.

In 1931 Western Pacific opened a main line north from the Feather River Canyon to the Great Northern Railway in northern California. This route, the "Highline", joined the Oakland – Salt Lake City main line at the Keddie Wye, a unique combination of two steel trestles and a tunnel forming a triangle of intersecting track. In 1935, the railroad went bankrupt because of decreased freight and passenger traffic caused by the Depression and had to be reorganized.

WP attracted rail enthusiasts from around the world. It operated the California Zephyr passenger train with the Denver and Rio Grande Western Railroad and the Chicago, Burlington and Quincy Railroad. The WP handled the "Silver Lady" from Oakland, California, to Salt Lake City, Utah from 1949–1970. The Western Pacific owned several connecting short-line railroads. The largest was the Sacramento Northern Railway, which once reached from San Francisco to Chico, California. Others included the Tidewater Southern Railway, the Central California Traction, the Indian Valley Railroad and the Deep Creek Railroad. At the end of 1970 WP operated 1,187 miles of road and 1,980 miles of track, not including its Sacramento Northern and Tidewater Southern subsidiaries.

Innovations and improvements
Since it competed with the entrenched and much larger Southern Pacific Railroad, the WP became a company known for its innovation and for wringing every dollar out of an investment. It was the first large railroad in the West to eliminate steam locomotives in favor of diesels, then kept some of these early diesels running in regular service long after they had been retired elsewhere. WP also rebuilt many well worn diesels (30) by sending them to Boise, Idaho rebuilder Morrison-Knudsen (M-K rebuild). It embraced computerized dispatching, concrete railroad ties and innovative equipment to protect customer shipments. The WP bought new cabooses in the 1960s to replace older wood type cabooses which they scrapped or sent to subsidiaries Sacramento Northern or Tidewater Southern. The WP also purchased new freight cars: auto parts boxcars, covered hoppers, various types of single- and double-door boxcars, bulkhead flatcars, centerbeam flatcars, and also rebuilding outmoded freight cars (such as 40-foot) open gondolas for chip-hauling and service). WP was one of the first to run solid trains of COFC (Container On Flat Car) traffic from Oakland APL American Presidents lines to points east via Union Pacific. WP had auto parts on special trains to the Ford Motor Company plant in Milpitas, California, with a connection from DRGW or UP at Salt Lake City. WP had yards in Stockton, Milpitas, Oroville, Portola, Elko, Oakland, Keddie, Winnemucca, and Salt Lake City. 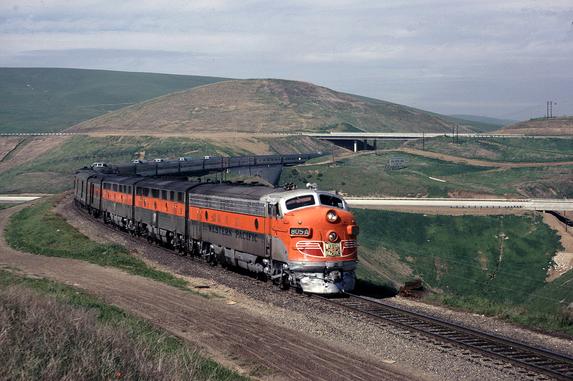