History
Map of a proposed 2 ft (610 mm) gauge railroad that would have linked the WW&F with the Sandy River Railroad. The Franklin, Somerset and Kennebec Railway was chartered in 1897; construction began in 1901 on the northern portion of the line from Farmington to New Sharon. The line was never completed because the Maine Central Railroad objected to a connection between the two narrow gauge lines on their property in Farmington.

The line began operating to Weeks Mills on February 20, 1895, as the Wiscasset and Quebec Railroad. The line was reorganized in 1901 as the Wiscasset, Waterville and Farmington Railway following the inability to negotiate a crossing of the Belfast and Moosehead Lake Railroad near Burnham Junction. The reorganized WW&F completed a branch line from Weeks Mills to the Kennebec River at Winslow but failed to negotiate a connection with the Sandy River Railroad at Farmington, and therefore never reached Quebec.

in the late 1920s, the railroad began to struggle, thanks to competition from roads. It was purchased by Frank Winter, a businessman with lumber interests in Palermo. He had also bought two cargo schooners, which he proposed would carry coal north from Boston and return south with lumber, while the railroad would transport coal and lumber between Wiscasset and interior points in Maine. On June 15, 1933, as a result of a locomotive derailment, operations ceased and this business venture never came to fruition. Winter died in 1936. Most of the railroad was scrapped, while the schooners were abandoned beside the railroad wharf in Wiscasset.

Main Line geography 1895-1933
Milepost 0: Wiscasset - Transfer yard largely built on pilings over the Sheepscot River estuary including a wharf, passing siding, interchange tracks with the standard gauge Maine Central Railroad and spurs serving a creamery and a grain warehouse. North of the transfer yard was the diamond crossing of the Maine Central Railroad with a wooden platform connecting separate station buildings for the two railroads. A 3-stall engine house and turntable, a long coal shed, a large 3-track car shop, two storage sidings, and a water tank were north of the Maine Central diamond.

Milepost 12.3: "Iron Bridge" The most impressive bridge on the line carried the rails over the Sheepscot River. The railroad was within a relatively steeply incised portion of the Sheepscot River valley between Head Tide and Whitefield. The through truss bridge had previously been used as part of an early Maine Central Railroad bridge over the Kennebec River at  Waterville, Maine.

Milepost 20.4: Cooper's Mills - Agent's station with a passing siding and a southbound spur serving a potato warehouse. The original station was a covered design with doors at either end to allow the train to pass through; but this was replaced in the early 1900s with a newer design similar to those constructed on the Winslow branch. There was a covered water tank south of the station.

Milepost 28.2: Weeks Mills - Agent's station building of standard design with a separate shed-roofed freight house, a covered water tank, one or two passing sidings, a wye for the branch to Winslow, and two southbound spurs for a potato warehouse and a cannery.

Milepost 43.5: Albion - Agent's station building of standard design was subsequently modified to add a second story with living quarters. Several southbound spurs served a cannery, a sawmill, a tannery, and two potato warehouses. A turntable and single-stall engine house were near the station, and there was a covered water tank about a half-mile south of the station.

Branch Line geography 1902-1916
Milepost 31.5: South China - Agent's station building of newer design with a northbound spur serving a potato warehouse. There was a covered water tank about one-quarter mile south of the station.

Milepost 42.7: Winslow - Agent's station building of newer design with a southbound spur. There was also a turntable and enginehouse for the decade this point served as the primary northern terminus of the railroad. Rails were removed from the Winslow end of the branch in 1912, but the railroad provided freight service as far as North Vassalboro for a few more years.

The Wiscasset car shop completed a number of rebuilding projects starting with conversion of six of the original flatcars to boxcars during the first year of railroad operations. The shop then rebuilt one end of smoking car No. 4 into a baggage  compartment. After the smoking car burst into flame in 1904, its trucks were used under the caboose. The caboose was renumbered from 26 to 301 after its cupola was removed. Excursion car No. 7 was converted to a replacement combination RPO-smoking car in 1906. The 28-foot gondolas were rebuilt as flatcars when the 30-foot gondolas were delivered, and the 30-foot gondolas were rebuilt as simple flatcars within a year. Box cars Nos. 65, 72 and 73 were rebuilt with hinged doors, insulated walls, and 2 windows for use as cream cars carrying an attendant to load and record milk cans. As the 28-foot boxcars needed repair, they were rebuilt to the full height of the 30-foot boxcars and renumbered in the 300 series with special purpose modifications. Cars Nos. 302-304 had end doors and six windows on each side for use as express cars in passenger train service. Many later cars of the 300 series contained stoves to keep potatoes from freezing during winter shipment. Ten of the 28-foot flatcars were rebuilt in 1910 as heated insulated boxcars Nos. 501-510 for potato loading. Boxcar No. 509 was rebuilt with hinged doors for cream car service after car No. 73 was destroyed in 1913. Flatcar No. 10 was rebuilt in 1913 with a derrick for placing riprap. The remaining three 28-foot flatcars were rebuilt in 1916 into express cars Nos. 80-82 with end doors and 6-foot-wide side doors. Combination No. 6 was converted to an express car by removing interior features and placing protective bars across the windows.

Wiscasset, Waterville and Farmington Railway locomotive No. 52, a Plymouth diesel locomotive manufactured in 1961. Photographed in the WW&F yard, Alna, Maine. The locomotive was purchased by the WW&F in 1996 from Carpenter Technologies, Pennsylvania.  August 1, 2004. 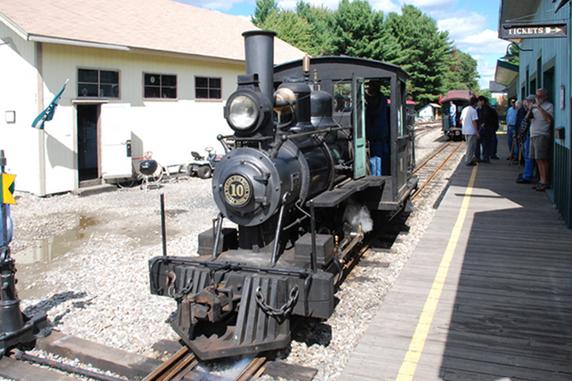 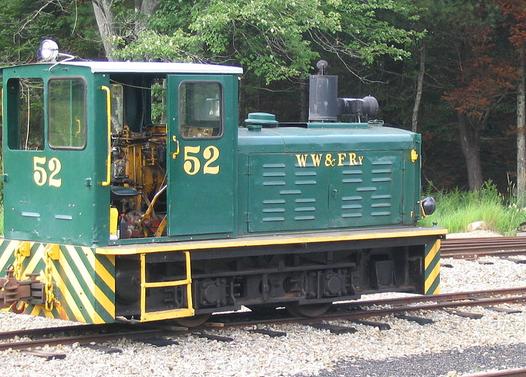 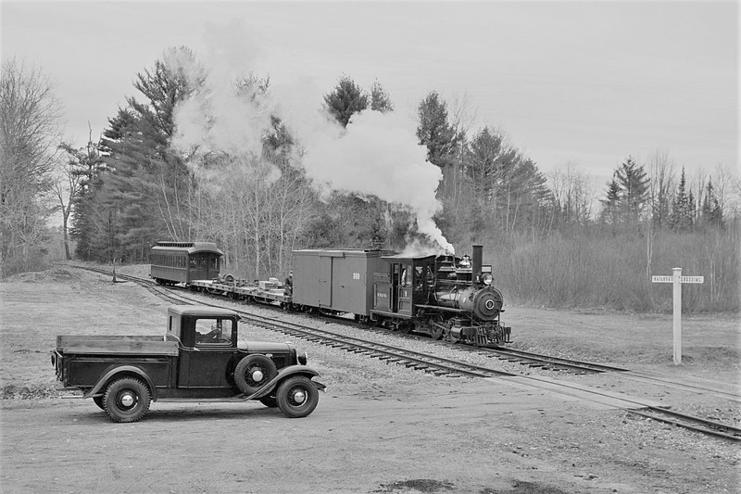 Wiscasset, Waterville and Farmington Railway, Forney No. 9 built by the Portland Company in Portland, Maine, circa 1910.

Locomotive No. 10 of the Wiscasset, Waterville and Farmington Railway in September of 2007. No. 10 was built in 1904 by Vulcan Iron Works.
Gwernol [GFDL (http://www.gnu.org/copyleft/fdl.html) or CC BY-SA 3.0 (https://creativecommons.org/licenses/by-sa/3.0)], from Wikimedia Commons [Rotated, cropped]