Trains Magazine
Trains is a monthly US magazine about trains and railroads. The largest and oldest North American consumer magazine on rail transportation, it is one of two flagship publications of Kalmbach Media, based in Waukesha, Wisconsin. It is aimed at railroad enthusiasts and railroad industry employees, the magazine primarily covers railroad happenings in the United States and Canada, but has some articles on subjects on railroading elsewhere.

Jim Wrinn, formerly of the Charlotte Observer, was named editor in 2004. Former editors are: 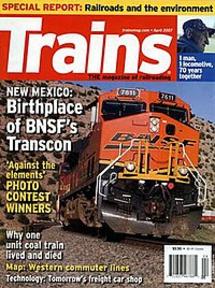