Gondola
In US railroad terminology, a gondola is an open-topped rail vehicle used for transporting loose bulk materials. Because of their low side walls gondolas are also suitable for the carriage of such high-density cargos as steel plates or coils, or of bulky items such as prefabricated sections of rail track.

History
Before the opening of the Baltimore & Ohio Railroad and the Chesapeake & Ohio Canal in Harpers Ferry, Virginia (now West Virginia), considerable amounts of coal were carried via the Potomac River. Since timber was an abundant resource, flat boats, called "gondolas" (a spoof on Venetian rowing boats), were constructed to navigate the "black diamonds" down river to markets around Washington, DC. There, both the boat and cargo were sold and the boatmen returned home by foot. The railroad cars first employed in the haulage of coal were thus named after these shallow-draft boats called "gondola cars".

Early gondola cars typically had low sides. Their contents had to be shoveled out by hand, and they took a long time to unload. In 1905, the Ralston Steel Car Company patented a flat bottom gondola with lever operated chutes that allowed the gondola to be unloaded automatically from the bottom. The chutes would direct the contents of the gondola to the sides. This coincided with the switch from wood to steel freight cars, as the pulling force of locomotives tended to crush the older wood cars.

A mine car or ore car are smaller gondolas used to transport ore or other contents in mines. Most mine cars are built with the ability to tip out their contents.

Bathtub gondolas
In the second half of the 20th century, coal haulage shifted from open hopper cars to high-sided gondolas. Using a gondola, the railroads are able to haul a larger amount of coal per car since gondolas do not include the equipment needed for unloading. However, since these cars do not have hatches for unloading the products shipped in them, railroads must use rotary car dumpers (mechanisms that hold a car against a short section of track as the car and track are slowly rotated upside down to empty the car) or other means to empty them. The term "bathtub" refers to the shape of the car. 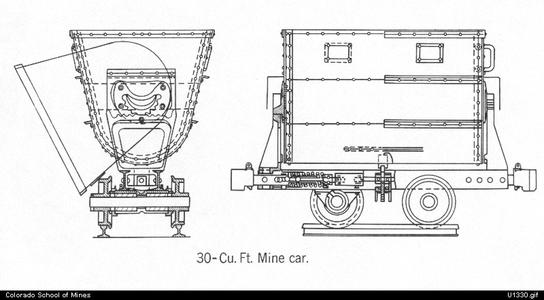 A side-dump gondola on display at the U.S. National Railroad Museum.

A bathtub gondola passing through Rochelle, Illinois, in 2005.

By The original uploader was Slambo at English Wikipedia. - Transferred from en.wikipedia to Commons by IngerAlHaosului using CommonsHelper., CC BY-SA 2.0, https://commons.wikimedia.org/w/index.php?curid=9391897

By The original uploader was Slambo at English Wikipedia. - Transferred from en.wikipedia to Commons by IngerAlHaosului using CommonsHelper., CC BY-SA 2.0, https://commons.wikimedia.org/w/index.php?curid=9399189​