Short Line Railroads
A short line railroad is a small or mid-sized railroad company that operates over a relatively short distance relative to larger, national railroad networks. The term is used primarily in the United States and Canada. In the U.S., railroads are categorized by operating revenue, and most short line railroads fall into the Class III or Class II categorization defined by the Surface Transportation Board.

Short lines generally exist for one of three reasons: to link two industries requiring rail freight together (for example, a gypsum mine and a wall board factory, or a coal mine and a power plant); to interchange revenue traffic with other, usually larger, railroads; or to operate a tourist passenger train service. Often, short lines exist for all three of these reasons.

Short Line is also one of the four railroads in the popular board game Monopoly, named after the Shore Fast Line, an interurban streetcar line.

History
In the beginning of the railroad age, nearly all railway lines were short lines, locally chartered, financed and operated; as the railroad industry matured, local lines were merged or acquired to create longer mainline railroads.

Especially since 1980 in the U.S. and 1990 in Canada, many short lines have been established when larger railroad companies sold off or abandoned low-profit portions of their trackage. Short line operators typically have lower labor, overhead and regulatory costs than Class I railroads and therefore are often able to operate profitable lines that lost money for their original owners.

Classification
Because of their small size and generally low revenues, the great majority of short line railroads in the U.S. are classified by the Association of American Railroads as Class III. As defined by the Surface Transportation Board, a Class III is a railroad with an annual operating revenue of less than $28 million. In Canada, Transport Canada classifies short line railroads as Class II.

There are three kinds of short lines in the U.S.: handling, switch, and ISS (Interline Settlement System).

Switch short lines are similar to handling short lines except that they are listed on a railcar's route, and they collect a fee for each car they move on their tracks.

Statistics
It was reported in 2009 that short-line railroads employ 20,000 people in the U.S., and own 30 percent of nation's railroad tracks. About a quarter of all U.S. rail freight travels at least a small part of its journey over a short-line railroad.

American Short Line and Regional Railroad Association
The American Short Line and Regional Railroad Association (ASLRRA) is an association of North American short line and regional railroads. Members include a variety of Class II and Class III railroads. The ASLRRA acts as a lobbying group for member railroads, representing them for both legislation and regulation. Since 1998, they have also been awarding the Jake Award - recognizing railroads for their safety record which had originally been started by L. S. “Jake” Jacobson.

ROAD BLOCK: The mystery shortline railroad locomotive has made it past the bridge and through the dense brush and is now crossing the Dwight Mission Road to reach it's customer. I'm not sure if the engineer is giving me a friendly wave or telling me "I'm number one". In the end, it was me that provided him some entertainment. For some reason, right after this picture was taken, my car decided to leave without me. My car slipped out of park and decided to roll down the highway on it's own. Fortunately, I was able to catch it, and by that time the locomotive was parallel to me. The engineer leaned out of his cab and shouted "Great Catch!". I smiled, gave him the thumbs up, and sped off in embarrassment.  This is an EMD GP7 which belonged to the Southeast Kansas Railroad (reporting mark SKER) and is now part of the South Kansas & Oklahoma Railroad. - Doug Wertman.    By Doug Wertman (Flickr: Road Block) [CC BY 2.0 (http://creativecommons.org/licenses/by/2.0)], via Wikimedia Commons 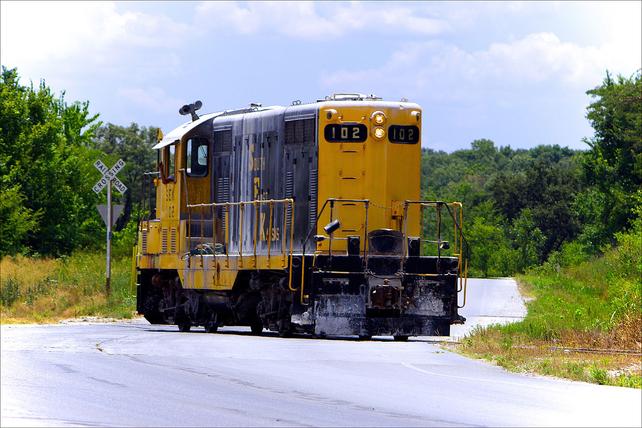