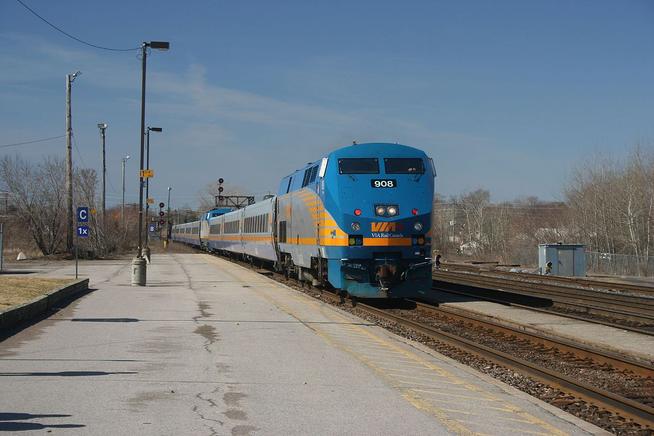 VIA Rail trains 42 and 56 arriving in Belleville from Toronto. 42 is leading, 56 is behind the second locomotive. Train 42 will terminate in Ottawa, train 56 in Montréal.      By Robert Taylor - originally posted to Flickr as VIA Rail Belleville_0002, CC BY 2.0, https://commons.wikimedia.org/w/index.php?curid=7483134

Train Travel in Canada
Although trains are not nearly as ubiquitous and convenient a mode of travel in North America as in Europe or East Asia, they remain popular with some travelers because of the spacious design of the cars, the scenic routes, and the overall comfort of the train ride. Some people prefer to take trains because they do not require long waits at security like at airports, or because they are uncomfortable with flying. Unfortunately, unlike their European counterparts, passenger trains in Canada outside the urban cores can often be off-schedule, sometimes up to several hours late. Train rides in Canada often take much longer than car rides and plane rides, but, when the service is running well, the unique experience can trump the long ride.

All trains will have coach seats. For longer rides many trains have sleeper rooms. The price of these rooms depends on the quality - whether or not there is a sink, or a private shower/toilet. You will pay a considerable supplement for sleeper car service in addition to the regular fare.

Canada's railway system primarily transports freight, and freight has priority over rail-line use. Therefore, passenger trains are sometimes delayed. The country's two major railway companies, Canadian National Railway and Canadian Pacific Railway, turned over operation of their passenger services in 1978 to VIA Rail Canada, which was designed with the American role model Amtrak in mind. In addition to VIA Rail, a few smaller railways in remote areas of Canada also offer passenger service. Montreal (AMT), Toronto (GO), Ottawa (O-train) and Vancouver (West Coast Express) have commuter rail. A large number of companies offer excursion services primarily geared towards sightseeing and tours; in Calgary an expensive, seasonal private tourist train to Vancouver is the only scheduled intercity passenger rail.

For travel within Canada, the passenger rail system is (for the most part) a monopoly. For long distance travel, it can cost more time and money to travel by train than to fly; for short trips, it's usually cheaper to take the bus. Outside the Windsor-Quebec corridor, trains can be considered to be more hotels on tracks rather than a way to get from city to city. These trains offer comfortable seats or sleeping accommodations, unique scenic views, and meals at a premium price, if you have the extra time for the experience. Within the Quebec City - Windsor corridor, VIA Rail is more comparable to air travel; train travel will still take more time than flying, but taking the train in this region can be significantly cheaper than flying, considering baggage fees and taxi fares to and from suburban airports.

In a few remote regions, such as Churchill in northern Manitoba, rail has been left in service as it remains the only terrestrial means to reach a remote community. Conversely, a growing list of destinations (such as Prince Edward Island and the island of Newfoundland) have lost all rail service and rely instead on the Trans-Canada Highway or other road, ship or air transport.

Peak periods
The peak periods for most rail companies in North America are somewhere between March/April and September; however, you should check with the rail company. In the off-peak season, prices drop significantly on most carriers.

Tickets and passes
Canrailpass is valid on any train and route that VIA Rail operates and allows the holder one seat in Economy class (upgrades are limited). The pass allows passengers seven, ten or unlimited one way trips (with one stopover per trip allowed) within a 60 day period.

Discounts
VIA Rail offers discounted fares to youth and seniors:

Additionally, passengers may be entitled to unadvertised discounts on top of these fares by being a veteran or member of the Canadian Forces, or through membership to some organizations and professional/alumni associations. At 2014, Hostelling international members are also eligible at 10% discount from Viarail.

Discounted, non-refundable VIA Rail tickets are available in limited quantities with various conditions when purchased in advance, and "Express Deals" provide sales of up to 75% on certain trains when purchased online.

Ontario Northland Railwayis owned by the province of Ontario, and operates the Polar Bear Express tourist train (Cochrane-Moosonee) in the remote northern part of the province.

Canadian Pacific Railway (CPR) turned its passenger services over to VIA Rail in 1978 (and most were eliminated in 1986), but inaugurated its luxury Royal Canadian Pacific service in 2000. A limited six-day, five-night 31-passenger tourist train with 19 restored staterooms using 1919-1931 era rolling stock, this Calgary-Vancouver luxury run is niche marketed at typically $8,000/person; passengers must be 18 or over.

Amtrak operates trains from the U.S. To Canada on three lines. From Seattle to Vancouver on the Cascades; from New York to Toronto on the Maple Leaf; and from New York to Montreal on the Adirondack.

Tshiuetin Rail Transportation, ☎ +1 418 962-5530, toll-free: +1 866-962-0988, e-mail: billetterie@tshiuetin.ca. 10-12 hrs of spectacular scenery from Sept-Îles to Schefferville, an otherwise-inaccessible mining community in northern Québec. This line is owned by three First Nations (Aboriginal) groups. This line does not connect to the rest of the North American rail system.

Routes/lines
VIA Rail Canada
The Canadian, runs from Toronto to Vancouver via Sioux Lookout, Winnipeg, Saskatoon, Edmonton, and Jasper. VIA Rail's flagship service and now the only remaining service to cross Canada's prairies. The complete journey takes three days. A seat in Comfort (economy or coach) is around $550 before discounts; comfortable sleeper accommodations are also available.

The Hudson Bay. Connecting with the Canadian in Winnipeg, the Hudson Bay takes travelers from the south to the far north of the province of Manitoba, with three departures a week to Churchill via The Pas and Thompson. Native-owned Keewatin Railway Company operates a subsidized connecting service from The Pas to Pukatawagan  which reaches isolated native communities in that region of Manitoba. The train to Hudson's Bay is popular with winter tourists who travel north to see Churchill's population of polar bears and tends to sell out early.

The Skeena. The Skeena connects with the Canadian in Jasper National Park and operates to Prince Rupert. From Prince Rupert one can take ferries to Alaska or Queen Charlotte islands.

Quebec-Ontario Corridor. VIA Rail offers its most comprehensive intercity passenger service between the cities of Quebec City, Montreal, Ottawa, Kingston, Toronto, Sarnia, and Windsor. This route operates more than 30 departures in either direction on weekdays, and is popular with business travelers and tourists due to fast services that are, in most cases, as fast downtown-to-downtown as commercial airlines.

The Ocean. Six departures a week make the journey from Montreal to Halifax via Riviere du Loup, Mont Joli, Campbellton, Moncton and Truro. The train operates with modern European Renaissance cars, famously purchased by VIA Rail when planned sleeper services through the Channel Tunnel from Great Britain to mainland Europe were cut.

Special stops
VIA Rail offers hikers, kayakers and residents of remote regions the option of special stops at almost any point on several rural routes, as long as passengers purchase their tickets and specify their exact destination 48 hours in advance. This is not available on all routes: most importantly, the Quebec-Ontario corridor is excluded, as are the prairies west of Winnipeg. Please consult the link for more information on stops that are permitted.

Bicycles
From the beginning of June to the end of October, VIA rail now allows cyclists to bring their bikes as is aboard trains running in the Corridor to Toronto, Montreal, Ottawa, Quebec City, London, Windsor (Ontario), Jonquiere, and Senneterre. There is a fee of $20 plus tax for each direction of travel and you must check your bicycle at the baggage counter one hour before departure. After that, you are not guaranteed a space for your bike. Upon arrival at Toronto, Ottawa, London, Windsor, or Montreal, the train crew will bring your bike to you at the baggage claim area in the station. At all other stops, you might have to go to the baggage car to retrieve your bike. Do not leave any equipment (i.e. pannier bags) attached to your bike when you check it in. These must be checked in separately. Check the VIA rail website for train schedules with bike racks.

During the weekends in summer from last weekend in June to Labour Day weekend as well as Victoria Day weekend (third weekend in May) and Canadian Thanksgiving weekend (second weekend in October), GTA commuter rail operator GO Transit offers a special excursion train from Toronto Union station to Niagara Falls four times a day on Fridays, Saturdays, Sundays, and legal holidays (Victoria Day, Canada Day, Civic Holiday, Labour Day, and Thanksgiving Day). These trains feature special bicycle cars which have bike racks on the lower level and seating on the upper level. You can recognize them by the bicycle decals on the sides. There is no additional charge to bring your bike aboard and space is given on a first-come-first-served basis. These trains make intermediate stops at Exhibition, Port Credit (Mississauga), Oakville, Burlington, and St. Catharines.

Train Travel in the U.S.A.