The Trainphone antenna can be clearly seen on this Louisiana & Arkansas (KCS) EMD F3.

A pair of PRR E8 passenger locomotives (No. 5802 leading), class EP22, are at Dayton, Ohio Union Station, February 5, 1956. The Trainphone antennae can be seen atop both locomotives. 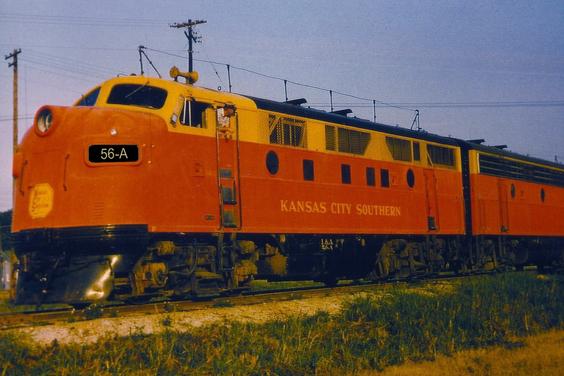 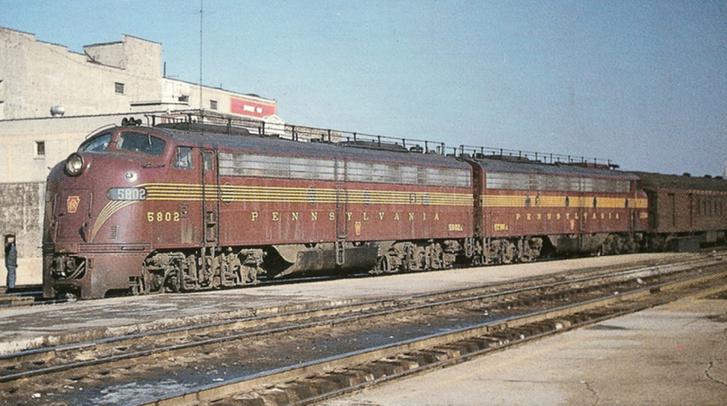 Trainphone
Trainphone was the Pennsylvania Railroad's system for voice communication between crews on moving trains and dispatchers, tower operators and such. It was also used by the Kansas City Southern, and to a lesser extent on the Duluth, Missabe and Iron Range. It did not use radio, but rather electromagnetic induction. Railroads did not own any radio frequencies at the time, and the PRR's busy network found the previous methods (passing a physical paper message, or requiring a train to stop to pick up orders) insufficient. The trainphone system was first trialed in 1936 and perfected by 1943.

Equipment
Shore transmitter
The system used the track itself, or lineside telegraph wires, as the "shore" transmitter. The trainphone signal — low frequency current in the hundreds of kilohertz — was passed through the track or wires and induced a corresponding current in the locomotive or car's receiving antenna. The range was only a hundred feet or so, but this was sufficient.

Antenna
Mobile trainphone antennas took the form of long, handrail-looking structures atop the tender of steam locomotives, atop the bodies of diesel locomotives, or running the entire length of a cabin car (PRR lingo for caboose).

Telephone handset
The engineer or other crew member would talk through a regular-looking telephone handset. An attention loudspeaker was also installed, but it was easier to hear the messages with the handset.

Problems
The biggest problem with the trainphone system was that it could not work in electrified zones, because of interference from the electric supply and electrical equipment on the locomotive. Since the electrified zones were among the PRR's busiest, this was a serious disadvantage.

Replacement
The trainphone system was abandoned in the 1960s as radio took over.